I’m not sure how he’d look in a toga. No, I am not sleep-deprived or sillier than usual.

I’ve become a fan of the writings by London Mayor Boris Johnson. I’m planning a later essay about his book The Dream of Rome.
Rome never really caught my interest before. Thanks to Boris Johnson, it does now. I was reading about how Caesar, who was very wealthy, was working to become a populist leader. 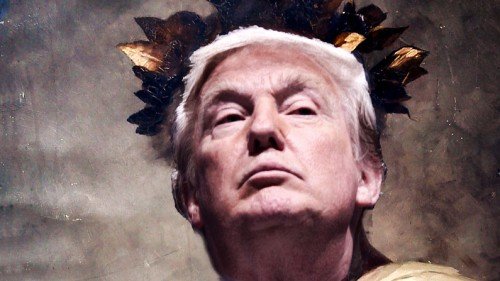 When Donald Trump threw his hat into the seventeen ring Ringling Brothers Barnum and Bailey Circus, also known as the Republican Party Presidential Debates.
There was The Donald, traveling to Laredo, Texas with a ball cap and an open shirt. I took a Latin American History class in college. All I could think of was Juan Peron.

Going back to the Roman Republic, Caesar’s populism scared the more conservative senators. Rome overthrew its last king in 509 B.C. Many thought Caesar wanted to be a dictator.

Donald Trump can stay in the race as long as he likes. The outrageous things he says are hitting certain nerves in our society.

We have gridlock in Washington. We have legislative warfare. Rome was in an ongoing civil war for a century. People are groping for someone.

Mr. Trump hasn’t claimed he is Caesar. I probably shouldn’t give him any ideas.

Benjamin Franklin said, “We have a republic if we can keep it.