I went to a Black Lives Matter rally at the University of Arizona. OK, so did many others.

I want to start this with some personal background, so you’ll understand why I went and why I came to these conclusions.
I saw demonstrations when I was attending City College of New York in the ’70s. In 2008, I attended the Tucson Citizen’s Police Academy.

These are two things you need to understand to get some of my reactions. There will be sarcasm and personal views you’ll not like. You’re welcome to respond to me in a civilized manner, and I will answer your questions. I’m also a history buff and like to analyze and ask questions. Nothing is black and white, in this case, no pun intended, but various shades of gray.

When Black Lives Matter first came about, my initial reaction was, “Don’t all lives matter? What am I, chopped liver? See, I took it literally, at first. Black lives were more important than mine. Not what they mean. They mean Black lives haven’t mattered to many in the United States. 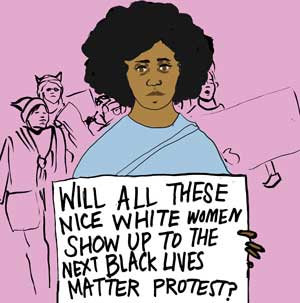 This cartoon describes what led me to go.
Understand, I am writing about what I know, the United States. I’d love to hear people in other places describe their reactions.

Anyway, what sparked me to go was the killing of George Floyd. You don’t need me to repeat the story, but it was obvious you could tell the police officer kneeling on his neck didn’t care about Mr. Floyd. This will come out in former officer Chauvin’s trial, where supposedly, both men worked security at a Minneapolis nightclub. Was there already bad blood between them? Was it racially motivated? It was definitely murder. He was in custody, no need for what was done.

Anyway, this is what convinced me to attend the rally. I hadn’t been to Downtown Tucson in months. I was sad to see the boarded-up stores, where Downtown had looting. I understand anger, but looting stores doesn’t help.

I walked through the main gate of the University of Arizona. The rally was held in front of the Administration Building and to the side of the Student Union. There were thousands of people there. Ten thousand is a good possibility. Mostly white kids, possibly mostly students at the University. They had all sorts of signs.

Most I couldn’t disagree with—the basics: Black Lives Matter, an end to white privilege. I never thought of myself as having privilege. To me, that meant a family like the Bush family. You know, the one that produced two Presidents of the United States. The right prep school and connections, etc. OK then, what is white privilege? On a crude, simple level, I am less likely to be profiled by a police officer. You don’t hear “Driving while white.”

If I’m going to be discriminated against, it’s on an economic level. Not my skin color.

Now the signs and rhetoric that bothered me. Picking on the police as a group is a bad thing. The speakers saw it as a good thing there wasn’t a police presence at the event. I’m sure the crowd had plainclothes police scattered around. Many of the young people had signs demanding to defund the police.

Police misconduct led to rallies like the one I attended in the first place. Now, you will understand why I bring up the Tucson Citizens Police Academy.

I attended so that I could write my mysteries more effectively. I met some amazing police officers who enjoyed what they did. I didn’t grow up around cops, so it was educational. These kids’ lumping all police together is just as bad as lumping all blacks together. The majority of good cops in a perfect world should speak out against bad cops, but I also understand why certain parts of police culture don’t allow this.

The good cop may have had to depend on a cop like the one who killed George Floyd. People at this rally would not have bought this. As cops were picked on, and young people held up signs demanding the defunding of the police. This is serious. Minneapolis City Council is talking about getting rid of its police force. I looked at the young blonde college girls and smiled. How long will they want that, until they are attacked in and around campus?

Then the speakers talked about “The system.” The group was led in the song Lift Every Voice and Sing. Almost everyone’s fists went up. Sorry, as a Jew, I think the Nazis. Someone sang Billie Holliday’s Strange Fruit about lynchings, a shameful part of the American past. Why a museum dedicated to it in Montgomery, Alabama, was opened.

There was an eight-minute and forty-six-minute silence, the amount of time the cop kneeled on George Floyd’s neck. That’s a long time to be quiet, especially in a crowd that large.

The African-American speakers on stage were angry. They certainly have a right to be angry. They were also mad at the predominately white crowd, also rightly so, feeling whites are getting involved now, where were we before? They have a point. They are also angry that black people have to lead the way to stop racism.

In my eyes, black people are going to have to ask for and how they want the rest of us to help. They also stated we were on stolen land from the Native Americans. That’s a different conversation. For my fellow Americans, raise your hand if you don’t want to be here. We have to help the Native Americans any way we can. Human beings have conquered one another since the beginning of humanity.

Then, one of the speakers told the crowd not to vote in November, saying it doesn’t help, and the entire system needs to be overthrown. I thought, with what? They were vague about that.

Half of me was afraid. The other half thought back to my City College days. I went to the same college as my father. The anti-Communist in me looked at him, stunned. “They have Communists and Socialists at City.” My dad, who had been in ROTC, burst out laughing. “I’m glad to see some things don’t change.”

Sorry for the detour. The fearful part is what my old age is going to be like. I’m sixty-three. Would I have to live out my final days in a shack in a small town like Arivaca, waiting to be attacked? This is Arizona. I can be armed to the teeth if need be.

Then I smiled inwardly again. How many of the same kids, will graduate, not think of white privilege, get a top-level job, talk about this rally twenty-something years from now with a smile. Ah, the passion of youth.

There was also a Monty Python-like feel. All the different subgroups there, like the LBGTQ. All that came to mind was the Life of Brian, with their parody of the various subgroups.

To conclude, some of you may be wondering, why did I bother going? My gut is to be kind and easygoing, not wishing anyone harm. I realized I couldn’t just say Black Lives Matter without making an appearance.

It went from Three to Six PM. People came around spraying people and with water: beautiful blue skies and hot. I had to make some sacrifices on a hot, June day. It was a day of sacrifice which wasn’t talked about. It was D Day.

About five-fifteen, my gut told me time to leave. As I crossed Second Street and the streetcar tracks, on my way to the Speedway bus, three police motorcycles stopped for me. I waved, they waved back—human contact.

I read this morning, several hundred protestors broke away and went toward Downtown where a police line stopped them.
Would I go again? Yes. Did I agree with the rhetoric? No. 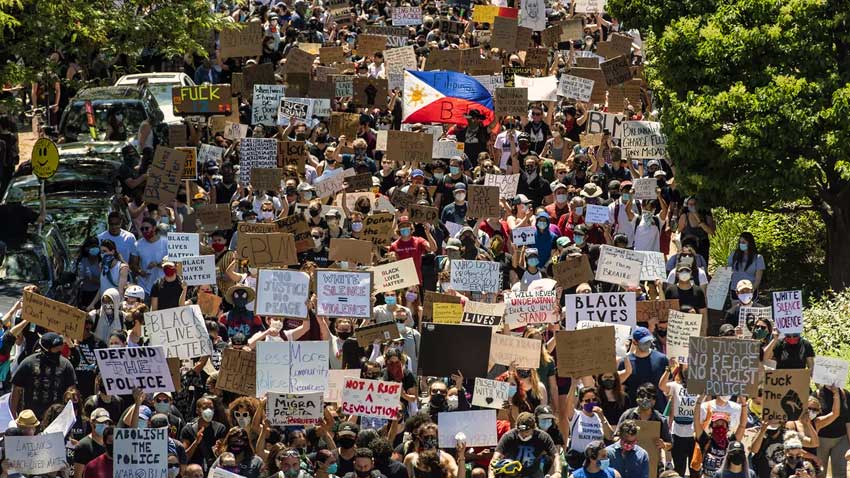