Stepping Stones: One of my goals in writing has been to describe the process. Not only the feelings but the actual stepping stones we’ve taken as we’ve made our way on this twisty new road.

The road begins to dip and travel away from you the moment you suspect a problem. For me, it began in the fear-filled days that somehow played out dripping slowly like Atumn-frosted molasses and yet blew in and swept across our lives in the sudden shrieking winds of an unannounced tornado. 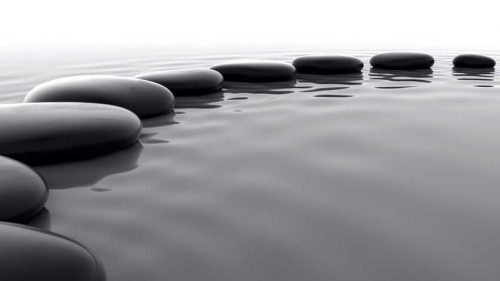 In those early days, there was soul splitting sorrow in watching him refuse to turn to the sound of his name and the final death was found in the sudden snuffing of the light that had once so prominently shown in his eyes. Slowly that light sputtered and died away. There has been nothing in my life that ever prepared me for the sadness of watching my baby’s eyes softly widen as they somehow emptied as he stared away, miles from me into the wall.

Oh yes, that was bad. But, the way of the new road becomes even less defined the moment that is lived when somebody smiles pleasantly at you and begins to tell you that your soul whispered fear has come to pass. Autism has actually come to pass and not just maybe, not even almost, but absolutely it has solidly come to pass. When you find that you have had a special needs child, well, it is in the depths of that howling silence that follows that the journey begins.

I have said it before and I will say it again that it is exactly like being dropped in a different country where the language and the customs are completely alien to you. It is shockingly swift and there is no preparation at all for it.

I did not even know the things I didn’t know or even where to make my barest beginnings when I was first dropped here. It was initially one of the most frightening places I’ve ever been because I didn’t know which direction to go or even who I should ask. I didn’t even know if there were people to ask. Not only was it scary but it was overwhelmingly shot through with bleak black and white facts and numbers. They were stark and hard-edged and left little room for hope.

The despair and sorrow, in the beginning, has marked my heart forever. I’ve never known pain quite like that and I hope I never do again. Finding services and a plan on which to set my precious child who is dependent solely on me has been a frightening thing. And for me there was the wondering if I could even do it at all. The depression of that question was a hard thing to shake. No, is, a hard thing to shake.

We are a working-class family who had already made the decision that I would stay home and raise this long-awaited baby even before we knew of his needs. That has meant sacrifice for us. Things we see other families seek and reach for and easily attain have to be planned and carefully worked for if we are to have them. This is in no way a complaint it is a simple statement of fact. We are proud that we have seen this choice and the standard we live by through. We appreciate every single thing we have because everything we have is worked for.

When Nicholas was diagnosed our budget groaned at his added needs. It was decided that for now, for today, in order that he should get the best care we will seek SSI benefits and insurance coverage. We hope and plan to see this change but there is no question that as of now we must ask for help from the system that our work has paid in to. But, that added another bout of weeping for my soul. A mind sapping sorrow at what we’d have to ask. It’s taken me nearly a month to recount this so hard has it been to shake the feelings. Social Security is not a fun place to be.

It wasn’t made pleasant either. When we walked into the Social Security Office our bags were searched and our drivers’ licenses checked and the numbers recorded by the longest faced security guard I’ve ever seen. There was not a single hint of a smile or anything at all that would mark him as a sensate individual at all. I suspect he shut those parts of himself away in the locker with his lunch. While I immediately could understand how this could be born in him as I looked around at the huddled sea of seeking and needing humanity that lined the chairs, floors, and walls I couldn’t help but think he enjoyed it too.

He sent me out to the car with Nicholas’s juice and crackers that were not allowed in the building. When I returned not two minutes later he would not let me in until my husband brought my ID card that I had left in my purse in the building with him. We went through the process of recording my number again. He warned my husband that his cell phone could only ring once and that he could answer hello on his way out the door but would be asked to leave if it rang or he said more than that. As he said these things he moved away and stood there, throwing his tall shadow over the loveliest little blond toddler girl of Polish descent and quietly but firmly told her she could not rest her tiny feet on the chair next to her dad. He repeated it to the dad who clearly did not at first understand. The guard moved closer and rudely, widely, pantomimed brushing the child’s feet from the chair. They finally complied.

I watched this guard many times tisk tisk and shoo people and children during our 45-minute wait. Even with our appointment, there was a long wait for us. Yes, the office was quiet and a tight run ship. But, I could not swallow around the shamed lump in my throat. My back was rigid and straight and my eyes dry like they had been lined with sawdust. For a few minutes, I even felt myself grow angry at my husband as I carefully checked Neeko’s feet stayed off the chair. I wanted badly to walk out and never go back.

When our name was called the process lightened. The lady who met with us from behind a plexiglass window was kind-faced and light voiced. She took our information quickly and methodically and plowed right through all of the places we had thought would be complicated.

Again there was that stiff high breeze blowing surprise strength of grit in my eyes as we didn’t almost qualify, we solidly did. Every step on our path hammers home our reality and sometimes it sounds just like a nail being pounded into a lid that is closing over my head.

Before I left I asked the woman behind the glass window for the security guard’s name. On my way out I said “Goodbye Harvey, have a nice day” and I gave him a wide soft smile. He blinked for a moment and something glimmered there then got carefully squelched as he did not respond. Ahh, but I saw it, I saw his humanity.

So what I want to say is if you are new here you aren’t alone. You’ll find others here who know. Those who’ve walked these steps. When you do find them the language difference becomes more of a dialect problem and the further you go the more you will understand.

There are layers of shock, deep padded pockets to the mourning and the sorrow of slow oozing grief. Every new place you step feels strange and maybe even there are places that kick up an oddness that touches off shame as you reach out for help, help for your child, and help in understanding how to navigate this strange new path.

Every hurdle you pass- diagnosis, special needs schools, therapies, and insurance battles your heart will cry afresh at the permanence and tickle of shock that you really have wound up here in the very strange land of special needs.

You will fail yourself too. Sometimes it will be failure in the snapping sound of your own words of frustration that you might fling at your needful child, or your other children, at your friends, at yourself, or at your spouse. Even if these words never pass your lips you will probably be, at some point, shocked at the words you will think. You will fail at getting every single thing your child needs on some days. Some days you will fail as you fall tiredly into a chair doing by route just the barest things that need accomplishing. You won’t always be the person you set out to be.

But, you will be surprised at what you find you can find the strength to do, and you will be equally surprised at the things that threaten to overwhelm you. Your love will grow beyond your control. The pain and laughter will begin to combine. Some days will be great and the next you will wonder how you will manage. You will want to quit. You will also never give up. There will be times you will need to retreat inside to solitude and times you must step out. And you will go back and forth and in and out to return to each of those places again and again.

Through it all, it is true that nobody, even the people who know you best, will ever truly know how you are feeling. That is a very lonely windswept thing. But, in all of that, it is also true that you are not alone in this new land.

They will have been dropped in Holland still clutching their guidebooks for Rome. They won’t understand how they got here when they planned to be there. They will be in that fresh shocked pain trying to read the signs with grasses swirling high. They will be overwhelmed in the brand new wind. They will be watching everything they thought they knew, and begin to fly away.

In writing this I hope I leave behind a tiny slice of light to see the road by and maybe will cut just a step or two of the lonely pain away. Even if it is just in my saying I’ve been here too. I’ve had to do that too. I thought that too. I’ve felt it too.

I look at my boy and me and I see every reason to hope. It is my greatest wish to begin to pass that hope back out into the world. I want to spread a pathway made up of the steps I’ve taken. I want to say I am here too. I hope you will seek your own way to do the same thing too. It is an act that, for me, creates a meaning to this whole thing where once was there was none. An act that softens the angry wind. It is a purpose unlike any I’ve ever had.