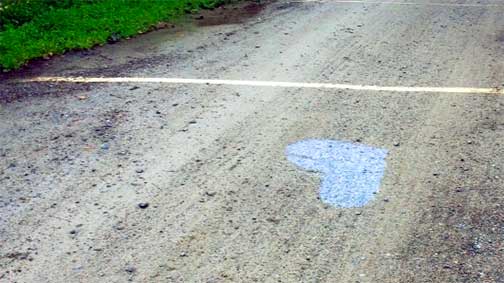 I turned forty-one today. It was a quiet start to my day this year.

It was, in fact, starting out much like any other Thursday. I was running late with getting my little guy to the school bus like I sometimes do. I could hear the bus outside of the gate from all the way across the yard. I was barreling up ahead trying to reach the gate and stifling my impatience. I quickly got to the fence and turned to find, with no surprise that Nicholas had been left behind.

I turned myself back to herd him up. I paused to watch my beautiful, serious-eyed, dreamer. He was watching his breath form magic clouds as he puffed out mighty braying “Haaaaas” of air from his lungs forcing them out to collide with the chilly December air.

In his hand, he was clutching a stick that was encrusted with frost and he was flicking it around watching intently all of the diamond glints and dazzles dance away into the sunlight. He was waving two of the frosted sticks that I’ve told him are winter wizard wands with all of his might, trying to cast a spell—some beautiful spell that would surely make the world a much better place. Whatever his wishes were they would include everyone else, I knew. That’s just how his heartbeats.

I hated to break it up. So for a moment I just watched like I often do. I listened as the bus lumbered itself all the way up the long dirt road and began pulling into the rumbling slow U-turn just before I knew I’d hear the long hiss and shuddering sigh of the air brakes sounding.

I walked back to him and I felt him pull slightly away like he often does when I break up the visions in his head with my touch. As usual, when so absorbed inside of himself he didn’t respond noticeably to me. I resorted to gently taking his hand and I began tugging him across the yard, fighting as always against the thick sun-warmed slow pooling molasses of Neeko time. I was tamping down my irritation at myself and silently repenting of my sins and cursing myself all at once for my distressingly, much too usual bad time management.

We were late and so my face was cast to my feet as I began a ridiculous plea to Nicholas in an inane over bright cheerleading chant. I began to smile like a cracked plastic mask-faced clown and to sing out in a silly rhythm, “Hurry, Neeko, please hurry!” which is the most useless stringing of words in the entire English language, to Nicholas. I might as well have looked at him and begun a long intricate exhortation of something equally profound and as ultimately meaningless in Swahili.

I was juggling all of this and all that rueful ironic stuff—and all of that chatter in my brain—and at the same time I was suddenly noticing odd things. My eyes were picking out a path of recognizable shapes that are not normally formed out of the natural earth.

I’m seeing things that have sharpened up out of the disorder and chaos forming themselves from out of the riotousness of the spent-out scattered leaves. I was finding a pattern in the crazy swirl of twigs, rocks, and in the dirt that lay all around me. Suddenly things began to bring themselves up and out popping into sharp focus as I hurried along.

I was seeing rocks, leaves, puddles, and wet and dry spots creating a pathway of perfect little hearts laid out upon the earth—-I suddenly began noticing them in a half-aware way. They were such tiny things coming up sharp out of the rest of the blur around me, but I was in such a hurry.

I could hear the bus perhaps about to pull away! Even as I noticed the hearts I began to dismiss them in favor of tugging Captain Placid Pants down the road. All the while I’m irritated with myself for cheating this beautiful kid who moves behind such a thin veil of our sometimes separated worlds of his wizard wands and chugging magic breath puffs. I’m moving on, irritated at my own impatience, and all the while I am begging him to hurry up and not miss the bus.

I was rejecting hearts and rushing along. I did that until I stepped out of the gate and onto the dirt road and I spotted an unmistakable heart that grew and sharpened as I approached.  It was made up of dry on wet in a road full of grooves and washboard runs, everything around it was in a tumult of crisscrossed disorder, and yet there it sat starkly. A dry spot of perfectly unmarred road and gravel amidst the damp all around it left over from last night’s rain.

It was perfectly contained within its own impossibility. It beckoned to me vividly. The nearer I got the more obvious it became. Its perfection defined with each step. It was pristine. Neeko, without me saying a word suddenly pointed his wizard wand stick and said “Oh!”

I had thought of my mom earlier. I had felt sad that she wouldn’t call me today on this first day of my forty-first year and sing the refrain from “It’s Cindy’s Birthday” to me nor would she be sending out a package tied with a ribbon made of gold. She wouldn’t in this year or in any other year hereafter—she, in fact, would not be doing those things ever again. It had been a total sucker punch realization this morning, but I got busy, and then like she comes and goes every day, she left my mind again.

Suddenly here was this heart from Heaven. Perfect and enormous and growing more precise with each step I took. I know it’s a small thing, and I’m not one to go looking for things from Heaven. I’m pretty practical, except when I’m writing bad poetry, or playing up fairy magic with my kids with winter wizard wands and sun dazzles, or helping them find Goldilocks

‘ bears, or leading the hunt for gold at the end of impossible to reach rainbows.

My personality sometimes seems like a study of incongruities to an outside eye but in-between my own ears I am actually annoyingly practical and sensible. I am often exasperatingly stubborn and I am always firmly earthbound.

I am usually, anyway. Until I found hearts on my birthday laid out in my path—-the only path she could know for certain I’d be on today.

I choose to see the hearts scattered at my feet to be markers that pointed the way to that sudden undeniably perfect one in the road. I believed they were a whispered happy birthday from Heaven—maybe just from mom. Maybe from Bella. Maybe from any of the beloved people lost to us in these recent months. Maybe from God. Maybe, even from all of them.

But, I know mom was there. I know she was leaving me a happy birthday wish. The hearts in my path said “Happy birthday Cynthia, I haven’t forgotten about today nor have I left you” in just the right way at just the right time. And, yes, Nicholas made the bus.

On my way home I snapped the picture of the big heart. I could not pick out the tiny scattered hearts in the yard again amongst the rocks and leaves. They seemed to have vanished upon my return trip, even though I was this time looking for them. I had walked the very same path earlier, the exact same way—but the cascade of tiny playful perfect hearts was gone. Only the one in the road had been left for me and it alone was what had remained.

My gift from Heaven was fleeting but it was more than enough!

Monica M. Brinkman Aug 24, 2014 2
Express Yourself in Writing I don’t know many authors who have not ventured into joining a writers group of some…
Psychology