“Oh my god! No! Please stop!” His screams were really distracting. You know, I liked being in the desert. It was very relaxing there. In the distance I saw a gazelle jump around. 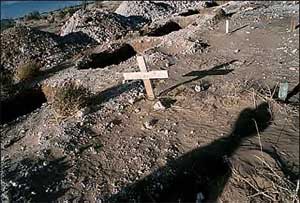 I tried to ignore his weak struggles and his crying voice. Pathetic. He really sounded like a little girl. I concentrated on the thick metal nail I was hammering through his lower right arm. The sound of the hammer hitting the head of the nail was in stark contrast to the softer sound of the nail moving through his flesh and into the wood behind his arm. I bet he did not see this coming when I met him for drinks earlier that day.

Little did he know about the drugs I put into his glass and the revenge I had planned for so long. It did not take him long to fall asleep after the drugs entered his bloodstream. Dragging him into the car was considerably easier than dragging him later through the desert sand to the spot I had earlier selected. The cross was already waiting for him. I felt it was a fitting way to send him off to hell. Nailed to a cross. After all, he always told me how he went to church every Sunday.

He really had no chance. The drugs I first gave him made him fall asleep, making it easy for me to bring him here. The drugs I then injected him with paralyzed his body for several hours. It was not as if he could not feel any pain. Oh no, I made sure the drugs I used only affected his movements. I wanted him to feel the pain. Every bit of it. I wanted him to feel the nails, the occasional hammer strokes that missed the nails, and the desert sun. Maybe I would get lucky and there would even be a desert storm. Maybe some desert animals would find him while he was still alive. I could not be sure how he would die, but I was sure that his fate was sealed. Finally, revenge was mine.”

Friendship is not always what it seems. And mixed with money, it often becomes a highly volatile mix that far too often explodes right in our faces. Read this Thriller based on true events and emerge in the life and challenges of the author. A roller-coaster of emotions and events that will surely keep you fascinated. It is often heard that the higher we fly the deeper we can fall. In this book, this is exactly what has happened.