The exotic recipes have been complied by Burga the Warrior-Cook.  The recipes include favorite dwarf, troll and zaftan recipes. 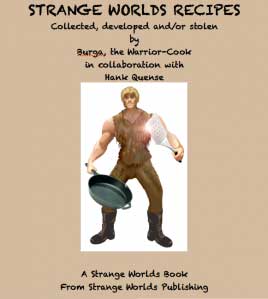 The best thing about the cookbook is that it’s free and available only from the Strange Worlds Online website.
If your searching for something different to cook for dinner then this cookbook is what you need.  It contains sixteen recipes from Gundarland and Zaftan 31B, both of which are in a parallel universe not too distant from our universe. Learn what elves, dwarfs, trolls and even the Zaftan aliens eat and enjoy.

Follow this link to get your own FREE copy of this innovative cookbook.  Use it to host amazing dinner parties for your friends and relatives.

My Feelings on a Page

Hank Quense Nov 19, 2019 0
Once you completed your NaNoWriMo project, it’s time to start thinking about what to do with the manuscript you…
Writing