I was out in the back yard shooting baskets with some of the boys from the neighborhood.  It was a crisp, sunny fall afternoon, sweatshirt weather, and I was feeling great about life.  I had finally gotten the knack of the jump shot, and was really proud of myself.

The back door open, my Dad called out, “Son, come here a minute.” I walked over to him, breathing hard from the exertion. 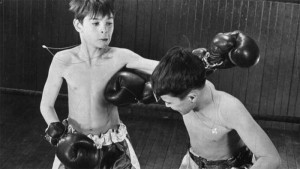 “Get your jacket, we’re going down to the Y.”

“I’ve signed you up for boxing lessons,” he said, in that tone like when it was time for me to get a haircut; no more talk, this is just the way it is, just do it!”

So I said nothing and went along, puzzled.  I was 11, in the 5th grade, but I hadn’t been in trouble or getting in fights or anything.  But boxing was important to my Dad, I knew that.  A ritual at our house was to watch the Gillette Friday Night at the Fights.  Dad had boxed in the Marine Corps while he was stationed in Hawaii.  But I had never particularly gotten off to the idea of getting hit; volunteering for it seemed especially bizarre.

So I started taking boxing lessons at the local YMCA.  Twice a week, after school, my Dad would drive me down and hang around watching me for an hour, while I went through a rudimentary boxing workout – sparring, heavy bag, and a little, very little, coaching.  It only confirmed that I didn’t like being hit, so one day in the car, I asked him about it.

“Dad,” I asked, “why am I doing this boxing stuff, you know, taking these lessons and all?”

He looked awkward and embarrassed, the way he did when talking about anything more personal than the World Series.  “Son, knowing how to defend yourself is something a man needs to know.  I thought it was time you learned it, and that this was the best way to do it.”  He patted me clumsily on the shoulder.

I sensed that fighting was the proving ground – the entrance test to manhood.  But from what I saw of the kids at school who fought a lot, if you won, the good feeling lasted a minute, if you lost, the defeat burned deep.  It looked like a neverending test.

After about two months of lessons I found out that Dad had entered me in Fight Night – an amateur fight card held one Friday night a month at the YMCA.  I knew there was no way in hell I wanted to do that.  When he told me, my mouth fell open, my eyes widened, and I started to say something.  I looked at him and saw the determined set of his jaw and the knitted brow – his “because I say so” look.  So I said nothing.

Friday afternoon.  The afternoon of Fight Night.  My mouth was so dry I couldn’t swallow – somehow it had just become real that I was going to go through with it.  Dad brought home my equipment – bright red trunks, baggy on my skinny frame, a red silk T-shirt, mouthpiece, and a jock strap.  It was my first experience of a jock strap, and it increased my dread – if you needed to protect yourself “down there,” the whole business took on a deadly air.

I don’t even remember driving to the Y.  The first thing I remember was sitting in the locker room – mingled smells of sweat, analgesic, and an aura of fear.  I could hardly look at the other boys sitting around on benches, each of us in similar gear.  The shiny new red boxing gloves I wore looked huge and ominous as I stared down at them.

I could hear the murmur of the crowd outside, periodic bells, clapping and cheering.  My Dad was not around, but I knew he was out there, in the crowd, watching.  I had never been to Fight Night; I had no idea what to expect.

It came my turn; I felt numb.  I walked out of the locker room.  The gym was darkened, except for the bright band of yellow, musty light shining down from the ceiling on to the ring.  The ring was fenced with ropes, elevated, separated from the crowd.

I walked mechanically down the long darkened aisle, the crowd a looming yet physical presence on either side of me.  I climbed up the steps, ducked through the ropes and into the ring.  My opponent stood shaking his arms in the blue corner, but I could not meet his eyes.

I felt exposed, vulnerable.  I could see no one outside the circle of light, but heard the rumble, could feel the people, most of all could sense my Father, expectant.

We were to fight 3 two minute rounds.  The referee called us to the center of the ring, and we stood, two young boys, one in red, one in blue, facing each other – and the test.  We touched gloves and went back to our corners.

The bell rang and I moved slowly toward him.  He lunged at me and began hitting me in the face and stomach.  I stood numbly and took it, hardly throwing punches, forgetting all I’d learned, too scared to move, hating the pain, feeling the hurt.  It felt interminable, yet suddenly a bell rang and I was on a stool in the corner.  I wiped my nose on my glove and horrified, saw a dark smear of blood.

The bell rang and it started again.  I began crying; I just wanted it to stop.  Suddenly the hitting stopped and I became dimly aware that I was standing alone under the bright lights, crying.  The referee was holding up the other boy’s arm.  He had won.  I was a loser twice over, for losing the fight, and for crying.  I had failed the test.

I cried and cried, I could not stop.  Someone wiped my nose on a white towel and it came away red.  I staggered back out of the ring and started the endless walk back down the darkened aisle, my head hanging, sniffing and sobbing.  My Dad was not around – part of me was glad; part of my soul silently cried out for him.  I wanted to run, to hide; to hide from my Dad, to hide from my shame.

Energy and the High Price We Pay