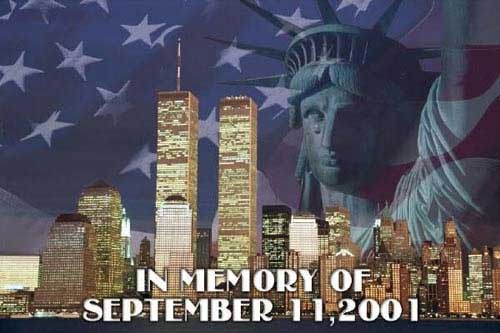 8:46 am
I am standing beneath a dusty sky
The world has suddenly taken a strange twist
Somewhere the inconceivable refuses to die
In Avalon, Arthur stirs uneasily in the mist.

9:03 am
I am standing still but my legs begin to buckle and fold
The cold realization of all that has been unseen
All the doom of Revelations that have been foretold
My heart palpitates, palms sweat, I touch the Television screen.

9:37 am
“Give me your tired, your poor…” I will make them proud again
“Your huddled masses…” I will teach them of happiness a measure
“Yearning to be free…” I will be the balsam for their pain
“The wretched refuse…” I will embrace and I will treasure.

9:59 am
My heart is penetrated by shards of steel
I cannot breathe, you have stolen my oxygen from me
My soul is like a Firefighter’s lungs
I am on my knees, begging for the nightmare to drown in the sea.

10:03 am
Though I do not know it yet, I have more strength than anyone thought
I am not a weakling pushover, I am a revolutionary Amazon
This is my land, my hope, my dream, for which I have fought
And it is I who will bring to the world a new dawn.

10:28 am
But the darkness is so overwhelming I am now blind
My chest caved in, my body crushed by blocks of concrete
Of all the unfinished things we have left behind
It is the unsaid goodbyes I will mourn the most, that is true defeat.