Abraham “Bram” Stoker wrote Dracula in 1897, but it still gave me the creeps – amazingly. It shows that the principles of writing horror are as timeless as Dracula himself. I’ll share with you some things that I’ve noted and expanded some points too. If you haven’t read it, check it out here.

1. Throw in the extraordinary suddenly.
Make things appear to be normal then throw in the weird stuff. Dracula seems to be quite a nice guy at first but on occasion gets high when he sees blood. Or can’t be seen in mirrors. Then there are some sexy vampire ladies (Dracula’s brides, not wives since he wants to keep his options open) that surround our hero, and he really wants to kiss them but she prefers breathing down his neck, making it itchy. Freaky.
Make it seem normal but twist some facts to shock your reader. The scariest stuff is rooted in daily life. Draw from your local superstitions. The other day I was telling my friend about the movie the Book Thief (2013) that it was about a book with teeth (thief) that would bite off the reader’s face! Sorry, bad joke. Let’s move on. 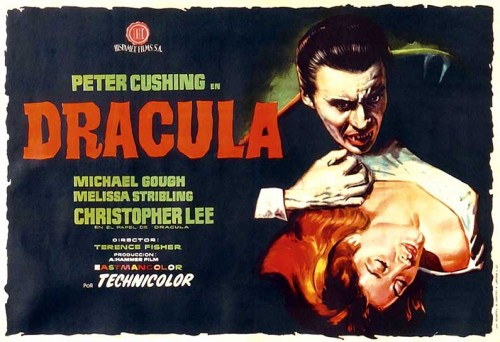 2. Show character’s reactions and thoughts
You must mention the character’s thoughts and reactions so readers feel it too. Tension is highest when you’re anticipating the horror. When the door creaks open. When the lights go out. When you see blood along the corridor. Expand those moments as if time has stood still. Then hit the readers hard with a monster or false danger.

One scene in Dracula has the hero entering the room to see Dracula with his lady friend (the hero’s friend not Dracula’s). Dracula had sliced open his own chest and made the lady feed on his blood like a cat licking from its saucer. Pretty intense, isn’t it? But don’t jump into action yet unless this is the 20th time the hero has seen this and is used to it. Expand the scene first with the hero’s reactions and thoughts. Then dive into actions.

3. Link character with keywords
When I read the story, Dracula is often gentlemen like at times and then in a split second, turns into a raving monster from hell. The characters keep on using words like death, hell, fiend, pale and monster when referring to him. I think it evokes certain imaginations in the reader of what Dracula is like. So assign some key terms to your characters and reference it again and again so it will sink it. Until the reader believes it and starts to hate and fear Dracula!

4. Use only letters, journal, clippings
Stoker conveys the story through character diaries, newspaper clippings, telegrams and letters.This is an uncommon style of writing (epistolary) that I think is absolutely creative though with its limitations.  It’s like first-person viewpoint but for multiple characters (except Dracula – if he wrote a diary, it wouldn’t be publishable content). It dials up the tension when one character knows some crucial information while another doesn’t. Problem is; some crucial events occur in between letters and then mentioned in retrospect leaving readers to infer.

In modern terms, this could translate to keeping a blog or sending email. I’ve seen an author write only using emails and poems, but I can’t remember the name. Really interesting if you’re trying a different viewpoint and want to make the events appear real.

5. Have other people hint at evil your hero is facing.
In the story, before the hero ventures to Dracula’s castle, lots of villagers are super scared for him and beg him not to go. But of course, the hero ignores it otherwise there’s no story. This will get the reader’s curiosity perked at the looming danger especially when the hero doesn’t realize what he’s getting into.

Other things to hint with include characters reading articles that explain the ancient legends of Nosferatu, blood sucking Vampire, etc. Increase the body count especially close friends too. Notice how these type of stories always starts with lots of characters to be monster fodder? For these type of stories, you need a wise guy or expert around to tell your hero more about the monster and how to defeat it. This should scare the pants off your hero unless he’s Steven Seagal. If there’s no wise guy, at least make your hero the wise guy.

6. Make your hero’s plans fail
In the story, the hero Harker is trapped in Dracula’s castle. He can’t send any word out to his fiance. Dracula is forcing him to write scripted letters. Time and time again, all his plans to escape are crushed by Dracula’s schemes. Which makes it more exciting. Don’t make it too easy for your hero so when he/she finally succeeds, your readers cheer with him/her. Usually, the magic number is 3, meaning success on the third try.

A graduate student who loves writing both in his free time and not-so-free time.