Tale One – The Preacher

A Zen monk was walking down the path to a stream when he came upon a Christian missionary preaching to a small gathering of followers.

“Join us brother in celebrating the good news” yelled the preacher.

“I will join you just as soon as I go to the stream to wash,” replied the Zen monk.

“But will the water of the stream wash off your sins?” Asked the preacher.

“Not if I join you first,” replied the Zen monk and kept on walking. 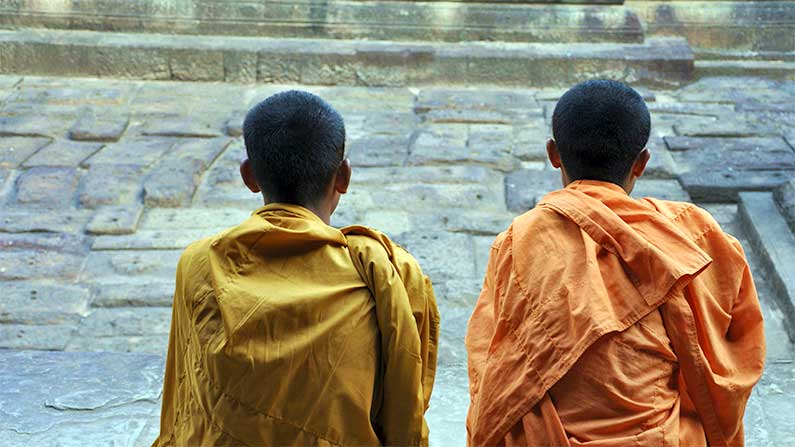 Several Zen Monks were meditating in an abandoned Buddhist temple while waiting for their Sensei to meet up with them for their daily Enlightenment lessons.

As they were deep in the transcendental state a hooded man in a brown cassock carrying a broom walked into the temple and began to sweep causing the dust to fly up and many of the monks began to cough, this in turn broke their meditation.

Angered by this action they leaped to their feet and confronted the man.

“What’s the idea of disturbing the peace here and causing such a commotion?”

At this the man in the brown cassock straightened up and revealed that he had a large wooden cross hanging on his neck.

The monks were even more indignant now.  Before the man could utter a word they seized him and sought to teach him a lesson, by force if necessary.

“You are a Christian, you desecrate our temple by your presence and you insult us by your actions.”

The man in the brown-cassock then stopped them with a single move of his broom, so that a few of them fell, demonstrating that he could defend himself if necessary.

As they lay prone on the ground and he stood over them their Sensei walked in from the road.  He had been quietly observing the scene from the side.

“Students,” he said “Meet Brother Benedict, he is a Christian Monk.”

“What’s the general idea?” Asked the students more puzzled than insulted as they now understood that this was a lesson from their master.

“Well, he will be your new teacher for the foreseeable future,” said the Sensei.

“But why?  We seek to become enlightened Buddhists!” Yelled the students.

“Is that so?  Then why did you let a sweeper disturb your peace in meditation?”

“He kicked up the dust and made noise!”

“But that is what sweeping is, a noisy dusty activity.”

“But we were meditating in the temple.”

“And it never occurred to you to clean the temple before you sat down to meditate?  You were upset that he came to do your work, and then you sought to punish him for doing it.”

“But he is a Christian.”

“Yes – he certainly is, and you my former students are no Buddhist Monks.  And since you can’t be my students, maybe you can be his.”

Tale Three – The Two Monks and the Amazon

Two young Zen monks who had just taken their bows of chastity came upon a beautiful woman reclining on a meadow completely in the nude in the noon sun.  She was prone and all her wonderful female assets were not only on healthy display, they were as enticing as she could make them – it was obvious to both of them that she was a liberal Pagan woman in the mood for some carnal satisfaction.

“Shameless!” Said the first monk loudly so she could hear him and then looked for a cloak or cape to cover the offending sight.

“Beautiful,” said the second monk quietly and turned his head to the side averting his gaze but stood in such a way so he could still see her with the corner of his eye while getting ready to leave.

The woman propped herself up on an elbow and looked at them both, she then laughed and replied:

“One of you is drunk on your own guilt and the other on your own sorrow. I do not fear the man who recognizes beauty – for he knows what he has forsaken and accepts the price. But I worry about the man who would cover me up – for he has not mastered himself. He fears temptation.”

Just then the wind blew strongly and both men fell to the ground; as they did so… they were disrobed by the gust and revealed to be naked underneath (as monks tend to be) and also quite physically aroused. The woman leaped like an agile deer and stood over them naked like a predatory Amazon warrior.

“I could easily take both of you…” she said, and she extended her hands to their sex while squatting between them.

Just then the first monk’s arousal passed and he turned bright red, and then hastily covering himself up he exclaimed:  “No! Do not touch me, for I have taken a vow of chastity!”

While the second monk did not move and his arousal grew even more pronounced and he just lay there prone looking up into the sky with eyes wide open.

The Amazon woman stood up without touching either of them, and laughed again, and then said:

“One of you is drunk on your own fear the other on your own power.  But know this, neither of you can satisfy me, for I seek pleasure in abandonment not domination in seduction.”  With these words she turned on her heel and left.

The first monk was distraught and immediately went back to his school to confess his confusion and incomprehension.  While the second monk poured rice-wine into a cup and as he drank it he curled up into a fetal position and cried.