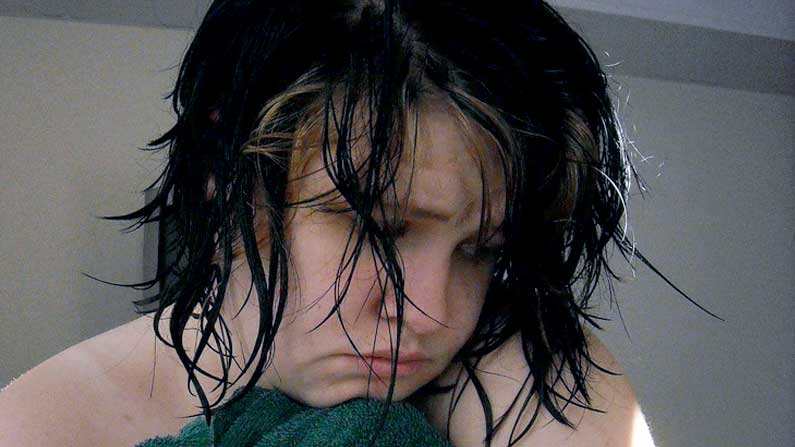 It naturally started at a young age, you know I struggled with highs and lows in my personality and so when second grade came around I had to take a pill every day. I would get called down on the loudspeaker ‘Meagan Flood to the office’ and they would have me take my pill.

When I was doing something wrong or was too hyperactive

, people would say to me ‘Did you take your medicine?’ which to this day, if somebody said that to me, I would probably snap on them.

All I ever thought I wanted and strived for, was to be ‘quote on quote’ normal. I just wanted to feel normal but what people didn’t realize is that in addition to all everybody else saw, I had my own internal problems that I couldn’t escape.

I think about killing her in her sleep because she is so fucking perfect, it destroys me. For my parents too, to think that she’s perfect and here I am just the fuck up, the devil child the one who you know, whom they wish they could have left on the side of the road and returned for a new one because I was different, I wasn’t good enough. I was unable to escape or grasp the concept of the internal feelings that my body was creating.

After I graduated high school, I lost control of myself, one hundred percent. I experienced my downward spiral, spiral to a low, I’d go have sex with this person and that person because I felt like the sex was giving me control. It was making me feel powerful in a world where I had no control. I would have hysterical fits and just cry and cry and cry and rage.

My boyfriend and I would get in physical fights, I would physically attack him. I would, I would lose control, in fact so bad that I have a couple of memories of blacking out, a physical rage that was so aggressive and just so enraged with emotion and loss of control. I came to the next day, with scratches all over him and all over his face all over his back.

I knew then that I needed help. I was in an unhealthy place, in an unhealthy state of mind, and I became really suicidal. I became lost in a tornado, I call it a tornado or just the downward spiral of unhappiness that I was going through. It was really, really scary and one day I was done.

I found out some shit and I lost control and I was going to drive off a bridge… and I’m calling my mom to say goodbye and tell her that I loved her when she started hysterically crying saying, ‘I raised you for twenty years, please, please don’t leave me…I’ll come and get you and I’ll be making everything better, we will fix everything, don’t take twenty years away from me. You know I can’t live without you.

So, you know, that’s obviously what saved my life (starts to tear up and voice is shaky) (silence for 5 seconds) because when you get to the point where you don’t think you can fight through it anymore, it’s really scary and the only thing you want is your mom to tell you that she’s going to make everything better. That day that changed my life… it really, really was the day that changed my life. If it wouldn’t have happened just like that, I would have never been able to be where I am today.

When I was first diagnosed bipolar, I took one of those, you know, questionnaires – like if you have five traits out of the ten, you are a bipolar WOOHOO! Um, that’s when I was legitimately diagnosed as bipolar which a gives me a little more clarity…

So ah, I was started on the drugs, got to love the drugs, that’s when I gained forty pounds in two months, you thought I was depressed before… well, FUCK you just made me fat and depressed. When you are in this depressed state, it becomes a very, very scary thing.

You have heavy drugs on you at all times, you can easily say ‘fuck it, I quit. I just want to be normal. I’m never going to be normal, nothing is going to make me normal, let me pop a bunch of these pills and just be done with it.’

And I’m fed up at this point because I think nothing is going to help me. Until the day I sat in Tom’s office… that was the day that changed my life… for the better… my mom was the one who saved it and Tom’s the one who changed it because if I wouldn’t have embraced that therapy, which I continued every week for five years.

I would not be here where I am today, I would not… and I paid 160 dollars a week to see my therapist! I mowed the lawn… or cleaned up dog poop because I knew that it was what I had to do to pay for my therapy… to pay for my investment in my life.

Something that was going to change my life, was going to help me to be successful and to be functioning and to not be where I was.

Now I’ve been off meds for almost six years… okay… going on six years here… as a functioning bipolar… because Tom gave me the tools and techniques to be a successful person, to be Meagan… with bipolar….

Instead, I could say, what you said really hurt my feelings, it made me feel inferior and angry and sad… and alone… and hurt me and I just I really don’t like, I really don’t like when you say that to me …. Let me tell you something… for a bipolar, that’s probably more effective than you could possibly get because my whole life was a reaction. I became a reactive time bomb, I would trip out on you… explode.

And it really is one of the biggest struggles I think with bipolar. There is no Band-Aid that is ever going to cover up me being bipolar, there is no medication in the world that is ever going to make me not bipolar, I am and I will live as a bipolar the rest of my life, until the day I have finally worked through my life enough and learned to be the best bipolar I can ever be.

I might not be president of the United States… or work as a C.E.O. or even work at a job that’s, really, you know, pays more than 12 dollars an hour! But I’m a successful bipolar and if you knew how long I’ve been struggling, it’s the one job that I’ve accomplished and it takes work every day.

Their first mistake was every letting me know that I was different….in second grade I should have never been told that I was diagnosed with ADHD and ADD. It never should have been on my report card.

Meagan talks out loud and Meagan distracts other people in class… it should have said ‘Meagan’s skill is to communicate. She should probably major and continue in speech classes and communication classes where she will thrive and become successful, but ultimately was put negativity in me, on me, from the very beginning.

That’s the one mistake we make with mental illness…it’s not negative to be high and low… because everybody has highs and lows… ours are just a little more often and a little bit closer together… nobody thought how powerful I could be because I motivate people and change people’s lives.

I get to change people with my story and my life experiences… that’s what makes me bipolar that’s how we should say people are bipolar… in a positive way… in a positive connotation… making them special and important and amazing because that’s what we are… Because I don’t know how many of you have met a bipolar but you will never forget them… nobody will ever forget me.

Angela JBryant Jan 31, 2020 0
Fantasy Writing Whether you are a beginner writer or have lots of experience in the field, coming up with an…
Psychology