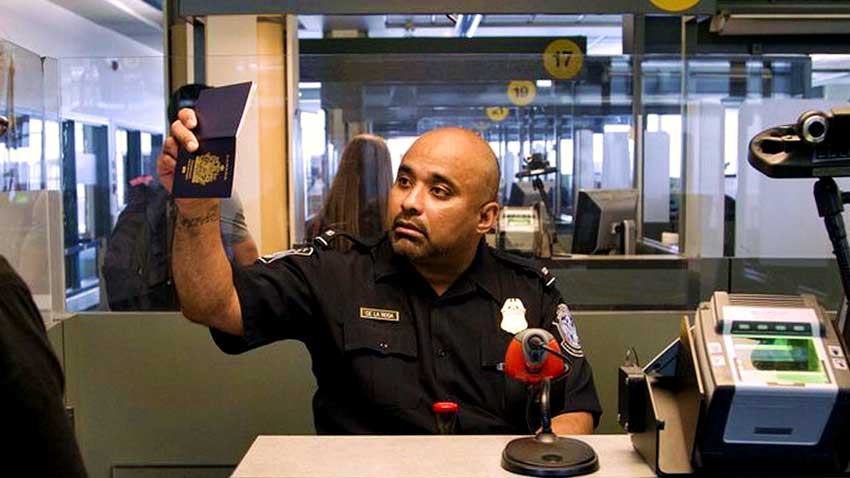 The Immigration Officer: Mr. My Yo Yo graduated near the top of his class from Pyonghyun University in the center of Hong Kong.

His major dream for his future was to enter the United States to become the wealthy owner of a company.

Before he left his home in Hong Kong, he had obtained a U.S. visa and had carried the proper certificates and vital documents.  The immigration authorities in San Francisco noticed Mr. My approach the counter.  He was conspicuous.  They couldn’t help notice how the enormous burden of baggage bent the immigrant’s back, nearly to the breaking point.

Mr. My set his mountainous baggage down and presented his passport, the visa, health records, education certificates, and financial statements to the inspector.

“Do you speak English?” the man in uniform asked.  “Yes, but rather poorly,” Mr. My whispered.

“Where in the U.S. will you be living?” the officer asked.  Mr. My became nervous.  He worried that these questions would quickly become difficult.  Sweat beaded his forehead.  He felt hot.  “I will live in Hong Kong,” he sputtered.  The officer scribbled a few notes on his tablet, then continued the examination.

“When were you born?”  The question stunned Mr. My like a bullet from a rifle. “In 1968, in July,” he responded weakly. The smartly dressed officer’s yellow pencil scratched the paper again.  “And since when do you plan to live in America?” the officer asked.  “Since I was in high school – maybe even when I was in elementary school,” the quivering voice, now merely half a whisper, responded.

The timid, uncertain responses gave the tall American more force.  His thumb flew to his mouth as he wet his page-turning finger, then flipped the paper to the next page.  He immediately prepared to pounce on the immigrant like a cat on a rodent.  He inhaled deeply, straightened his back like an I-beam, and opened his mouth to deliver the next injury.

Suddenly a breath of compassion fell upon the impeccable officer.  He saw Mr. My’s thin arms, the threads on his sleeves, and his frayed collar.  He had seen the boxes and bags of luggage piled on the floor.  The whole panorama tugged at the conscience of the man asking the questions and taking notes.

At that moment, he said to the traveler, “You must be very weary.  Please come over here and rest a moment.”  Then the officer sank into deep thought and profound reflection.  He remembered some mistreatment he had received at the hand of older, bigger boys.  He re-lived momentarily, the anger and his feeling of helplessness.  He thought of his wanting to cry, to shout, to call for help.  Thank God, these memories stirred a feeling of kinship for the man who newly arrived from Hong Kong.

“We’ll have your papers ready in just a little while.”

Family
• Married Marilyn Ruth Slemmer on August 18, 1968
• Two adopted sons Timothy Sven born 9/27/74 and Mathew Aaron born 2/28/80
• Raised with four brothers and one sister in Kirkland, Washington. Three of the brothers and I are twins.

Travel
• First trip abroad 1965 to meet brother in Athens on his discharge from the Peace Corps
• Visited Scandinavian relatives in Sweden and Norway 1965
• Taught in Philippines, Clark Air Force Base 1965 – 1967
• Taught in Japan at Chiba Christian Junior College with the Church of the Nazarene 1985
• Field research of honey production methods in Hong Kong, Japan, Okinawa

Writing
• Published in Field & Stream a story of a hunter who encountered a swarm of honeybees in the woods
• Published in Gleanings in Bee Culture several articles involving techniques, experiences, interviews of foreign beekeepers
• Published in a variety of educational journals
• Published four books on Self-Publishing system