In the hypnotic hum, Byron’s anticipation of finding a tectonic crack surged with renewed imagination. His face lit up, glad he had managed to get over his claustrophobic feeling. “Is this where the Hornets and sub disappeared?”

Byron sighed. A mission to find sea creatures would be senseless in an environment of bone-crushing pressure. He would be checking for tectonic plates, seamount eruptions, or any evidence of seismic cracks.

The dive continued. When darkness overwhelmed the surroundings, Kiichi increased power to the two strobes. 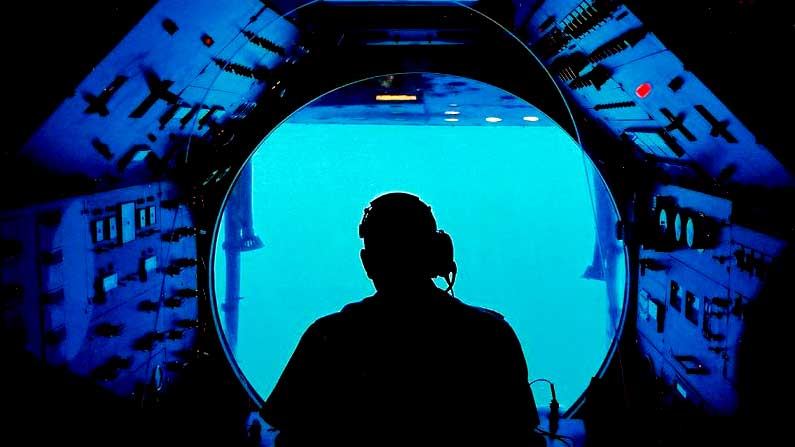 WITH THE CABIN DIMMED, Eileen looked over the Professor’s shoulders as he pulled the antenna from his EQ-Lun. Flashes of lights revealed Keiko’s southeasterly progress. The flickering screen mesmerized her. He tapped a few commands, and as the topography of a haunted seascape appeared, every crewmember gathered around for a better view.

“We’re on top of the Nansei-Shoto chain of hills, parallel to the Izu-Ogasawara Trench.” Wulfstein pointed at the screen. “And this is the Ma-no Umi, the Dragon Triangle.”

Her eyes widened as the laptop beeped in distinct intervals and tones, all of which the Professor seemed to recognize. By clicking a key, Wulfstein highlighted a part of the map. By clicking on others, he produced more fuzzy contours. His fingers moved with the agility of an insect’s feelers. “If an earthquake occurs in the western Pacific,” he said, “you’ll see it here first.”

“We have direct links to all observation spots via a satellite navigation system. We can locate a sensor to within an inch.”

“I thought the GPS system wouldn’t work in the ocean.”

“GPS can’t work underwater,” Wulfstein said. “But I’m using the Běidǒu iSat system. It taps into the space navigation from Chinese satellites, then incorporates the more than 3500 electronic sensors that the Japanese had installed—some on the surface, others deep into the sea. They’ve overcome the GPS limitation.”

Eileen nodded. Against the subdued light, the Professor’s sharp face and aquiline nose reminded her of Jerry. She forced her thoughts to her operation, suppressing her pain. “If it’s only an issue of earth science, why were the Hornets involved?”

“Good question,” Wulfstein said. “That’s why our mission is to find the missing pieces in this puzzle.”

He clicked on the computer screen again. It showed the sub’s position. With the touch of a key, the whole archipelago appeared. Every tiny dot represented a seismic jolt.

“If you do, it may be too late.” He manipulated the screen. It showed a simulated velocity seismograph. He moved the cursor, and a mixture of lines and arrows appeared. Red dots marked volcanic fires spurting from the ocean floor.

Eileen marveled at EQ-Lun’s versatility.Heat, currents, gravitational abnormalities, vertical and horizontal movements of the earth’s crust, volcanic activities—these and every other set of data around the Pacific could be generated. Any quake would activate a seismometer and trigger a warning to distant receivers, giving notice before the onset of destruction.

“It’s the most advanced program I’ve ever seen,” Yoshino said.

“Actually, this is far from being satisfactory,” Wulfstein said. “It’s no use if an instrument can only detect an event after it strikes. We need to be forewarned.”

“My research prognosis involves the study of changes in animal behavior, water levels, underground rumbles, composition of gases and other subtle signs.”

“But changes to animal behavior are too unpredictable,” Byron said. “And it’s prone to errors.”

“It’s the interpretations that are prone to errors. Surely they’re varied: some offer warning days in advance, others within hours. But who’s to say a barking dog or a lost bird at sea isn’t as much an indicator as a needle scribbling wildly on a seismometer?”

WEIRD, BYRON THOUGHT. How can the old man be so naïve? A flock of birds in fright might signal danger, but how could one decide, based on its flight pattern, that a quake of a certain magnitude was on its way? Byron shook his head. How would the behavior differ from one of a magnitude of 7.5 on the Richter scale to, say, 9.1? Or where would the epicenter be?

The descent continued. Compressed in a lulling hum and bathed in electric light, Keiko persevered. A scattering of marine snow, tiny gray particles of dead organisms and waste filtered through the murky water. As Byron looked out the porthole, he felt more and more uncomfortable.

Soon, the cramped atmosphere of the sub resembled a coffin being dragged through a blizzard.

“I feel nauseous,” Byron said, massaging his temples to clear his head.

“It seems fine,” the pilot said, but rechecked his console and turned a dial. “Okay—done.”

Slow breathing helped Byron to recover. After wiping beads of sweat from his brow, he noted that living things become less frequent. Soon, in the absence of further sightings, his thought went back to the futility of animal watching. The fish disappearing might be a start, but how could one predict a quake based on the howling of a dog in the middle of the night, or convincing the public when a call came for an evacuation. This data couldn’t be observed scientifically. Shaking his head, he returned to his seat. It can’t be anything other than hard science. It must be the diving tectonic plates.

A PING SOUNDED and Eileen sprang to her feet, feeling a sliver of disturbance somewhere. Vague lines of scattered contours appeared at a distance. Kiichi maneuvered Keiko slowly, scanning with its sonar. After a few minutes, another solid echo sounded. Lights played over massive forms. Kiichi turned on two more beams, one at each side, brightening a wider area.

“We’re at the top of a seamount,” Eileen said.

Kiichi nodded. “This chain runs parallel to the Japanese coastline.”

“Somewhere, there have to be cracks,” Byron said. “This is the result of subducting plates.”

Keiko dived through the snowdrift of luminous sediment. The drift thinned as the sub remained eastward bound, traversing sharp bends.

Wulfstein kept up with data collection, readings the compass, chronometer, manometer, and thermometer. He checked his records regularly against the sub’s.

Her pulse quickened, but Eileen steadied herself. Odd. Are we here just to see this abyss? Then white and gray sands floated into view. Ahead, two mustard-colored circles loomed.

Soon the gloom gave way to a distinct outline. Equipped with electro-receptors, Keiko could detect minute electrical currents produced by the muscles of a camouflaged creature. Disturbed, a giant flounder the width of Keiko swam off.

The sub passed over barren seascape, dotted with purple sea anemones. After another twenty yards, the smoky water shimmered like air rising from a chimney.

“Damn.” Eileen backed away from the glass as though hot rays had pierced her skin. “We’re going to be killed.”

“Over 100º Centigrade outside,” Wulfstein said.

“Back off, quick!” Yoshino grabbed the skipper’s shoulder. “We’re getting too close.”

Kiichi reversed. The beams showed a roiling plume of smoke rising to merge with the background of black water. An occasional spurt of red-orange bubbles sprayed forth as if the belly of the earth belched molten rock. Springing from cracks in the lava, shimmering waters turned a dirty blue where minerals precipitated and stained rocks. Hundreds of huge, ash-white eyeless shrimps tumbled and zigzagged at random.

“No, they’re dying,” Wulfstein said. “They’re being carried away by the hot spring.”

Looming ahead, a myriad of clams and mussels appeared, packed in dense clumps close to hydrothermal vents. Clusters of three-meter-long bioluminescent red tubeworms lurked close by. White crabs and squat lobsters, along with shrimps and purple octopi, came into view. As a crab used its giant claws to poke marine life into its mouth, it stopped and froze.

“Look! One got poached.” Eileen pointed at a crab swept away by the current as Keiko edged forward into an incredible display of billowing black clouds. Behind the smoke-spitting stalagmites, a community of creatures had all turned white. “Look! These are cooked.”

“This is a dangerous place.” The skipper steered the sub away from the heated geyser. Some ten yards away, he maneuvered Keiko’s two robotic arms to collect rock samples and deposit them into a mesh basket.

Eileen noted that Wulfstein had recorded each creature seen and distance covered, in fact, every details of the voyage. This meticulous endeavor suits him; to venture into such an unknown territory poses him a satisfying challenge.

“We’re over a faultline,” Wulfstein said.

“That’s what I expected,” Byron said, pointing. “The hot springs come from the new cracks.”

“Where are we exactly?” Eileen’s heart thundered in her ears.

“We are now traveling along the Izu-Ogasawara Trench,” Wulfstein said.

Teetering precariously, a fragile balcony appeared to perch over a dark void. Fresh-looking boulders hovered on flimsy bases, some leaning at angles defying gravity. Eileen tilted forward as Keiko moved on a sharp descent into a murky valley.

A column of a cliff fell, releasing sediment as the rock reached the bottom. A newly-formed fault wall, standing twenty to thirty yards high, appeared. Keiko trembled but continued trailing the faultline. The route curved to a great height and formed the base for a gigantic cliff, then plunged downward. More columns appeared, crossing walls with their sharp spurs, looking like capes and promontories.

A whirlpool of scattering debris, mud and dust eventually cleared. Eileen plastered her face against the porthole again. The unfolding terrain resembled a geological accident in the shadow-cast glare from the beams. Some primordial force had gouged great chunks out of a vertical canyon.

Yoshino pressed against the glass as the sonar pinged. “This must be from the recent seaquake.”

“The edges are pointed,” Eileen said. “We had a seaquake two months ago.”

Dark objects flashed on the video. Ten yards away, at the edge of what seemed an immobile mass, the camera scanned something familiar: a piece of rubble.

Kiichi banked the sub forward and some corroded rods appeared on site. A rotten guardrail. Eileen prickled with cold sweat. For the first time in many hours, they had found something!

Eileen blinked. Is that a wreck?