Although my first book in the series-Pat Canella (the dockland murders) is not making many waves on the sales front, I had already decided to do a follow-up story, mainly because there was such a groundswell of interest in my work both in Facebook & Bookrix.com, with friends asking when I was doing the next episode.

This story starts with Patti returning from enforced leave, walking to her apartment she gets the feeling she is being followed. What transpires is a mix of stealth and gun fire, as she eludes her captor and sets in motion events that will be featured in the next book “Hunted down.” 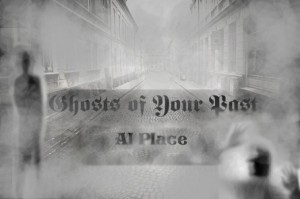 Here is a teaser for “Ghosts.

“Back early from my enforced leave of absence, I was at a dead end. The Sarge had told me to take time off to get over the incident which had led to the death of my former partner, Adrian Chart. Much as I hated to go back to that dingy apartment, an order was an order.
“See you tomorrow then, Sarge,” I called as I left the squad room.
“No, you still have three days left, Patti, and you have to take them. Lieutenant’s orders.”
“Shoot! You saw my apartment. You might as well send me to jail.”
“Orders are orders, Patti. And I agree and sympathise with you. I will tell you about it when you come back.”
“OK. I s’pose if I have to I have to, but I am gonna be chewing the wallpaper by tonight – if I can find some,” I moaned at the thought of spending any time in that dungeon of an apartment.

With a heavy heart I walked out of the room. “Shoot. Three days stuck in that rat hole!”
As I walked down the road I thought I caught sight of a ghostly shape in the shadows following me, but as I was tired I paid no attention to it.
Darkness was crawling along the sidewalk, and shops were boarding up for the night as I turned off Jackson Avenue. I headed towards my apartment block on Sixth and Harrison. With each closed shop and dark alleyway, I had the feeling of being watched from afar.

This was more than a little creepy, as I knew this part of town was so neglected that even drunks avoided it. So who was following me? And why?

Reading Gone with the Wind