After her sister, Dryad haunts her from beyond the grave for three long and torturous years, Sarabande undertakes a dangerous journey into the past to either raise her cruel sister from the dead, ending the torment, or to take her place in the safe darkness of the earth.

Sarabande leaves the mountains of Montana for the cornfields of Illinois on a black horse to seek help from Robert Adams, the once powerful Sun Singer, in spite of Gem’s prophecy of shame. One man tries to kill her alongside a deserted prairie road, one tries to save her with ancient wisdom, and Robert tries to send her away. 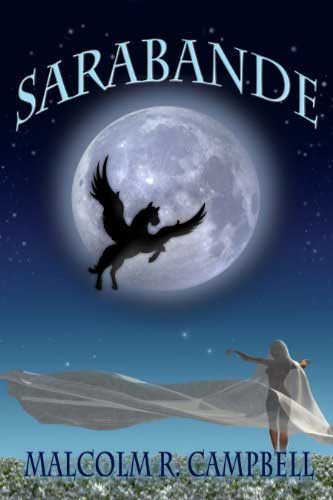 Even if she persuades Robert to bring the remnants of his magic to Dryad’s shallow grave, the desperate man who follows them desires the Rowan staff for ill intent… and the malicious sister who awaits their arrival desires much more than a mere return to life. While this fantasy adventure is a sequel to “The Sun Singer,” it can be read as a stand-alone novel. The e-book is available on Kindle, with the publication of the paperback edition expected August 31.

Excerpt:
Gem pulled her hands away and stood up so quickly she knocked over her spinning wheel. She didn’t appear to notice. She walked to the window and leaned out as though making sure no one else would hear her words.

“I was shamed by the king.” Gem pulled up her left sleeve to reveal the letters SJ in a bold pink scar that contrasted with her walnut-colored skin.

“I bore Justine’s mark as well as his child. Both were conceived in pain in a dark cell covered with urine and rat droppings.” Sarabande went to her, but Gem rolled down the sleeve, covering the ugly mark that signified Sovereign Justine. “No, my friend, I cannot abide you’re seeing it close at hand. My daughter, though, this doting mother will speak of her at great length if allowed to do so.”

“Cinnabar has shown me her brand,” said Sarabande.

“Discretion is a lesson I was never able to teach her. But listen: on your journey to Osprey’s house, you won’t walk through the domains of kings.”

Sarabande gasped and sat down, suddenly lightheaded when she understood why Gem showed her the scar.

“If there are no kings, what dangers have you seen?”

Gem put her hands on Sarabande’s shoulders and kneaded out the growing knots. Her touch always felt like a touch of power, and she wondered if she shared Osprey’s way with healing magic.

“I have seen a dark creek beneath a bridge on a foggy night. I have heard screams and howls outside my comprehension. I don’t understand it,” said Gem, holding their eye contact as though she understood more than she would say. “Sarabande, you know without my lecturing at great length about the ways of the world. A woman on a lonely road can be a target. Travel with a sharp knife.”

The impromptu massage felt good. The unclear warning did not. Vague predictions were worse than silence. They stirred up what did not need to be stirred up.

“Yes, I know that, Gem. I will carry a knife and take care to have it handy.”

“With due care, you can avoid your fate, but destiny is the way you’ve already written your life’s story.”

“I wanted to walk the sixteen hundred and fifty miles to Osprey’s house long before it occurred to me I would ever do so. If there is to be shame in it, then I will live or die with whatever I find on that lonely road.”

Malcolm R. Campbell is the author of three fantasy novels with primary scenes set in Glacier National Park, Montana. His passion for the Montana high country began when he worked as a bellman for one of the park’s hotels during the summer while in college. He hiked many of the trails, climbed some of the mountains, rode horses into the high country and became thoroughly addicted to the “shining mountains.”

In addition to “Sarabande,” “The Sun Singer,” and “Garden of Heaven: an Odyssey,” he is the author of a non-fiction e-book about the park’s Swiftcurrent Valley, “Bears: Where They Fought.” He lives in Jackson County, Georgia, with his wife Lesa and four feisty cats.