I come round, gasping for air. It’s like I’ve been unconscious. I can’t tell for how long.

There’s a gun tip under my chin. I’m being held up by the collar. And it’s hot, this gun tip, really hot, like burning, scalding. This will leave a blister, probably a permanent scar, in the flesh under my chin. Will my beard even grow back over it? That’s what I’m thinking. That’s the thought that’s occupying my mind, while my back is against the cold steel wall of the elevator. I’m being roughed up, violently roused from some stunned place. I move my eyes. See Adams. 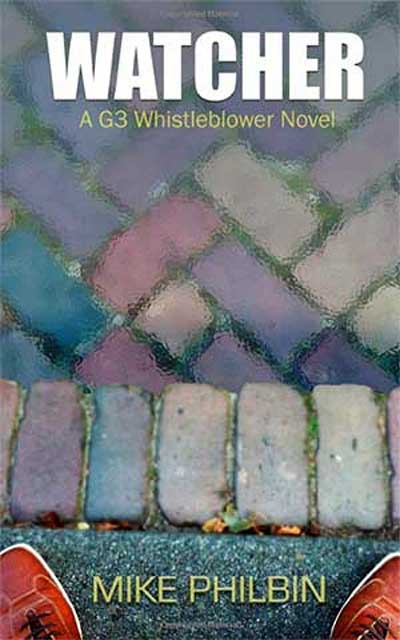 Who is this guy?
Why are we here?
Why am I alive?
“You’re my hostage, officially. My security out of here,” he informs me, like I care.
“You’re a fucking idiot, Adams. You know this, right?” I just don’t give a shit. This guy’s a waste of space, clearly not a true G3. Or maybe the organisation’s really gone to the dogs since I’ve been out of the loop for the last seven years. One can only hope the whole G3-shebang hasn’t’ gone to shit in my absence. I’d love to fuck up his game. That would give me ultimate satisfaction right now.
“Don’t do anything stupid, Atchum.” Adams senses my fight or flight trigger priming. The elevator pings for Ground Floor. The corporate logo-etched steel elevator doors start to open.
“What, you mean like professionally associate myself with a trigger-happy moron like you? Perish the thought,” I counter, pacing my question so that it coincides with the full opening of the doors.

He turns on me and tries to shove the still-warm barrel of his mini-uzi into my left nostril. Pulls a feral snarling face. Eyes aflame. Stares at me, with such ferocity, his head is actually trembling with rage. The vein above his left eye  pulses frantically. He’s dying to kill me. Then he snaps out of it, stows the gun away.

“Hapless old schoolers,” he laughs. Dusts down his business suit with both his hands. Readies himself for the smooth exit out of the Vector Triumphant building. He’s clearly under strict orders then, Don’t harm Atchum. He really wants to kill me, so something’s holding him back.

I touch the side of my wristwatch and instinctively roll back a little toothed barrel on the side of it.
I don’t know why I do this, but it’s as natural as taking the next breath. It’s time I reviewed how I got to this part of my story. I don’t even have to think about doing this, before I realise what’s happened. It’s done. I’m back in the boardroom meeting, there are fourteen others around the table. I’m at the ‘foot’ of it, next to Malcolm; down wind, at the periphery, on the south-western outskirts of oaken territory as it were. Barely in the firing line of the Admiral’s wrath. I guess I’m still working my way up the company ladder. But I must have ‘some skill’ to be called into such a lofty gathering.

All the bosses are here… and none of them are smiling.
Adams comes in.
The Admiral looks up grumpily from his far end of the table.
“How dare one,” he mumbles through his handlebar moustache.
Kemp, the Head of Marketing from floor eleven, orders Adams to, “Get out, you’re not cleared for this meeting.”

Movement at the far end of the table.
Adams squeezes the trigger.
I flinch as Adams’ silenced mini-Uzi 9mm explodes into life, though there’s minimal sound. Just a dull vibration in the back of my teeth as all fourteen bullets find their targets.
I’ve witnessed none of it, my eyes are screwed tight shut.

When I open my eyes, Adams is leering across the table at me. All around bodies are dead, several are still twitching. Count them. I count them. All present and correct, sir. All accounted for by this Grim Reaper, this Adams fellow, this crack-shot contract killer.

Adams releases the trigger and points the gun at me. He depresses the trigger one more time and the silenced mini-Uzi clicks once, as the arming pin slides across the top of an empty magazine. Nudging no final bullet into the firing chamber.

Who the fuck has a 14-round clip?
“You prick!” I snarl at him.
He laughs on one side of his mouth. Says, “Collect your shit, Atchum. We are gone.”
And it all becomes clear why I survived.
Wait a minute.

Rewind.
Roll back.
I keep my eyes open this time. Turn all my senses back on, full resolution; no compression due to fear for my life.
Adams comes through the door again in super-slo-mo like he’s advertising some body lotion, that sway to his head. His hair flowing in the wind. He doesn’t even knock. He might have incurred a less aggressive reaction from the board, had he just taken the time to think of the polite entry. Might have gained some upper hand somehow, though to be honest he didn’t seem to need any help at all killing those people. Adams didn’t fuck around, he just stormed in like a political protester ready to shout down the Power Brokers. Every fold of cloth rendered in wonderful iMax detail. Every lock of swaying hair a perfect simulation. Every tiny twitch of his facial muscles. The sub-cutaneous sway of flab under flesh. I could even tell that his inner ear was pulsing like someone had poured a tarantula out of a jar onto his exposed chest. I’m telling you, you don’t get this kind of quality from normal TV assassinations. This is a quality slaughter. He’s probably recording it, too. They call it The Money Shot.

Adams looks far less relaxed this time round than he did the first time he came in, when his demeanour was masked by social panic. This time round, it’s possible to see a lot of what’s going on under the hood, shall we say. He’s tense as. Probably drug enhanced. Potentially a remote-controlled drone while the killing’s being done.

“Noooooooooooooot nooooooooooow, Aaaaaaadaaaaaaaaammmmmmmms.” says Kemp in time-abridged fashion. Brandt, the super tall German from R&D on floor ten, the intensely texting guy I’d shared the elevator ride with about ten minutes ago, accepts the gauntlet and makes to get out of his chair to evict the intruder. As part of R&D, it’s Brandt’s duty to make sure ‘things are made to happen’ in this company so it’s no surprise he gung-hos to the front of the queue to kick Adams out. Rumour in the office is him and Adams have some sort of ‘ history’ so there’s no love lost when Brandt finally gets the chance to strong-arm some cunt like him. He doesn’t even make his way to a standing position. No matter how tall he is.

Adams’ silenced mini-Uzi goes off as his left arm seems to swing out in an idle arc like a lazy tennis backhand. I notice that the Uzi’s set to full auto. The arming pin on the side of the Uzi blazes back and forth, barely visible even at this slowed down frame rate. Putt putt putt putt… fourteen bullets leave the muzzle. Count them. One, two, three, four… when you reach fourteen, you’ve killed everyone in this room with a head shot. A fucking head shot. This is a physical impossibility.
Now, slow it right down and look again.

The Admiral is the last to go down, so let’s start with him. His eyes remain long-focussed. He’s just angry some upstart, some oik, has trespassed on his private business arena uninvited. He doesn’t care that his whole cabinet’s being assassinated. He just has a sense of ‘personal affront’ about him. High horsed-ness, “Inveterate blackguard,” you could imagine him inflating his moustache. What what what….

The 9mm slug burrows into his forehead, with a clockwise screwing action. It’s like the skin pulls away from the bullet in topological revulsion, turning the wrinkled liver-spotted brow to a localised fleshy broth. Just above the right eyebrow. In fact, a renegade eyebrow hair evaporates as this insanely kinetic projectile pours through it. Then the bone of his frontal skull plate accepts its pulverised fate. The bullet compresses a little like a spring but continues to corkscrew through the bone into the Admiral’s brain.

All this time, the Admiral is still in the process of denouncing ‘this young whipper-snapper’ from the comfort of his leather throne. He still thinks he exists, at this moment. Like all’s going to be well and his reign at Vector Triumphant will continue on until they kidney-dialysis him into retirement or something. Mothball him. Meanwhile, behind him, his skull is opening up and a lurid red peacock of brains and blood and bone are fanning out. Ballistic arcing. Life ending.

Now, look at Adams again. He’s saying something as he’s shooting. Is he praying? Reciting some mantra? Is he in full control of his actions? It’s so hard to decide.
The gun points directly at me. Adams has released his full-auto finger and reapplies the pressure. It clicks once. Arming pin makes that metallic hissing sound as it drags across an emptied clip. His lips are still moving. Is he praying? Thanking his Maker? Is he communicating with a Superior? Is he taking direct orders, mouthing the words in his concealed coms device?

Look again, look closer at his lips. Zoom right in. They’re definitely reciting something. Watch how they move. Can’t make out what he’s saying.

Back in natural time, the assassinations have just happened. Smell of cordite. Nobody outside this meeting room is aware of what’s happened up here yet. An unabashed grin of a job well done crawls onto Adams’ face, “You’re coming with me, Atchum.” he orders me to get up off the floor, where I’d taken cover, and follow him. Doesn’t wait for me to collect my things. Assumes I’ll follow. How could I not?
Have you noticed?

Did you notice how the dialogue changed between re-runs? How what was said by the characters in the scenes altered, not alterd. Altered. What does that mean? I’ll stow that thought for later, assuming I survive the next few minutes.

Adams is already at the elevator door, he’s pressed the button, and the cabin is on its way down to our (third) floor. The nameless receptionist is dead, too. Bullet through the face. Adams is calmly unscrewing the silencer from his Uzi and placing in an inside pocket. He doesn’t put the gun away, though. There’s no one in the lift when the doors open, lucky for them.