See Something Scary? Look for Helpers!

I agree with Mr. Rodgers who once said to a child many years ago, “Whenever you see something scary, look for the helpers. There are always helpers.” Like President Obama recently said after the killings at Sandy Hook, “We have been through this too many times…We’re going to have to come together and take meaningful action to prevent more tragedies like this, regardless of the politics.” 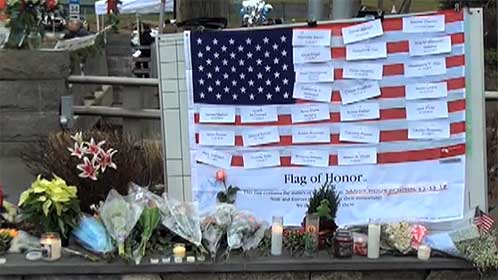 Maybe, he should have said the gun shows should be required to do background checks and not make hand-to-hand purchasing of weapons.

So what if the buyer has no mental illness? What about his family or others in their household…maybe all those that come into their homes should be background checked. Maybe, we should require everyone in the house to be physically and mentally fit enough to handle guns responsibly.

Maybe, the person buying the gun and passing the background check should be required to sign a waiver saying they will be responsible for any deaths or injuries their guns cause regardless of who the shooter is…even if that means going to jail or receiving the death penalty for making their guns available for the crimes of others.

I feel like taking responsibility for their guns will finally lessen the desire to have them. Will the 28 killed at Sandy Hook finally change the political calculus in Washington against tougher gun control laws?

Regardless of the politics of gun control, small changes are easier to stick with than the big ones. A petition to the White House demanding stricter gun control laws crossed the 25,000 signature barrier for an official White House response after fewer than seven hours online Friday. The petition was created shortly after the shooting rampage at a Newtown, Conn., elementary school that left 28 dead, including 20 children.

The petition had been signed more than 35,000 times by 8 p.m. Friday. …We the People petition asked the Obama administration to “Immediately address the issue of gun control through the introduction of legislation in Congress.” It is one of seven petitions posted to the White House site in the hours after the shootings, all of which advocate stricter gun control laws and/or improved mental health services.

The National Alliance on the Mentally Illness read, “Those who struggle both with serious mental illness and substance abuse face problems of enormous proportions. Mental health services are often not well prepared to deal with patients having both afflictions. Often only one of the two problems is identified. If both are recognized, the individual may bounce back and forth between services for mental illness and those for substance abuse, or they may be refused treatment by each of them…

It is now generally agreed that as much as 50 percent of the mentally ill population also has a substance abuse problem. The drug most commonly used is alcohol, followed by marijuana and cocaine. Prescription drugs such as tranquilizers and sleeping medicines may also be abused. The incidence of abuse is greater among males and those aged 18 to 44. People with mental illnesses may abuse drugs covertly without their families knowing it.

It is now reported that both families of mentally ill relatives and mental health professionals underestimate the amount of drug dependency among people in their care. There may be several reasons for this. It may be difficult to separate the behaviors due to mental illness from those due to drugs. There may be a degree of denial of the problem because we have had so little to offer people with combined illnesses. Caregivers might prefer not to acknowledge such a frightening problem when so little hope has been offered.”

Asperger’s is a mild form of autism often characterized by social awkwardness. While people with the disorder can become frustrated more easily, there is no evidence of a link between Asperger’s and violent behavior but this is the disease that perhaps caused the tragedy at Sandy Hook.  It is ironic the name Sandy twice brought so much pain and tragedy this year. My own family suffers from the diseases of Depression as well as chronic pain from Fibromyalgia.

We all self-medicate with prescription drugs to be productive and survive as independently as we can. However, not all of us are as lucky. My brother committed suicide after returning from Viet Nam and my son who is now 36 suffers from manic depression. When he takes his required medicines he feels so good and normal, he stops taking them. In his honeymoon phase when he is feeling good and hopeful, I am safe, happy, and hopeful.  When his manic ways return, his anger scares me.

I can very much relate to Adam’s mother Nancy trying to make life as normal as possible for her son. Lucky for us his doctor recently ordered him on a psychiatric shot once a month, and he is doing real good.  He is now working as a volunteer at a resale shop. He loves clothes and is very talented in making displays. The problem with this shot is that it costs $1,700.00 plus each  time. I wonder if the doctor is blowing up the cost to Medicare?

It has consequentially kept him out of the hospital so I can’t argue the costs saved but I feel like it is way too much for Medicare and Medicaid to handle as a serial monthly cost.

Those who suffer from any of the many antisocial diseases like Autism, Depression, and Aspergers deserve a shot at living as normally as possible so check out the following. The problem is not all those mentally ill know they are sick but those around them should.   Like Obama again repeated, Obama: ‘These Tragedies Must End, and to End Them, We Must Change. We must all take responsibility to keep those around us safe. It is important to remember that anger and noncreative passion can spill over into tragedies like Columbine and Sandy Hook.