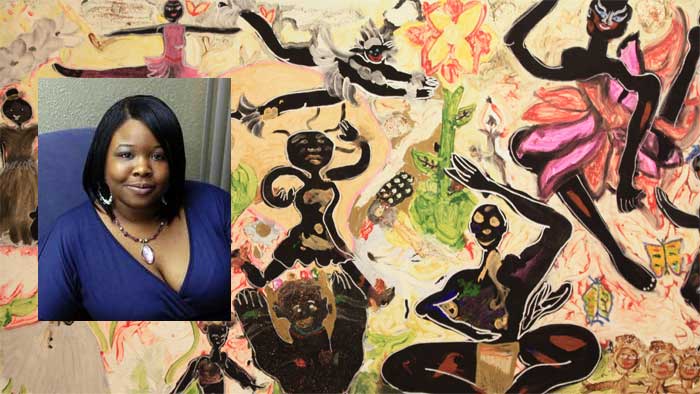 Teen mom, domestic violence victim becomes college grad and new author: Blogger and author PhatPhat was among the one in four female victims of domestic violence and rape before she turned to a new chapter in her life by helping others avoid the same looming pitfalls.

Nowadays, the Purdue University class of 2008 graduates is the solution to the problems facing today’s youth – by writing and speaking about domestic violence, rape, teen pregnancy, and building a support system.

“I’m on a mission to help as many people as I can,” says the Gary, Ind., native with nearly 6,000 views on her PhatPhat Memoirs blog. “Many teens and young people are just extremely misguided. I know I was;  from rebelling against my mom to caving into peer pressure on so many levels. In the blog, I share my story from how I entered bad relationships to being on the streets and getting pregnant at 16. It’s a matter of making good and bad decisions.”

The blog details her life trials and triumphs as a teen and young woman, which led to pregnancy and welfare before turning her life around for the better. One piece of advice she offers is to “think before you act and plan ahead.”

The raw and straightforward blog will be at the heart of her upcoming book series also titled PhatPhat memoirs. Most recently featured in the Gary Post-Tribune and a guest blogger on such websites as Girls Like Me (http://girlslikemeblog.wordpress.com/) during Teen Pregnancy Month, PhatPhat also speaks at various events targeting domestic violence and pregnancy.

PhatPhat was born and raised in Gary, Ind. At a young age, she set herself apart as a straight-A student with an attitude. She was rebellious. She had her first child at age 16, but that’s not what defines her.

She took charge of her life and went on to get her bachelor’s degree from Purdue University Calumet in Human Development and Family Studies with an emphasis on Child and Family Services. In an effort to speak to and help young women just like her, PhatPhat started a blog, PhatPhat Memoirs.

The blog reminisces of a sometimes turbulent childhood, yet relatable upbringing among her blog followers. So much so, that PhatPhat Memoirs: The series will publish its first book this fall. In addition, PhatPhat speaks out on teen pregnancy as well domestic violence and other issues that hit home for today’s youth.

To read the blog, follow PhatPhat on Twitter @PhatPhatMemoirs.
Also, PhatPhat Memoirs: The books series will be available this fall.

Tameka Washington is the talented and versatile personality behind In the Words Consulting. Tameka has managed to couple her loyalty to the written word and her loveable persona to form the communications service that boasts such Fortune 500 clients as USA Weekend magazine and America Online (AOL) along with a host of other businesses and individuals across various industries.

Her mantra:“Choose your words carefully. Use your words wisely. Make sure that the words you use are necessary and effective in getting your message across. Remember, your words are powerful."

If people just wanted a stick in the mud grammar police they could finger through the latest version of an Editing for Dummies-like book. It's Tameka's likeable nature and lively affection for the content of words, what the words say, how the words are delivered and what the words mean to the audience and intended market. In recognition of her work, she received a 2003 President's Circle Award from USA Weekend magazine.

Tameka is widely known throughout the media industry as an editor, writer and consultant. Her work has varied largely from entertainment and business, and more recently, her work is more concentrated on offering editorial services and communications across media, health and education-related industries.

WORDS WORK ...
Her 2006 health article written for CMA Today educated medical professionals about the added health risks associated with cardiovascular disease for Latino and African-American women. This turn at health education has led to Tameka creating and revising forms of communication sent to 200,000 employees for the business operations of the nation's largest drugstore chain. Other health education articles include reports on sickle-cell disease as an editor at USA Weekend magazine. More notably as an editor, Tameka's attention to detail and keen interest in the state of affairs led to her moderating a powerful discussion between U.S. Representative J.C. Watts and Angela Sailor of the U.S. Department of Education about the present and future of the educational system.

These experiences were a stepping stone to the start of Basics Communications, a communications and media firm that Tameka founded in 2003. The firm soon became In the Words Consulting in 2008. IWC provides effective communication services and tools that professionals can benefit. It is an editorial service based on communicating through clarity, vision and impact. The service is geared toward helping editors, publishers, trainers, businesses and other professionals communicate their ideas and content in the most appropriate and effective editorial format. Tameka has contributed articles and/or communications to CMA Today, USA Weekend, Demand Studios, WikiChicago.com, Walgreens Company and Monthly Words, a column available exclusively at www.inthewordsconsulting.com/pages/monthly-words.php.