On Mother’s Day, I feel a need to reflect. There are things I’ve learned as a direct result of my walk with my son’s Autism.

There are things that I think have value and ones I would not trade even if it meant I could suddenly wake up to a son who could say my name and speak out to me his love, frustrations, hopes, dreams, or even prattle on about Elmo or trains or the silly things. There are things I wish I could say to the world so that they could know too when I see their eyes locking on Nicholas trying to put their fingers on the things that didn’t quite fall into place or go just right. I see them looking sometimes, not quite able to figure it out. It is as if a silent game of Jeopardy is going on and it is on the tip of their tongues but not quite within grasp. And I can hear the theme music drifting on the wind. I think welcome to my life! This was my struggle for the first two years of his life. 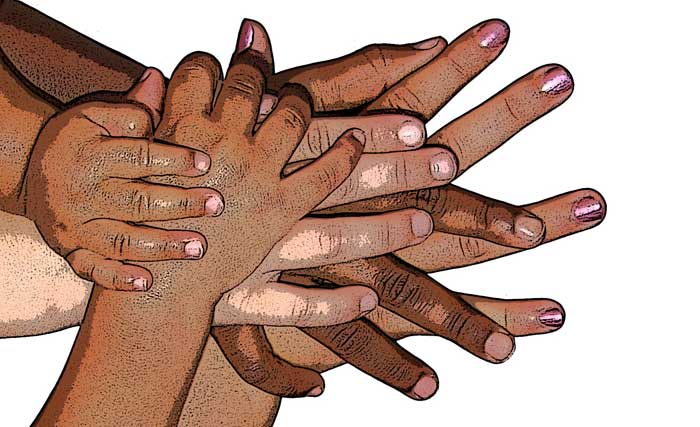 My son presents a very mild public face of Autism. He appears solemn sometimes, and stiff in his bearing. He has a very upright way of standing and looking at things. He will watch silently for a long time before he tries things. If he gets excited his arms will jerk, then his body will go tight and quiver, and his mouth will open wide in a silent grunt of “OHHHHHH!” and his eyes go spinning.

Sometimes when he is in an environment that he is comfortable in, the park or McDonald’s Playland, or visiting friends he will hum constantly and punctuate that with popping or clicking sounds. If he is happy and content he is never silent. He does not have the meltdowns that many families of children with Autism speak of but if he is frightened he will cling to me and whine. He will look at me and make the “Shhhhh” sound and then end it with “kayyyyyyy”. This is his version of me comforting him when he cries. Of course when he cries I pick him up and tell him “Shhhhh, it’s okay”. When he is frightened or nervous he says it to me to cue me to say it back.

He walks on his toes and his hands flap. If someone speaks to him he will not speak back he will stare silently or maybe simply turn away. He will not show you three fingers for his age, he will not say his name, he will not pause and turn to you if you call his name, he will not return your smiles or any of the things a neuro typical three and a half year old will do. But, these are pretty much the totality and functional show of his Autism. And many people would never know. They know something is off but cannot quite grasp just what.

I have learned that in these things, his symptoms and signs of Autism, we are very lucky. Many Autistic children are overcome by the noises, sights, smells, and textures of public places. Some can become completely overwhelmed and unable to cope. Tantrums and runs for escape can happen. And in my walk I’ve seen these kids.

One day at the Regional Center waiting for an appointment with a psychologist with Nicholas I watched through the big wide windows that overlooked the elevator bay a mom with, what is now so obvious to me, a severely Autistic 8-year-old son as they emerged from the elevator. I watched it take a full two minutes to get the boy to come inside. I heard him clicking and popping and nervously whining “downstairs, DOWNSTAIRS” I watched this mother calmly continue to redirect, digging into her bag toys out or picking him up until he struggled away from her touch, and in all her little ways slowly she was able to usher this boy into the room. When he got in he ran back and forth crying and yelling. Then finally sat in a corner under a desk and began banging his head against the wall. His mother continued to speak calmly. Sometimes he would allow her to touch him sometimes he would jerk away. I sat with my head against the wall and tried very hard not to cry.

I mention this because here lies a kernel of one of the most important and valuable lessons I’ve learned. A year ago I would not have understood. Autism, unlike many disabilities or diseases has no markable look. It has no visible badge upon the skin of the people who have it. They look as ordinary as milk. A year ago I would have thought this woman was the worst mother in the world. I would have judged her. I would have judged her child. What I’ve learned is an instant conscious dismissal of that kind of judgment. Yes, I feel it still, but I have begun to rewire the circuits of my brain and all paths lead away from those judgments today. A tantrum may be just the surface of a much deeper thing.

If I could reach inside and pass on just one of the many things I’ve learned to you it would be this one thing. In your walk through your every day life be tender when you see a child or a weary mom engaged in the throes of these things. You may think you know what is going on, a bratty kid and an irresponsible mom, but maybe in fact you know nothing at all. It may be so much deeper than that.

I’ve also learned an ocean of things about patience, love, understanding, and hope. I’ve learned how to walk in a world that speaks a different language and uses words and letters put together that mean things I’ve never ever heard of before. IEP, IFP, OT, NT, ASD, PDD-NOS, stims, sensory diets, flapping, and low muscle tones. I can have whole conversations today using these words and letters that until a year ago were as foreign to me as Cantonese still is.

I’ve heard experts tell me that my son is very damaged and tell me that it will be a very long road for us. I’ve heard things that “could” happen and develop and things that are “likely” to get worse or be harder for him. And I’ve learned to smile and thank everyone for their time. When I don’t understand I go home and I figure it out searching endlessly on the Internet or asking questions of a legion of moms who like me walk this path. And I am beginning to understand how to take what I need, apply the ones that matter to Nicholas and me, and to firmly and quickly leave the rest behind. I’ve learned to protect, guard, and nurture the things of hope. I’ve found strong purpose in staying in today. I am getting a Master’s Degree in my son’s Autism with a Bachelor’s in compassion and empathy for the symptoms of everyone elses kid’s.

I’d pass on this new strength I have if I could. I’d build up the job of motherhood and never again tear it down with oblivious judgment against anyone brave enough to attempt it special needs kids or not. It is a crazy hard job and I now know I’ve never paid it nearly enough respect or honor, not even to myself.

And these are the things that can happen when a person shatters as completely as I did. There was a beauty found in the mess of all those pretty little scattered rainbow pieces at my feet. I got the choice to let the wind take them away or to bend quickly and put them back together again. And that is what I did and in the process of mending the mess I’ve become stronger where all those little pieces meet. In the places where I’ve not yet closed the gaps I let the people in my life fill in. My daughter, husband, friends and even the surprise healing words and thoughtful actions of people who’ve stepped forward to move up from the periphery of my life have all been allowed a part in helping us all come back together. And I’d never trade that. On Mother’s Day I plan to celebrate the journey that we’ve made.

RMitchell Mar 14, 2013 4
To an unknown writer like myself, I was virtually lost while attempting to craft my first manuscript. I had a story…
Writing