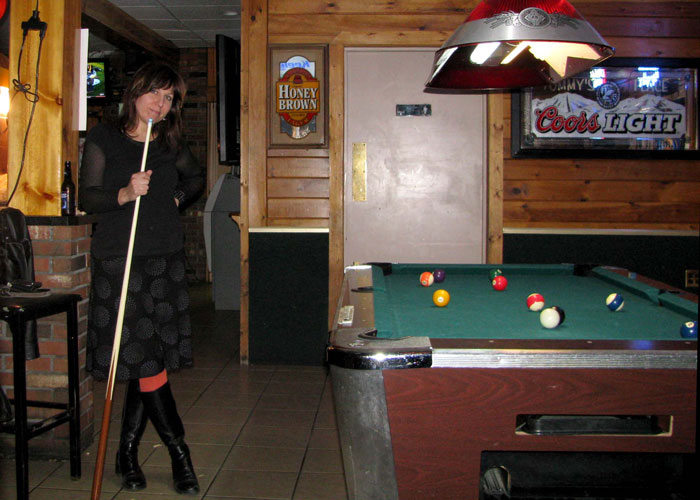 Whenever Gina and I venture into a local bar to play pool, it’s impossible for us to go unnoticed. Not that we stand out in the crowd, but we don’t exactly fit in either.

We tend to dress in dark clothing. Black boots, black leather jackets, black turtleneck sweaters. Our look is more contemporary Paris, Berlin or Moscow than it is upstate New York where the fashion du jour is a pair of worn work boots, faded jeans, and a flannel work shirt stained with paint, concrete spatter, or motor oil.

Just by entering into a gin mill, we cause the place to go eerily silent while all eyes become focused on our very presence. You can feel the glares burning into your backside like lasers.

It’s a typical winter night for us tonight at Tommy’s. The dimly lit, square-shaped joint houses little clusters of middle-aged men, two or three strong that take their respective places at the horseshoe-shaped bar.

Men with beards and mustaches. Men who have been drinking since getting off work at three. Men who have reached an age where hope for a better life is no longer a possibility and dreams have given over to desperation fueled with Jack and beer.

One man, in particular, sits in a far corner, just staring at us. His smooth-shaven face is painted with a black tattoo of banana-shaped swirls and line-stripes, a la Mike Tyson. Sitting closer to us, another man is trying to play grab-ass with the bartender, a 30-something brunette who’s wearing a tight, low-cut sweater, her chest oozing out the V-shaped opening.

As usual, we set our quarters on the old Brunswick table, and watch for anyone who might approach us. Within moments, that someone appears. He’s a short, stocky, mustached man in boots and a leather bomber.
“That’s my table,” he says. “I won the last game.”
This is where I shed the game face for the PR face.

Smiling, I pose, “Is it okay if my girlfriend and I play with each other?”
Then realizing what I just said and how it must have sounded, I burst out in laughter. But the mustached man isn’t laughing. He’s peering at us through a set of invisible beer goggles with more than your average amount of suspicion. He’s thinking, Are they playing me for the fool? Alcohol will do that to a man. Especially a small man who likes to handle himself like a big man. He stares glassy-eyed down at the empty table, then paints a grin on his face.
“Gotta settle a grudge with the old lady, huh?”
Me, still smiling.
“Something like that,” I agree.

And just like that, Gina and I are ready to rack ‘em up.
Having won the last game, she gets the first refusal at breaking. But she relinquishes with a warm smile, complimenting me on my breaking ability. “You’re much better at it,” she tells me, squeezing my arm. It will be the last nice thing she will say to be throughout the game.

I break, sending two stripes or, high-balls, into the side and corner pockets, and a solid or, low ball, into yet another side pocket. It’s my best break yet. A good break is more than just physics. A whole new world of possibilities collides with one another whenever that cue ball slams into the tight triangular collection of balls.
I proceed to drop another highball and another. Then two more. I’ve nearly accomplished what for me is a near impossibility: running the table.

Gina is standing behind me in a stylish black skirt and boots. I can’t really see her, but I sense the heat coming off her body like fumes from an oil furnace. When I turn to look at her, I see that her smile has vanished, her normally glowing green eyes now peering out at me through narrow slits. She’s holding her tongue, but I now know that the Gina I have come to know intimately over the past few months is no longer present. Gina is gone, giving way to a personality that is altogether different. This one the personality of the competitor, a take-no-prisoners-burn-as-you-go-General Sherman.

I sink another ball. From behind me, I make out a faint grunt. I have one ball left on the table. After that, only the 8-ball separates me from sure victory. I line up for what is a difficult bank shot. I miss. Facing Gina, I go to hand her the cue and rub her shoulder. But she shrugs it off.

“Now I know you’ve been letting me win,” she exhales with such painful scorn, it’s as if the words are tearing themselves from the back of her throat. Without another word, she stares down at a table full of solids. Lining up, she takes her first shot, sinks the ball. The cue positioned perfectly for a follow-up shot, she sinks that one too. The artist proceeds to sink each and every low ball, retaking the lead in one, slow, methodical, uninterrupted display of bar pool skill.

Maybe Gina thinks I let her win on occasion, but nothing could be further from the truth. I’m about to prove it too when, after handing me back the cue, I line up to sink my last highball. It’s one of those difficult long, across-the-table shots. But I line it up and sink it cleanly.
That leaves the 8-ball.

I have no choice but to bank it off a far corner, attempt to sink it in an opposite corner. I line up the shot, and let loose with the cue. But I’m not even close.  Once more, Gina retrieves the cue from me. I smile at her but she just gives me a look. You know, the look. The look that says, Say one word…Just one word…and you’re not getting anything for weeks. I know better than to speak up when I get, the look. 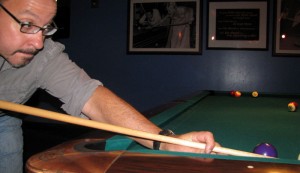 Gina leans her torso over the table, pool cue extended out before her, right eye laser beamed in on the 8-ball which lies across the table. Behind me, the entire bar falls silent. It’s as if the tension of our little friendly “grudge match” can be felt in each and every one of the barflies’ chests. And it can. Even I am secretly hoping she sinks the ball.
She shoots.

The cue ball careens across the worn felt. It strikes the 8-ball with a solid, almost satisfying, crack! The 8-ball shoots hard against a corner pocket. It bounces against the back of the pocket, pops back out, slams against both side bumpers like a basketball against a rim.
Just when it seems like the ball might pop back out of the pocket something amazing happens. It teeters back on the edge of the table and, like a diver slowly leaning her total body weight off a cliff edge, slowly falls and sinks into the pocket.
It’s over. Gina has beaten me fair and square. Much to mine and everyone’s relief.

Setting the cue back onto the table, the victor turns to me. I see then that the real Gina is back. She’s giving me those pouty little green eyes that always make me melt; a sly little smile to go with them. She slowly shuffles her way over to me, plants a kiss on my lips.

“Sorry I got upset,” she whispers. “But you know how I get when I play pool. I gotta win!” Then, reaching into her bag for more quarters. “How about one more game?” I shake my head. I’ve had enough relaxation for one night. We decide to finish our drinks at the bar. But before we gather our things, the short, stocky, mustached man shows back up.

Keeping with the rules of the house, we have no choice but to offer up the chance for him to play the winner. Gina stares him down. She’s not saying a word, but she’s shouting volumes.
Her green eyes, they say, “Go ahead, make my day!”
The mustached man gets the message. He bites his bottom lip, cocks his head.
“On second thought,” he mumbles, “It’s gettin’ late.”
He walks back over to the opposite side of the bar, disappears into the darkness. But I know precisely what he’s feeling. That some bar pool wars are better left unwaged.