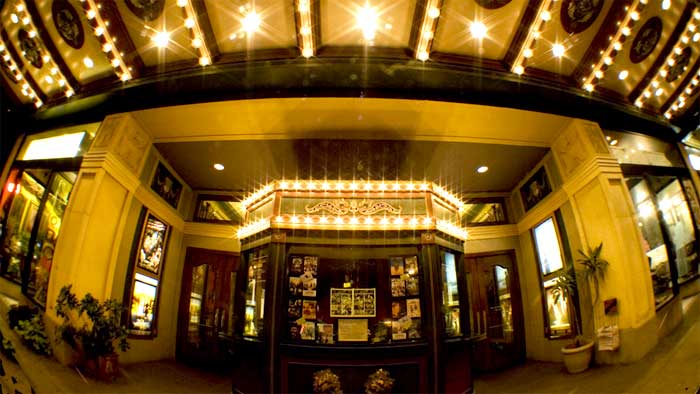 When I was a young girl living in Burlington, Ontario, I often got together with some friends to take the bus along Plains Road East to York Boulevard into downtown Hamilton. Our destination: the Tivoli Theatre on James Street North.

In those days, the Tivoli offered the latest films with such stars as Elizabeth Taylor (Who’s Afraid of Virginia Woolfe?), Annette Funicello and Frankie Avalon (Beach Blanket Bingo, Muscle Beach Party, etc.), Elvis (Blue Hawaii, Follow That Dream, etc.), Sidney Poitier (To Sir With Love), Dustin Hoffman (The Graduate), and the Beatles (Help, A Hard Day’s Night, etc.). Back then, young lovers sat in the rear of the theatre to share popcorn, pop and perhaps a few kisses as well.

That was the ‘60s – a most formative time in the lives of many people now known as Baby Boomers. For me, the Tivoli Theatre holds great memories and the day the marquee was torn down, I must admit I shed a few tears. But there are other folks even older than I who must have been shocked when part of the building was demolished.

The site actually goes all the way back to the late 1800s when it was part of a larger carriage factory. In 1924, the Tivoli was the site of vaudeville acts and the first black and white talkies. Later owned by Famous Players, the Princess auditorium presented the greatest movies of the day. It closed in 1980 and after sitting dormant for five years it reopened upstairs as a popular dinner theatre.

It was during this time that I had an opportunity to step inside this grand place once again. That’s when I learned that ghosts of the past might still linger there.

As editor of Arts & Entertainment Forum magazine in 1986 (produced by Creative Arts Inc.), I went with a friend to enjoy a sumptuous dinner and entertaining show at the old Tivoli Theatre in Hamilton, Ontario, so I could write a review on this new venue.

When I walked into the James Street North site, it was like stepping into the past with its old paintings, thick rugs and still sparkling chandeliers. This Second Empire style building with its dormer windows was actually three stories high. The dinner theatre was being held on the second floor.

Rumors had abounded that many ghosts of past employees and old vaudevillian actors still roamed the theatre – especially at night. Many folks claimed to have heard footsteps after the doors were closed for the day. One particular spirit was believed to be that of a man and his security dog that barked and cried at night. Actors and workers within the theatre also related tales of hearing voices when no one else was there.

After I entered the dinner theatre area and was seated, I spoke with the manager of the new venue and asked him about these rumors. That’s when I first heard about the ghost of a man who had often been seen there. According to Haunted Hamilton, this man was multi-millionaire, Ambrose Small, who mysteriously disappeared in 1919.

His ghost had apparently been seen in the theatre on a number of occasions. He was described, as being in a Victorian dress with a prominent, long mustache that curled at the ends – just as he used to have it while alive. Interestingly, one of the managers of the Tivoli – Loren Lieberman – took out a book on Small from the Hamilton Public Library. He did not tell his staff who this man was but simply showed them his picture. Every one of the staff members said it was the same person they’d seen within the theatre.

The Tivoli Theatre closed its doors for good in 2004 after part of the wall at the main entrance collapsed. The City of Hamilton found that the large marquee with its working lights was coming loose and deemed the building unsafe to inhabit. Sam Sniderman (Sam the Record Man), who bought the adjoining building to turn it into a record store (1988-1989) then applied for a permit to demolish the lobby area that was included in his purchase. The auditorium was still owned by Famous Players but the company wanted to sell it since it had its sites on a portion of the new Jackson Square Mall across the street.

Sniderman originally stated that he wanted to renovate the old Tivoli but this did not happen because the city refused to foot the bill. In 1998, Loren Lieberman (Vision Productions) leased The Tivoli from Sniderman. When Lieberman attempted to fix the original vaulted ceiling in the old Princess auditorium, he realized there were serious structural problems.

In June 2004, part of one wall collapsed leaving a gaping hole. With no one willing and/or able to fix the building, Sniderman applied for a demolition permit. Fortunately, the Princess auditorium was saved from the wrecking ball and in 2006, Canadian Ballet Youth Ensemble president Belma Diamante purchased the dilapidated theatre for just $1. Diamante hopes that someday, it will become a flourishing cultural centre and theatre.

To raise the much-needed capital, Hamilton residents were asked to contribute by donating a toonie or more. Janis Barlow of a Toronto restoration firm told the Hamilton Spectator in August 2008 that she thought the Tivoli was “a very handsome theatre, and well worth the effort to preserve it… There’s nothing that turns a can’t-do community into a can-do community faster than reviving something that’s important to you. It makes you feel like you can remake yourself — that you can save what’s important and be proud of it.”

However,  she added that the theatre was “too shallow” to permit full classic ballet productions and would be better suited for a “standalone entertainment complex with a main auditorium of 600 to 700 seats and a smaller, studio theatre with 100 to 200 seats for rehearsals and small shows.”

In December 2009, the $15-million Tivoli Capital Campaign included a ballet performance to raise funds for the renewal of the site and what would become the new home of a youth ballet ensemble.

I will always remember the day the first bricks fell and my many fond memories were crushed under the rubble. Now I wonder where the ghosts of the past have gone or if they still wander within the Princess theatre. Spirits often become restless when a site is renovated, so who knows if they will again make themselves known.

In The Quiet Of The Night