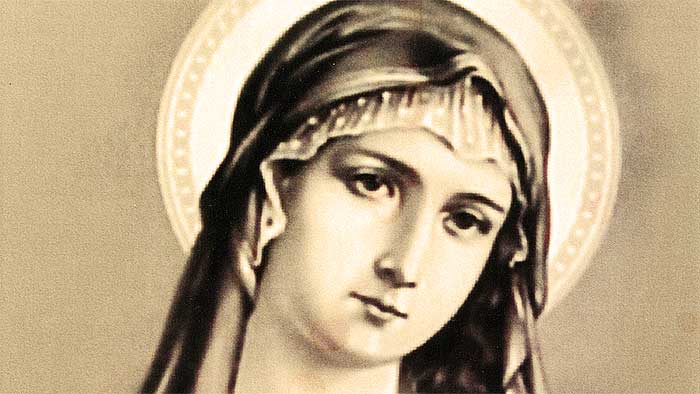 Every believer knows that miracles happened in Biblical times but do they still happen today?

That is a question many southern Ontario residents may be wondering since the Windsor Star reported a ‘weeping’ Virgin Mary statue on November 2, 2010. It seems the statue weeps tears of healing oil and folks from all over arrived to see it on the front lawn of Fadia Ibrahim’s Windsor, Ontario home.

It was reported that the statue smiles during the day but weeps at night. Although neighbors were up in arms over the nightly vehicles parked along Garvey Crescent over the past three months, those who made a vigil to the site claimed this miracle was real.

One woman who took her two children to see the statue said she wanted to see for herself if the Madonna cried tears of oil.

“Seeing is believing,” said Janet Mendez “and definitely we do see her weeping – weeping for the world, weeping because there’s no love left in this world.”

“I think it’s a work of God and she wants the people to go back to church,” said Ibrahim.

The 48-year-old said she believes it is indeed, a miracle and that she has been communicating with the Virgin Mary for about two years. However, because of complaints by her neighbors, the city became involved. It seems the statue was actually inside a structure that was built on the front lawn and encroached onto the front yard. There was also no building permit issued for the structure.

Even though city solicitor George Wilkki said the situation could easily be resolved if Ibrahim applied for minor variance and a building permit,  she decided to remove the statue and send visitors away.

“I have been insulted and saddened that people of high authority in the Orthodox Church, the Catholic Church, and the media are now defaming myself and my family,” Ibrahim told the Windsor Star.

It is difficult for this Examiner to imagine that so many folks got upset when there was what seems to be a real miracle in their midst. Instead of embracing it, they chose to take the stance that it was simply a nuisance. Yes, cars blocked their street at night. Yes, people arrived in droves – and why wouldn’t they?

The question that one needs to ask here is: is God any less powerful than He was 2,000 years ago – or even 100,000 years ago? Of course, the skeptics would have a field day with this, as they always do when something ‘paranormal’ seems to have occurred.

The unbelievers and atheists would call this a hoax. They would say those involved were just publicity seekers or wanted money. Of course, there are people who would do that but there have been many similar modern-day miracles over the years that are worth remembering.

All one has to do is turn on the television to see daily reports of war, murder, rape, environmental disasters, and any other vile act man could possibly commit. Is it any wonder that humans need a reminder now and then that God is more than a little concerned over our behavior? And is it any wonder that the Madonna might cry for humanity as well?

Pam Martin, 43, said she was in awe of the statue. “This is just incredible,” she said. “I watch the news and I can’t help but be saddened by what I see, but how much more for this woman? This is a woman who watched her own son die on a cross. Now she’s weeping for us because we’re killing this world.”

In the past, there have been many incidents of statues and pictures that wept oil, water and even blood. Last July, an oil weeping Madonna was reported at an Orange Grove Street home in Glendale, California.

Anahid Sallakian said she was praying one evening when she saw “a star appears on the statue, according to a report by KTLA.com. (www.ktla.com/news/landing/ktla-weeping-virgin-mary-glendale,0,7940661.story) When she touched it, “her hand was covered with oil.” She added that this phenomenon continued for nine days.

In 2006, Esat Altindagoglu in France received a painting of the Virgin Mary from his wife, Sevin, who apparently got it from a Lebanese priest. Since February 2010, the painting has been crying tears of oil and thousands of folks from across Europe have flocked to the home to see it. An Orthodox priest said mass at the home to thank the Virgin Mary and according to The Huffington Post, it is hoped that this event will be officially recognized by the Roman Catholic Church as a bona fide miracle.

In 2003, BBC News reported on a marble statue of the Virgin in a Roman Catholic Church in Chittagong, Bangladesh. Many believed that she cried due to the extreme violence occurring during elections within that country. Though the country is primarily Muslim, that did not stop this miracle by a Christian icon.

Only One Event Deemed a Miracle

A quick Internet search uncovers countless other such reports. However, the only incident ever approved by the Roman Catholic Church was a wooden statue of the Virgin Mary in Akita, Japan. Sister Agnes Katsuko Sasagawa claimed the statue wept 101 times over several years while she prayed and spoke with it. Sister Agnes, who said her guardian angel also appeared, added that the statue also perspired what seemed to be perfume.

The statue’s right palm showed a wound that bled and Sister Agnes had stigmata as well. Interestingly, while Ibrahim spoke with folks in front of her Windsor home, her left hand became covered with an oily type of moisture. She said this often occurred when she spoke about the Virgin Mary.

A professor of legal medicine at the University of Akita found that the statue emitted real human blood (O, B, and AB), tears, and perspiration. In 1981, was confirmed by a doctor that a woman with terminal brain cancer was healed as she prayed before the statue and a second person was cured of deafness. In 1984, a local bishop declared the events true miracles and in June 1988, Pope Joseph Ratzinger, then a cardinal, agreed.

In the Windsor incident, a woman who prayed nightly at the statue credited it with healing her 17-year-old granddaughter of leukemia. Carmela Montilla said after Ibrahim anointed her with oil, “her blood counts immediately returned to a normal level and the girl was able to go to school again. She just put the oil on her, prayed for her… The doctor said her blood, everything was normal.”

If this can be verified, perhaps this incident in Windsor could be deemed a bona fide miracle by the church as well.