Ever wonder how the Inaugural Ball got started?
It was Dolley. Dolley Madison.

The inaugurations of George Washington, both in New York City and Philadelphia had been solemn affairs.  No government of the “we the people” type had ever been attempted before, and far from rejoicing, the mood was somber and, in the Biblical sense, awesome.  Martha Washington didn’t arrive in New York for several weeks.

When John Adams was inaugurated, Mrs. A. was back in Massachusetts nursing John’s elderly mother, who would succumb within the month. 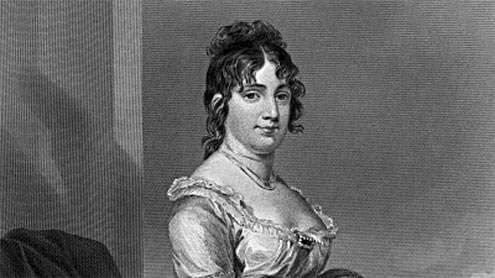 Thomas Jefferson, who inherited the new and unfinished White House only a month after Abigail Adams hung her laundry in the East Room, was always a man of the “small table,” preferring a dozen or so people to the throngs.  Jefferson’s southern hospitality was indeed gracious, but he was a long-time widower, as was his Vice President.

The ranking woman of Washington, therefore, was Mrs. Madison, wife of his Secretary of State.  As such, she was recruited from time to time to play hostess for the semi-reclusive President.  Thus, to fill a much-needed void in the fast-growing town, the outgoing Dolley Madison opened her own doors, providing a place for meeting, greeting, and polite politicking in an informal and non-threatening setting.

Most Washington officialdom, be they congressmen or diplomats, found accommodations in boarding houses.  In 1809, the town was little more than a village, although it would grow every year.  Where could people meet and be introduced?  Where could men discuss the events of the day “off the record”?  The parlors or salons of the fashionable and well-placed women of the day provided the venue, and at the top of the list, was the home of Secretary and Mrs. Madison.

The movers and shakers of official Washington flocked chez Madison for luncheons, receptions, teas, dinners, and suppers, which Dolley was happy to host several times a week.  The socially talented Mrs. M. had a true gift for inclusion and an innate diplomacy, and even those with opposing political views could come to Mrs. Madison’s parlor, sure of their welcome.  No one ever had anything but the highest praise for Dolley.  She had the rare quality of counting both men and women among her many friends and admirers.  Even more important, the praise and the friends were sincere.

By 1809, when James Madison was inaugurated, Washington had grown substantially, as had the country, which was now celebrating its 20th birthday.  Always ready for a party, Mrs. Madison decided on an Inaugural Ball held at Long’s Hotel near the Capitol to commemorate the occasion.  More than three hundred invitations were issued – the largest number of guests ever seen at an event in the city before.  Musicians were engaged, caterers and confectioners were hired.  Decorations were hung and hundreds of candles lit the room.   Dolley was dazzling in her buff-colored gown and matching turban with feather plumes – and both buff and turbans became the fashion of the day.  Everybody who was anybody in Washington came in their finery to make merry, to dance, to dine and to enjoy.

The coup de grace, however, came at the supper.  Dolley Madison, as was her custom, sat at the head of the table (relieving her reticent husband of hosting and serving responsibilities).  To one side of the First Lady sat the Minister of France, on the other, the Minister of England.  Their countries had been traditional enemies for centuries.  They were currently at war.  Under any other circumstances, they would not have even been in the same room together, let alone the same table.  But they both liked and admired Mrs. Madison, and would not wish to offend her.  Only Dolley could have managed that feat!

And the Inaugural Ball has become a quadrennial tradition for two centuries.

Nancy Duci Denofio May 23, 2013 4
There is nothing better than real authors and writers talking about writing. This is a sample of some familiar…
Writing