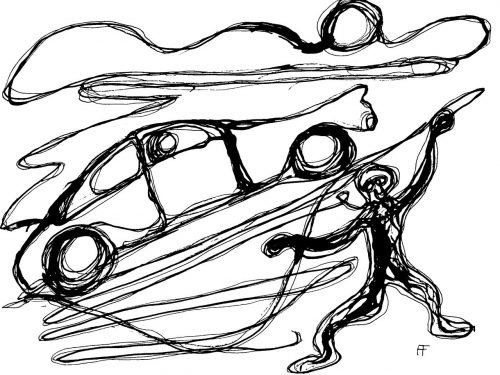 “In my youth, I was a bit of a wanderer. I used to travel to different parts of the country and live there just to see what it was like. I was in New England at the time. My girlfriend, Teri, was giving me a lift one Saturday morning on her way to work. She was driving me from North Salem, New York to Newtown, Connecticut, where some friends lived.”

“After dropping me off, she needed to turn around and head back to her job, but we couldn’t find the right exit off the parkway. So I told her to pull over on the grass median in the center. She was not a very experienced driver and had not made such a maneuver before. When the car came onto the grass it was going too fast and instead of coming to a stop parallel to the road she spun 90 degrees and ended up suspended over a trench in the center of the median.

If she drove forward the car would bottom out and damage the undercarriage while getting stuck on the top edge with the rear end in the ditch and if she backed it up there would be a similar outcome at the other end. She was stuck and realizing this about to burst into tears. For some reason, I was optimistic we could get ourselves out of this fix.

Franklin said “I picked up one of the planks and carried it over to the ditch, placing it under the car from the rear tire to the front tire on the passenger side. It just fit! I ran back and grabbed the other plank and placed it exactly the same between the driver side tires. These planks formed a kind of improvised bridge across the ditch. The thing was, would they hold the weight of the car? There was only one way to find out.

“Oh for heaven’s sake,” cried Joe “Now you’re going to tell us you have supernatural powers!”

Maya Kavita Oct 13, 2010 0
The other day, I was in a ladies clothing store and met a friendly woman who quickly engaged me in conversation.…
Writing