Illegal Presence Has Become a Fellony

By now, surely everyone is aware that Arizona has passed into law a bill making illegal presence in this state a felony. Boycotts in response to this legislation are in process, and demonstrations against Arizona and the law are occurring in various cities across the country.

But what to boycott? Arizona Tea? It’s manufactured in the Northeast. The Diamondbacks? Would anybody care? I’ve been boycotting baseball since the 1994 strike/lockout, whichever — I don’t remember who closed down that season. Baseball lost me then, and they haven’t recaptured my interest. Lettuce? How do you know where your restaurant salad came from? 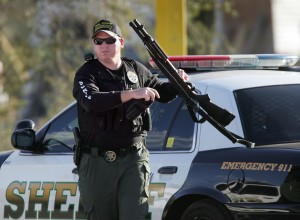 It all seems a bit silly to me. Especially when those who are urging boycotts, for the most part, don’t live in Arizona and have no idea what’s going on here.

Arizona is being overrun by illegal smuggling. It’s everywhere, and the effects of it are being felt throughout Arizona. No doubt you’ve heard of the murder of prominent rancher Robert Krenze. Krenze had found tons of marijuana on his vast, thirty-five thousand acre ranch and turned it over to the Border Patrol. He’d suffered the destruction of his fences, his cattle and damage to his grounds, not to mention a vast amount of littering.

Then last week, a deputy sheriff in Pinal County, just north of Tucson at Case Grande, was on regular patrol when he discovered bales of marijuana and five smugglers. They shot him with an AK-47. The deputy will survive, but the next day, a sweep of the area discovered seventeen more smugglers, all of whom were arrested, three of whom fit the descriptions of those who’d shot the sheriff.

Arizonans see this sort of crime every single day. It’s not unusual at all; it’s become a part of life in southern Arizona. Streets in my neighborhood have signs erected by the Feds warning of illegal smuggling activity. Drive just about anywhere in southern Arizona and you will see these signs. They’re hard to miss. They’re large and bright orange.

Both humans and drugs are being smuggled through Arizona. Phoenix has the highest kidnapping rate in the world. Drop houses are common, and the violence associated with these activities is becoming an everyday occurrence. I-19, which runs from Nogales to Tucson, is commonly known as Smuggler’s Alley, but these activities extend far beyond interstate 19. Interstates 10 and 8 are also frequent passages for the smuggled goods and people. Arizona has become part of the ongoing Mexican drug lord battleground.

But that’s just the side of smuggling commonly reported. What is not reported, except locally, are the number of people killed on the state’s highways because of smuggling activities. It’s commonplace for a van or bus loaded with illegals to wreck on one of these highways — usually I-10 — tossing dead bodies across the roads, medians and berms. One such accident killed twenty-four illegals, another last week killed twelve. Often, other vehicles are involved, as these smuggling vans and buses usually travel at night, sometimes without lights.

Arizona residents are scared, and efforts by the Feds to curb or control the border have failed.  In many areas of the Arizona border region, an illegal can just walk across the border line. Indeed, Robert Krenze’s murderer was tracked back to Mexico; he just stepped across the barrier.The Fence Project, which was to build a high, difficult to cross barrier, was stopped by environmentalists and those who want an open border. So many of the areas of the southeastern Arizona border, particularly those areas east of Nogales, have a barrier a cripple could cross without breaking a sweat. Home invasions, destroyed fences and robbers lying in wait for smugglers are on the increase. Homeowners who live along these smuggling routes are finding spent and unfired AK-47 rounds in their backyards, near their kids’ swingsets. The border inspection stations send many smugglers through housing districts, moving much of the smuggling activity from the highways to the housing districts around them.

The Feds have been unable to stop the flow. The Border Patrol does what it can, but much of their activity is spent rescuing illegals who are dumb or desperate enough to attempt to walk across the Arizona desert in summer. The Border Patrol rescues numbers not in the hundreds but in the thousands each year in this state. And many of these poor people don’t make it; they die in the desert. The death toll is unknown, but bodies are found each and every day, regardless of season.

Ironically, Janet Napolitano, Secretary of Homeland Security, demanded the National Guard patrol our borders when she was governor of Arizona. She got no response. But now that Janet’s the Homeland Security Secretary, she’s changed her mind and refused to bring in the Guard.

No doubt, politics are involved.

The current federal administration seems more focused on attracting Hispanic voters and granting amnesty than they are in protecting our borders. They talk of immigration reform, of a path to citizenship. But how can one have an effective immigration policy if one cannot control one’s border? The Feds oppose Sheriff Joe’s Maricopa County (Phoenix) policies of sweeping up illegals, claiming he’s guilty of racial profiling.  The Administration even went so far as to deny Sheriff Joe the assistance of ICE, those agents who are supposed to be focusing on smuggling.

None of this makes any sense unless one looks at it from the political side.

So, lacking any effective federal response, Arizona’s legislature passed a law which many, including myself, think will eventually be overturned. It’s a stupid law. Instead of just passing a simple law making an illegal presence in Arizona a felony, the state legislature added nebulous, ambiguous language which guarantees that anyone attempting to enforce the law — or refusing to enforce the law — will get sued. Then, faced with near universal  criticism over the bill’s language, they amended the statute and made the language worse. The lawsuit risk is so prominent, some county sheriffs have said they won’t enforce the law, because they’re in trouble no matter what they do.

And sure enough, there will be cowboy sheriff deputies who make dubious arrests. Count on it. Lawyers will flock to the courts filing cases on all sides of the issues.  The law should have been called the Lawyer’s Economic Recovery Act.

But of course, politicians rarely do anything simply.

The legislature did do one thing simply though: They approved driver’s licenses as proof of legal entry. How much of a burden is it to produce your driver’s license upon demand? Heck, I have to produce mine every time I make a purchase at Best Buy. Indeed, a Hispanic woman in Tucson went before the Tucson City Council Friday and made the same point. She produced her license, and said, “There. How hard was that?” She went on to say she followed the route to become a naturalized citizen. She said she resents those who seek what America has to offer, but do so illegally.

I agree with her, as do most Arizonans. Indeed, while many Arizonans agree with me that the language of the new statute sucks, over seventy percent of the Arizona population agreed with the bill’s intention: We must control our borders.

So what are we to do with all these illegals we’re going to arrest? Arizona is hurting just like every other state. While Sheriff Joe has no problems adding tents to his Tent City Jail, other counties won’t approve that option. One suggestion I liked — which of course has no chance of passage — was to dump these illegals at either the California or New Mexico state lines. Los Angeles, San Francisco, Santa Fe and Albuquerque have all declared themselves to be Sanctuary Cities. Okay, if these cities want our illegals, maybe we should accommodate them.

Meanwhile, Arizona is a war zone. Gun sales are at record levels, and a new militia has formed and claims it will enforce the laws, patrolling the border armed to the teeth. Now, that’s something to worry about.

The problem is not Mexicans or other Hispanics. You can’t live in Arizona without encountering Hispanics. They’re everywhere, and by and large, they’re hard-working, good people, with family values, and deserving of respect and admiration. The war is not against them; it’s against those who are entering our country illegally. And not all of these illegals are Hispanic. Believe it or not, there are a huge number of Chinese illegally slipping across our borders. And it’s not unusual to find copies of the Quran spread across the smuggling trails. The porous Arizona border makes for easy access for would-be terrorists, and there are plenty of coyotes who know the routes and will take them across for a fee.

So… while I don’t support the language of the new Arizona law, which will be effective late July, I fully support the intention behind it: controlling our border.

But as is often the case, our legislators screwed it up.

Hank Quense Feb 7, 2015 13
My publishing company, Strange Worlds Publishing, uses both Smashwords and Kindle to distribute my ebooks.  I did…
Writing