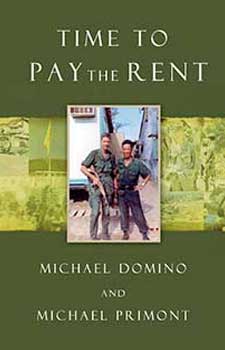 Mike and Mike travelled back to Vietnam 40 years after the war. They travelled through the country and ended up at a place called Rach Kien, and at the house where Michael Primont lived for a year.

Although not much has changed over the years a lot actually did! The head of the house was a small boy and is now a grown man and head of the family. It was so interesting reading about all this. I feel that IF Michael Domino through this book can convince 1 vet to go back to Vietnam and experience it in peacetime so that healing can begin, he has accomplished a lot more than just telling the story.
For me this book opened a whole other side of war, which I (believe it or not) have never ever considered before. That thought started with the paragraph about the diploma of commendation for the father and previous owner of the house. He was a Viet Cong Guerrilla, a war hero in the eyes of his children and the government. Stating “excellent achievement for fighting against the US Army, and for saving the nation” – translated he was the enemy.

I was born in 1960 in South Africa and had never heard of the Vietnam War until I was about 16 – by that time our country was involved in a war of its own, in Angola/South West Africa (Namibia). Michael’s book made me realize that there are 2 sides to everything, including war. To USA the Vietcong was the enemy, to the Vietcong the USA was the enemy. That people, trough no choice of their own, sometimes are pushed into a situation they do not really want to be in. That somebody’s little new born boy for whom they had such big hopes will someday become a war hero fighting for his country. That is so sad. It made me also think about WWII and all those German Soldiers being called to serve their country in the war.

This book just made me realize that we dream big for our children, but that something like war can crush all those dreams. I do not know if Michael Domino intended to bring this message home but that was the realization I had when reading this book.

I do really recommend everyone reading this review will get the book and read it. Not only for what I saw in it but just for the great story being told. I love Michael Domino’s style of writing. After having read this book I have looked him up on the internet and have read some of his poems. I must say I was really impressed and have fallen in love with his poetry. I would love to read more of his work.
▬ Elsabe van Zweel


TIME TO PAY THE RENT

By Michael Domino and Michael Primont

Rach Kien is a small village in Long An province, about thirty miles southwest of Saigon. It was supposed to be a model for the improvements that the American occupation of South Vietnam was going to bring to rural areas. Rach Kien was one of the poverty stricken villages that were prime recruiting grounds for the Viet Cong. If the Americans could turn such a village into a safe and productive example of life under the protection of the American-trained South Vietnamese army, then the rest of Vietnam might follow. This was easier said than done.

In 1966, before it was safe for American advisors to enter the village, US Marines engaged in several bloody battles to drive VC guerrillas from Rach Kien and the surrounding countryside– or so they thought. In reality, the VC never went away. They just went back to farms and rice paddies. They hid in tunnels in he daytime, emerging at night to launch mortar attacks and ambushes against American advisors and their allies. The enemy controlled the night in Long An province, including Rach Kien. Such were the conditions in 1967, when my cousin, Michael Primont, was sent to Rach Kien as an “advisor” to South Vietnamese forces in the village. Michael was one of six US Army advisors in Rach Kien. They directed the construction of a school, started a brick factory, the products of which they used for housing construction, and distributed school books, paper, and pencils, etc. They also accompanied local Vietnamese militia on combat operations, and were always on alert for attacks and reprisals. At night, they slept “with one eye open.” They took turns at the short-wave radio that served as their link to the outside world. The Americans never really knew who was who in Rach Kien. The man who spent his days plowing a ﬁeld with his water buffalo, the shopkeeper at the market, the local butcher, all could be part of the secret nighttime militia. The Marines had pushed the VC out of sight in 1966. They had to deal with an invisible enemy.

Ngi turned to his sergeant. The two conferred for a couple of minutes and then the sergeant crawled away. He and three of his men slithered into the stream, crawled up a slight rise, and spread out about thirty feet. Then, the soldier on the far right rose to a crouch. Water dripped off his nose as he crept to the edge of the village. He disappeared behind a hut. In less than two minutes he came out, grinning. With his left arm raised, he gave the “okay” signal. I immediately lost a little of the tension in my shoulders and neck.

The cluster of seven bamboo and palm leaf huts in the village had not been long abandoned. The men reported that three of the cooking houses still had ﬁres burning, and all of the huts showed signs that people had slept in them that night. Who-ever they were they couldn’t be very far, and they might be preparing to surprise us. Lt. Ngi ordered about twenty of his men to form a perimeter around the village. The remaining soldiers ripped apart the huts.

This village was much like every other that I’d seen. It was set on high ground. The ﬁfteen-foot square huts were just frames of bamboo poles covered with palm leaves. Inside each hut was what looked like a ﬂat igloo of dried mud used for shelter from the American artillery shelling that fell randomly many nights and days of the war. As the soldiers prepared to pound down one of the igloo’s roofs, they found a ten-year-old boy hiding inside. He must have slept through our helicopter alarm clock. They dragged him outside and showed him to the lieutenant and to his stern sergeant. I’d been through this before. I knew what was coming and dreaded it. 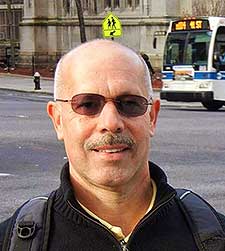 Michael Domino is a writer and businessman who splits his time between New York and Florida. He is married with three daughters, and has authored several books, including his latest collection of eclectic Manhattan stories, Park Avenue to Park Bench.

Michael Primont is a Vietnam combat veteran, who practiced law in Seattle and is today retired and living in Vancouver, Canada.

He has also written and produced dozens of music and spoken-word videos and two short films.

Michael Domino is the author of Loud Whispers, Cadillac on the Bowery, Park Avenue to Park Bench, Time to Pay the Rent, and Wandering Mind.

Short story writer and poet Michael Domino has lived in New York City for 10 years and has lived and worked within a 50-mile radius of Manhattan Island for most of his life. Captivated and sometimes overwhelmed by The City, he has come to know that the essence of Manhattan life is contained within its people – from all income brackets, all living situations, and all ages to all backgrounds, personalities, and circumstances.