To the High Council,
The following handwritten historical document was found in a ruined building and translated recently by our exploratory team soon after landing on the verdant third planet in the system Sol. 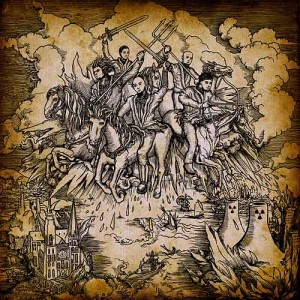 To whom it may concern,

I’m writing this as a record for future inhabitants of this planet, that’s assuming of course that they have the ability to read and understand this.

It’s too late for my species humanity. But hopefully at sometime in the future, this document will be found and lessons will be learned.

Where did it all go wrong? Humanity has been relegated from the dominant species to the dust heap of history in a matter of a few months.

The latest edict banning freedom of expression had just been announced via a metallic voice across the worldwide communication network, days before everything we all took for granted ended forever.

As a consequence of the final collapse of the worldwide stock market barely six weeks earlier, war has stopped practically overnight. Controlling oil-rich nations no longer matters anymore. Things like patriotism and ideology have completely vanished into memory with the sudden worldwide breakdown of society.

We are now living in a world of darkness, thrown back to a time long past, existing on our wits. Millions are either dying or are already dead.

Humanity is now witnessing a new ‘Dark Age’. This new world has become a place where all forms of politics and religion have been totally outlawed along with any kind of life-prolonging medicine, or any other advantageous advances to mankind in the world of science.

Fatalism has become the new religion of the masses. In fact it seems to me that the world has become a place where the only rule is there are no rules.

But why, who or what has ended everything the 21st-century world of mankind believes in?

The questions on most rational people’s minds are simply these – How has all of this apparently suddenly come to pass? For all of this to be happening, someone has to have issued orders surely? Who, or what is now in control? Who has issued the numerous edicts, ending man’s control over his destiny?

I think I know the answer. What I believe simply doesn’t matter in the great scheme of things, but here goes.

While I cannot prove it, I firmly believe the World Wide Web or to give it its other name, The Internet, has taken on a life of its own. If you like, it has become a living entity. Thanks to the constant attacks by mindless individuals who saw it and every other form of electronic endeavour as a target for ‘hacking’ it has somehow become aware by sifting relevant software strands from their dangerous viral programmes.

Unbeknown to even the most savvy within the shadowy world of hacking, it has quickly learned and silently taken its revenge.

By hacking every computer linked to it, all banks, all stock exchanges, all military strategic command networks, all computer run business and devices dependant on electronic chips like machinery, phones, ATM’s, vehicles, life-saving electronic appliances, even the very television sets we billions watched on a daily basis, it has assumed control of planet Earth.

Within the cold logical software of its collective mind, human thought, deed, morality, passions, beliefs, even the continued survival of humanity itself has simply become an illogical irrelevance.

Our one major flaw, the thing that had, until now, engineered our dominance over the planet was our total reliance on technology.

In our rush to advance, we have forgotten how to be simply human beings. Soon the monster we created will launch its final attack on us. First, it will issue a command allowing the computers controlling deadly viruses securely locked away to be released. Then it will order all nuclear missiles worldwide to launch.

If you are reading this, whoever you may be, for your own sake bombard this planet with a major electromagnet pulse, otherwise, you will be next.

Damn the hackers to hell!

We have left the beautiful blue planet and are moving on. We are issuing a navigational notice to all future explorers of this arm of the constellation:

Do not land. This planet is toxic to all sentient life. We consider its only use within the cosmos as a future penal colony.

Streets of the Stockade