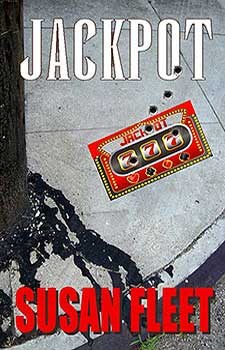 For anyone who loves the gritty, the witty, and perfect descriptions that lure the reader in and make them feel as if they’re standing on-site literally being witness to a crime, Author Susan Fleet has continually given this ‘gift’ to thrill-lovers with each novel. This time around, Fleet has decided to lead readers back in time – offering a prequel to her Frank Renzi stories so that everyone can see how his transformation, love and hate of the job, and his pure dedication came about.

Feeling like a big screen movie, the curtains part and we begin with an elderly lady living in Chatham, Massachusetts. Her TV has just gone on the fritz and she’s waiting for the cable man to arrive. Sadly, her cable guy just happens to be a brutal killer with a strange mission – taking out winners of the Lottery.

Fleet has done another superb job of bringing her surroundings and her characters to life. In fact, there will be some readers who may never take a chance on the Lottery again.

Characters you have fallen in love with open the doors to their past, where they’re not all that nice at times. The reader will want to help them, hurt them, and sometimes yell at them; but, in the end, they will come to terms with Renzi’s past and be eager for another Susan Fleet novel in their future.

Quill says: Prequel’s are risky in a tremendously great series, but Fleet (not a surprise) has pulled it off with style!
─ Amy Lignor

Florence peered out her living room window. What a dismal day. No sun, just sullen gray clouds like yesterday. And no sign of the cable company van. At 9:30 a man from the cable company had called and said they were having problems in her area. As if she didn’t know.
Wavy lines filled the forty-six-inch screen of her new TV set, and static was hissing from the speakers. The man said he’d be here soon to fix it, but that was twenty minutes ago. Where was he? If he didn’t hurry up, she’d miss Regis and Kathie Lee. Poor Kathie Lee. Her husband had a roving eye.
Florence and Chuck had been married forty years, and she was certain he hadn’t so much as looked at another woman until the day he died.
She looked at the lumps of dirty snow on the driveway across the street. Ginny was in Florida and wouldn’t be back until Memorial Day. She sure did miss Ginny. This had been a long lonely winter, terrible storms, the snow piling up in huge drifts. Ever since Chuck died, she had to hire a man to plow her driveway so she could go out for groceries and visit her son.
Her heart skipped a beat as the cable company van stopped in front of the house. Halleluiah! Maybe she’d get to watch Kathie Lee after all. A short chunky man in a blue uniform got out and came up the walk lugging a big metal toolbox. Goodness, why didn’t he wear a jacket? It was chilly today.
She opened the front door, then the storm door. A gust of cold air made her shiver. “Thank goodness you’re here. Regis and Kathie Lee are on at ten and I’d hate to miss them.”
The man glanced at an order form on his clipboard and smiled at her.
“Don’t you worry, Florence. I’ll have it fixed in a jiffy. You don’t mind if I call you Florence, do you? My boss says it’s friendlier. We like to keep our customers happy.”
What a nice young man, thick blond hair, chubby round cheeks. But beads of sweat dotted his forehead. Strange. “Your name is John. It says so on your pocket. Come in. It’s cold out there.”
The man went in the living room, walked past her new recliner and set the toolbox down on the carpet in front of the television set.
“What’s wrong with the cable connection?” she asked.
“Just a little glitch. Don’t worry, I’ll fix it.” He knelt beside his toolbox and gazed up at her.
His blue eyes had an odd look in them, like a cat about to pounce on a bird. Why was he looking at her like that? It made her nervous.
“Could I have a drink of water? My boss sent me out early this morning because of the problems. I already helped three customers and I’m behind schedule.”
Florence hesitated. She wanted to keep an eye on him while he fixed the TV, but she didn’t want to be rude. “Goodness, here I am thinking you’ve got such nice rosy cheeks and you’ve been hard at work all morning. Wait a minute and I’ll get you a glass of water.” 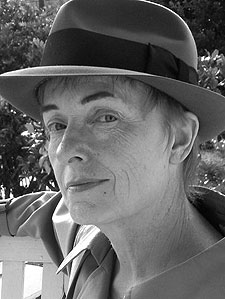 For many years award-winning novelist Susan Fleet worked as a professional trumpeter in the Boston area. While teaching at Brown University and Berklee College of Music, she began writing crime fiction. In 2001 she moved to New Orleans. The Premier Book Awards named her first novel, Absolution, Best Mystery-Suspense-Thriller of 2009. DIVA, followed in 2011; Natalie’s Revenge, in 2012; Jackpot in 2013.

Susan studied trumpet with her uncle at eight, joined the musician’s union at fifteen, and began playing with the local concert band. She later studied with Armando Ghitalla and Roger Voisin, principal trumpeters of the Boston Symphony. Her 1993 CD, Baroque Treasures for Trumpet and Organ, won critical acclaim in Fanfare and American Record Guide.

A recognized authority on female musicians, in April 2012 she had the honor of introducing former BSO principal flutist Doriot Anthony Dwyer at the Rochester (NY) Music Hall of Fame Awards. Susan’s e-book, Women Who Dared: Trailblazing 20th Century Musicians, spotlights the careers of violinist Maud Powell and trumpeter Edna White. Susan also blogs about true crime at DARK DEEDS: Serial killers, stalkers and domestic homicides. Susan now divides her time between Boston and the Big Easy, and is hard at work on her next Frank Renzi mystery.