Things sure have changed since I was a kid. Nowadays they buckle up for safety and sit in the back seat in a special booster chair complete with belly pad, plush seat cover, head pillow and three position crotch strap.

I remember standing up on the front seat of our Ford Fairlane, next to my mother.  More than once, I was pitched head-first into the metal dashboard when she had to make a quick stop. I’m fine, though, honest. 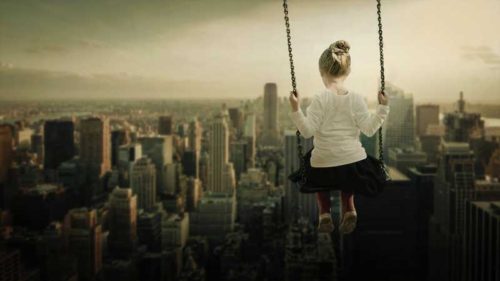 Then there was the little, blue, enamel pot she kept on the floor in the back seat for emergencies. God forbid, we actually try to find a restroom. That would have required making an unscheduled stop.  I sometimes wonder what happened to that pot.  I hope it never made its way back into the kitchen. My sister referred to us as the squat team because it took a lot of skill to make use of that pot in a moving vehicle without tipping over.

Mom was a very serious driver. I can’t ever remember her turning her head from side to side. Her face was filled with determination as she glared at the road ahead. If I pointed to something of interest, she would say, “I can’t look now, I’m driving.” I thought this was particularly amusing when we had reached our destination and she was zooming right past it.

Mom refused to drive on the freeway. She said she was just too nervous. Therefore, whenever we went any distance, we would have to negotiate the side streets, stop lights, traffic and add several minutes per mile respectively. I remember clearly, it took quite some time for her to get my Brownie troop from Canoga Park to Los Angeles to see a theatrical performance one fine Saturday afternoon, which turned into the evening performance.

Aside from not driving the freeway, mom never made left-hand turns. She was afraid to inch her way into an intersection and stop. Her workaround was to only make right-hand turns. It made sense to her.  However, when I was a teenager, I did a stupid thing.  I tried opening my bedroom window by pressing my hand against the pane instead of the sash, and it went right through the glass. I got a very nasty cut and my mother’s face drained of color when she saw the bloody towel. She grabbed her purse and keys and ordered me into the car.

The closest hospital was fifteen miles away.  I pressed the towel against my hand to stop the bleeding and felt the cloth getting warmer and heavier. I pushed harder, fearing that I had cut my wrist too. I looked over at the determined look on my mother’s face as she screeched the tires around her right-hand turns. At this rate, I figured it would take us a good forty-five minutes to get there. I was trying to remember how much blood the human body holds, but I never listened in biology class. I was too busy watching the white saliva globules collect in the corners of Mr. Morley’s mouth, and guessing how long he could talk before licking them away.

“Mom, how long does it take to bleed to death?”

Know what she said?