There’s something about a murder mystery aboard a ship at sea…the culprit can’t escape easily; but neither can the intended victim.  Writers like Agatha Christie and Ian Fleming have used this vehicle to set up plots and sub-plots to make the reader roll with the waves as they sort through events and clues.

Robert Thornhill skillfully brings this setting into the world of Walt Williams as he presents us with mystery/comedy #11, LADY JUSTICE AND THE CRUISE SHIP MURDERS.

With Thornhill’s skill of interweaving story lines, we learn that another couple from KC are also headed to Alaska to hopefully retrieve a hidden treasure trove of gold. The plot thickens when a murder is committed on the first night aboard the ship right down the hall from Walt’s room.

Continuous action will hold the reader’s attention, but Thornhill also provides moments of prose about the beauty of Alaska and humorous events that occur on the ship. Finally, the culprits are caught and Lady Justice triumphs once again.  This is a pure fun and entertainment…keeps you turning the pages until it’s done!

PROLOGUE
Mark Stewart examined the postmark on the letter that his wife, Amy, had handed to him when he arrived home from work.

“Skagway, Alaska,” he muttered. “We don’t know anyone in Alaska, do we?”
“Not that I know of,” she replied. “Maybe if you opened it instead of just staring at it, you would find out who sent it.”
Mark, a junior partner in a Kansas City law firm, was the cautious one in the family. Amy was the more adventurous of the two.
Mark tore open the envelope and pulled out a letter that had been neatly typed.

Dear Mr. Stewart,
By way of introduction, let it suffice to say for now, that I am a historian and amateur archeologist in Skagway, Alaska.
My studies have led me to some documents that are linked to your great-great grandfather, John D. Stewart, a prospector during the Alaskan Gold Rush.
Your great-great-grandfather arrived in Skagway in July of 1898 bearing a bag of gold weighing nearly fifteen pounds.
The gold was taken from him by two men that were part of Jefferson (Soapy) Smith’s gang of con men.
It was this theft that led to the demise of Soapy Smith in the infamous shootout on Juneau Wharf.
During the melee that followed Smith’s death, your great-great grandfather’s gold was never recovered and it was assumed that it had been hidden away by Slim-Jim Foster and John Bowers, the con artists that had taken it from him and who were arrested shortly afterward.
My studies and the documents that I have found have given me clues as to the whereabouts of your great-great grandfather’s gold.
You, of course, would be the rightful heir if the gold does indeed still exist.
The gold would be worth in excess of seventy-five thousand dollars in today’s market.
My interest is that of a scholar and should you be interested in joining me to locate your great-great-grandfather’s legacy, I would only ask for the rights to the story of the discovery and a modest sum to cover my expenses.
If I don’t receive a reply within a month, I will assume you have no interest in the venture and I will pursue other means to locate your great-great grandfather’s gold.

Mark stared at the letter for just a moment before wadding it up and throwing it across the kitchen.
“Well that’s a new one,” he said with disgust. “I wonder if this jerk is related to the Nigerian guy that keeps trying to send me money on the Internet?”

Amy retrieved the wadded-up letter and smoothed it out on the countertop.
“Is this true?” she asked. “I mean the part about your great-great-grandfather being a prospector in Alaska? I’ve never heard you talk about it.”
“I heard stories from my grandfather when I was a kid, but the old guy told a lot of tall tales. I guess I just figured that this was another one.”
“There’s a lot of detail here,” she said, reading the letter again.
“Amy!” he said sarcastically, “surely you don’t think there’s anything to this!”
“I don’t know, but I think it’s worth looking into. It wouldn’t cost anything to do some research of my own and he did give us a month to respond. Would it be okay with you if I did a little digging into your family’s history?”
“Knock yourself out!” 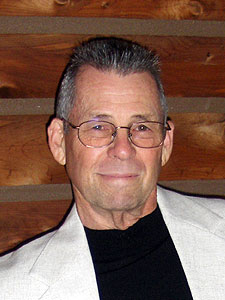 Award-winning author, Robert Thornhill, began writing at the age of sixty-six and in three short years has penned eleven novels in the Lady Justice mystery/comedy series, the seven volume Rainbow Road series of chapter books for children, a cookbook and a mini-autobiography.

Lady Justice and the Cruise Ship Murders, volume #11, is perfect for anyone that has taken a cruise or plans to.

At virtually every book signing event, Bob is approached by someone wanting to write a book of their own and asking how it’s done. Bob put together the story of his journey from retired realtor to the published author of twelve books in Tears and Triumphs of a New Author.

One of the basic premises of the Lady Justice novels is that life doesn’t end with retirement.

Walt Williams, the hero of the Lady Justice novels, decided at age 65 that he wanted to be a cop!

Robert holds a Master’s Degree in Psychology from the University of Missouri-Kansas City, but his wit and insight come from his varied occupations: stock boy, postman, truck driver, social worker, landlord, and finally to thirty years as a realtor, most of which as Broker/Manager of one of the largest real estate companies in Metropolitan Kansas City.

Bob is available for speaking engagements for book clubs and social groups, to discuss his books or how he started his writing career.

More fun stuff about the author