Writing Humor is difficult.  Besides developing the humor, these stories must have all the other elements of a non-humorous story.  To state it differently, a comedic story must have a protagonist, a plot problem, an antagonist and the humor.

A major part of the problem with writing humor is that humor is very subjective; what one reader sees as hilarious, another will view as stupid.  Thus, no matter how good a humor writer you are, you always have the disadvantage that many readers will think your stuff is dumb.  While this caveat applies to all writing, it is more pronounced with humor and satire. 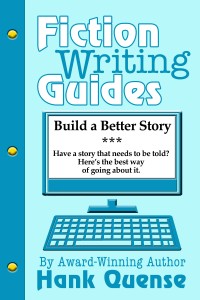 A mistake I see in many short stories, and one that occasionally I’m prone to make is a failure to tip off the reader early on that the story is humorous.  The author has to let the reader know this at the beginning of the story.  If the story starts off with a serious tone and then changes to a humorous one, the reader will get confused and many of them will get annoyed.  Just as annoying is a story that starts off humorous and then bogs down with a serious plot problem.  This happens frequently with movies. They start off hysterically funny and then degenerate into a more serious tone that has only a few smiles in the second half of the movie.

Character and plots
One of the ways I produce humor is through the characters and the plot.  The humor is produced by characters who have a mental flaw, one that prevents them from reacting the way normal people would react in a crisis.  The more bizarre the flaw, the more potential humor it can produce. If the reaction of a normal character would be to flee a situation, the comic character will stick around, curious about what will happen.

This flaw has to be deeply ingrained into the character’s psyche and be ready to go when the situation warrants.  It can’t be something that occurs haphazardly.

In Chasing Dreams, a novella in Tales From Gundarland

one of the major characters, Zarro, is a vigilante who is determined to free his town from perceived (by him) evil influences. His flaw is that he never asks the citizens if they wish to be freed from these influences and he is stunned at the end when the citizens threaten to riot if he doesn’t stop his vigilante activities.

In Falstaff’s Big Gamble, a Shakespearean spoof, one of the main characters, Hamlet, has such a flaw.  Here is my version of Hamlet’s famous soliloquy:

Hamlet paused, gazed at the multitudinous stars, sighed and continued his pacing.  A breeze brought the smells of the harbor: saltwater and rotting fish guts.  At last, he stopped, thrust one hand to the sky and declaimed, “To bee or not to bee?”  He stroked his chin.  “Whether ’tis nobler to buy honey from the peasant farmer in the market and thus provide him sustenance and income to support his brood of brats, possibly keeping him from rebelling over high taxes . . . or to grow my own honey thus gaining coins to assert my independence from my noble family and the sordid court?  Hmm.”

He paced some more, still troubled by his vexing question.  Nothing less than his future depended upon the answer.  Because his uncle, and now stepfather, Clodio, had usurped his right to rule the kingdom, he needed a profession and an income.

Hamlet’s passion for bees continues and shapes and influences his character throughout the novel.

Obsessions
Most of the classic humorous characters have an obsession.  This obsession leads the character to react in ways that normal (un-obsessed) people would never consider attempting because it is dangerous or life-threatening.  As an example of this type of obsession, consider the Pink Panther series of movies.  Inspector Clouseau believes he is the greatest detective in the world.  That is his obsession.  This obsession and the radically different opinions of his supervisor is what makes the comedy work.  As the world’s greatest detective, Clouseau can’t conceive that anything he does is wrong, no matter how bizarre.  That is another source of humor.

Similarly, the trick that changes a bigot into a comedic character is that the character doesn’t see his obsession (bigotry) so he comes across as a buffoon rather than a bigot: Archie Bunker for instance

As an example of how inexperienced writers attempt to write humor, consider this story I critiqued recently.  The sci-fi story had many characters, all of them under-developed with none of them assuming the role of the protagonist.  The antagonists were a vague group of Mars colonists and the so-called plot consisted of a series of loosely connected events with huge logical gaps in between the events ( like pulling a nuclear device of thin air and developing a tractor beam out of spare parts on the spur of the moment (by a florist)

The attempt at humor consisted of these disconnected rudiments combined with dialog filled with non-sequiturs and factitious comments. The obvious problem here is that the story contained none of the required elements such as protagonist, antagonist and a plot. The writer assumed no one would notice the omissions because of his jokes.

Deformities/disabilities
Humor doesn’t come from mocking a character’s disabilities or deformities.  A reader will see this as cruelty, not humor or comedy.  Humor comes from oddball behavior caused by bizarre inner characteristics in one or more of the story’s characters, not through their physical appearances.

Satire
Satire, while similar to humor, has different objectives.  Humor is aimed at making the reader laugh.  Satire is aimed at making the reader angry, although there may be a lot of laughs along the way. Satire can be very time-dependent and may not age well if it is aimed at a current situation or personality.  A work of satire that is pointed and skews a topical subject (such as a politician) will seem dated in a few years (or less) if the subject retires or dies.   However, a universal subject will still be relevant for a long time. An example of this type of satire is Joseph Heller’s Catch-22.  It is just as fresh and relevant today as it was when originally published fifty years ago.  That’s because the object of its ridicule, the military bureaucracy, hasn’t changed.  The Pentagon is just as stuffy and self-important as it was in World War II.  Another satiric novel with long legs is The Vertical Smile by Richard Condon.  This is perhaps the funniest book I’ve ever read and a devastating satire of modern society and religion and much more.

Omniscient point of view
This viewpoint is used frequently in humor to get snide remarks and witty observations into the story, but it isn’t used during the entire story.  Rather, the omniscient POV sections are interspersed throughout the work to emphasize the humor.  Frequently, these interruptions are used by the author to make cutting remarks on the characters, life, politicians or what else is relevant and skew-able in the story.

TV and movie humor
Another drastic mistake an author can make is to imitate the TV sit-coms unless the author is writing a script for one of them.  Some of the humor in these shows comes from the talent of the actors. More is generated by shouting or by using visual gags.  Shouting or yelling is not humorous by itself and becomes tedious quickly.

Visual gags and actor mugging are difficult to translate into written humor.  If you are serious about writing humor, I advise you to avoid watching TV sit-coms.

A different attempt by movie and TV to add humor is to have a character use insults or foul language at every opportunity.  This has a certain shock value initially, but it quickly grows stale and, after a short time, becomes irritating rather than humorous.

Conclusion
If you’re serious about writing humor and satire, an author has to work to perfect the writing skills involved.  This includes writing (and re-writing) his stories and reading humorous novels.  The two mentioned above, Catch-22 and The Vertical Smile are highly recommended for this purpose.

Some of this material was taken from his Build a Better Story. The book describes a process that eases the work involved in developing a story. This reduces the time spent in reworking flawed and imperfect drafts. Following the process allows more time to be spent on creative activities and shortens the time spent on less creative work.

Besides the process, Build a Better Story takes a unique approach to character building and plotting.  It identifies problem areas that inexperienced writers struggle with and explains how to address those problems including character motivation and scene design.