Every year without fail, I take the time to lose myself totally in the words of J.R.R Tolkien. First I re-read The Hobbit as if it was that very first time I picked up my copy of it, fifty plus years ago now. And then after a few days, once I have completed it, I take up The Lord of the Rings.

via my Kindle for PC application. Kindle’s saving grace from my point of view is that I can increase the size of the type, thereby making any book I have sitting there, easier to read. Plus, being able to read it on my laptop’s wide screen is a definite plus. 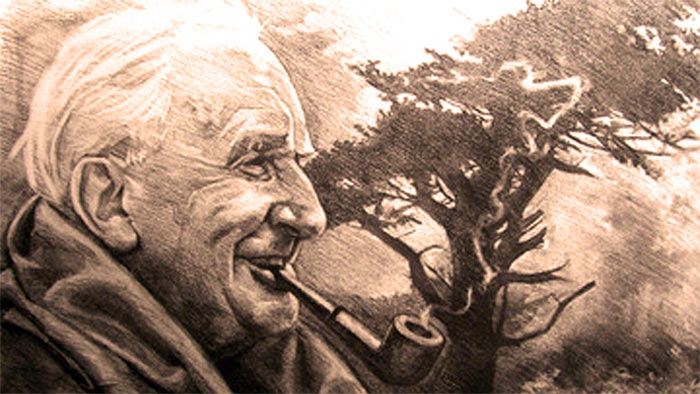 Being the devoted Tolkien fan that I am, I have several different copies, collected over the years, of both The Hobbit and The Lord of the Rings. My most treasured possessions are the two fully illustrated hardback copies of both which I possess. I read them both just once, careful not to mark them in any way or to break their backs, before putting them in my bookcase, never to be opened again in my lifetime. In years to come, after I’m dead, I hope and pray that whoever finds them at least treasures them as much as I do – did.

Until I began reading my Kindle version of The Hobbit, I didn’t realise that it is, in fact, produced just like the very first edition from the point of view of the language style. I had to reacquaint myself with J.R.R’s original Edwardian-like way of writing. Not a chore by any stretch of the imagination, at least not for me.

The later editions have been subjected to a more modern use of the English language by those whose job it is to prepare the many reprints for Tolkien’s millions of readers. Whether that is a good thing or not is up for debate.

Personally, I prefer the original. So much of what he had in his mind at the time of writing gets changed beyond recognition for the sake of ‘dumbing down’ for a modern readership. Reading one of the modern copies of either book, you lose so much of Tolkien’s original intent and magic.

, so I don’t know whether or not it is has been treated in the same way – taken from the original manuscripts of the three books which make it up. I can only hope and pray that it is in its original language form as J.R.R wrote it.

I have only one tiny gripe about my Kindle version of The Hobbit. Most of the drawings are turned on their side, forcing the reader to tilt their head to look upon them.