There is nothing worse than a woman’s scorn except if there are five women that you have dared to anger. Red Hats, Purple Outfits, sharp tongues, no holds barred and filled with revenge, these five women decide to take aim at one man for cheating on his wife. Meet Georgia, SuSu, Teeny, Linda and Diane the Red Hats and you definitely do not want to cross them.

As Georgia or George as only those close to her are allowed to call her enters a well known restaurant she is greeted by a surely waitress who learns what happens when you mess with her and her friends.  Georgia and her friends have a gossip filled, fun loving lunch, brunch and however long they stay meal until all is said and done. Allowing what they call Do Overs if someone says or does something wrong to restart the conversation and erase what is said, this wild and zany group will provide the reader with tons of laughter, tears and hilarity as I review The Red Hats by author Haywood Smith. 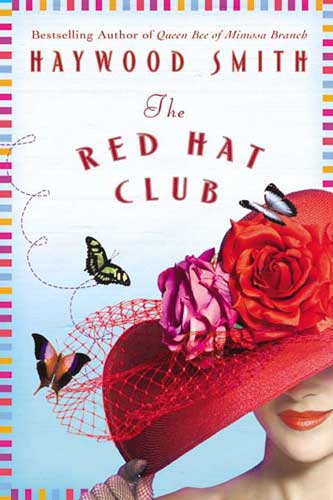 As we get to know these women and their back stories we learn about their pasts, how their tight friendships were created and the wild and zany things they did to join and pledge a sorority, meet guys and protect each other from harm. Teeny, SuSu, Linda Georgia and Diane will be friends forever as they forge ahead with a crazy plan to watch, tape, survey, blackmail and hopefully catch Harold in the act and much more.

Gathering their cameras, cell phone scanners, provisions to make sure they don’t go hungry, a van that even has two beds, their surveillance equipment and a wild and zany plan to capture one errant husband in action, get the goods on him to take him for what he is worth or not worth and hopefully come out ahead. Join these five great woman as you they take you back in time to the sixties where it all began, when they met joined forces and started this great club

Diane’s husband is cheating on her and their goal is to get the goods on him. How they do it and what they learn will teach any man never to take their little stay at home wife fore granted. But, there is much more this story. As Georgia, our narrator, relates her own story about an unrequited love with someone named Bradley, marrying an old but good and reliable John, wondering what would have happened if things had worked out differently, this books deals with mid-life issues not just for the men in their lives but for our Red Hats too. Using their rules or living by the code of their Twelve Traditions they were able to cement their friendships, relationships and overcome their teenage years, failed or successful marriages, kids and much more. So, SuSu is really great and never whines just takes action. Teeny is quiet and keeps things to herself until you learn the truth about what she has been harboring inside for many years. Georgia is still thinking about Bradley and tons of what ifs bored with John and her marriage. Diane has to deal with a cheating husband and getting revenge which is definitely so sweet and the only way to go and of course Linda whose marriage appears to be the only one that is solid.

Events that make their husbands cringe. Socializing that would have been fun when younger and not at the present. Five women who withstand their husband’s transgressions, gripes, deal with their own flaws and are absolutely so funny and filled with gossip as you learn how Diane becomes a computer geek, gets the goods on Harold and what happens will keep you laughing and in stitches. Mademoiselles in the sixties turning into the Red Hats of the 2000’s and much more. So, which one the twelve traditions would you like to invoke? Of course since they are considered Sacred and Secret and only for the eyes and hears of members you I cannot divulge too much about them nor will I because you need to read Chapter 8 for yourself to find out what they are, memorize them and adapt them with your own Red Hats or group of friends. Just how far will they go to make Harold pay for cheating his investors, fraud and much more? Just what would they do to celebrate Diane’s freedom? When the past comes back into her present what will Georgia do? When all of the blanks are finally filled in will she stay with John? What exactly did Teeny plan for the Red Hats that would change their lives? The surprises keep coming and the truth about Teeny and her past revealed. You won’t believe how she sticks it to abusive husband and his family. An ending that will make you stand up and cheer for all five of our great Red Hats as they take center stage in this hilarious yet heartwarming novel of friendship, loyalty, love, trust and just plain fun.

Characters that hilarious, smart, and definitely far better than the First Wives’ Club or Nine to Five. Revenge is sweet and the Red Hats have much more in store for readers.

Trailer: The Mosaic of the Broken Soul

Joyce White Dec 11, 2012 1
Write and Read Poetry Genuine poetry can communicate before it is understood, the unknown healing all wounds of…
Writing