For my second book review attempt I chose another series by a well heard of and much loved and hated writer: Stephenie Meyer.  I have not seen as many negative reviews about this series, but it does seem to be one that people certainly love to hate.

With so many rabidly negative comments popping up randomly online and out of peoples’ mouths about both the writer and the series since the first book came out, a series that had once again made a big splash and created a glut of envy over all the attention the author was getting, my interest was piqued.  Despite not finding anyone who actually LIKED the books, they were selling like hotcakes.  But then again, maybe I just don’t know enough of the right people.

Naturally, I had to find out what all the fuss was about, so I went out and bought the first book.

When I read Stephenie Meyer’s Twilight it went down surprisingly fast, like a plate of spaghetti when you didn’t even think you were hungry. 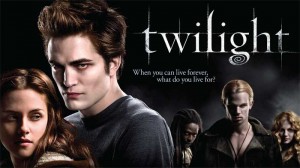 It’s not that the book was particularly gripping or fast paced.  It’s not.  I burned through the pages with amazing speed because it was such an easy read.  But it was easy in a natural way, not stilted like many other overly simply written books.  Before I knew it, I had finished the book and was looking for something else to read.

I suspect this is why so many people don’t like the book.

The plot is fairly simple, without many intricate plot twists.  The characters are transparent, their motives and feelings all too easily slipping through while they run about brashly acting without proper thought.  Sometimes the characters behave with some responsibility and maturity; often they behave with reckless immaturity.  But of course they do, the characters are all teenagers, and even many adults act the same way at times.

With the straight-forward plot and sometimes bratty characters all rolled into pages of simple writing, this book is not going to be a great read for people like me who have been reading novels for decades.  And it’s all people like me who I’ve come across complaining about the series.

But, do you know what?  The Twilight books were not written for middle-aged wives.  I would have to compare the complaints I’ve heard about these books to my seven year old complaining that Alyssa Satin Capucilli’s Biscuit books are too boring.  Well, of course they’re boring – they’re not written for seven year olds who have started reading their first chapter books.  Biscuit is for kids like her younger sister who are just learning to read; her sister who, by the way, absolutely loves the Biscuit books.  The Twilight series is written about teenagers for teenagers.

I went on to buy and read the other books of the Twilight series out of curiosity, and because I had to find out who gets the girl.

The main characters in the series are all teenagers, behaving in the usual rash teenager fashion.

Bella Swan is a teenager who is dissatisfied with the changes in her life brought on by her mother’s focus changing to revolve more around her new husband than her daughter.  Like any other moody teenager, the first response is to sulk off into the corner – she goes to live with her father, who is a stranger to both her and to parenting.

With an independent teenage daughter so close to adulthood who he doesn’t know, and knowing nothing about how to be her dad, Charlie Swan seems content to give Bella her freedom.  He passively lets her exert her need to nurture someone on him, while Bella convinces herself Charlie could not possibly survive without her feeding and taking care of him despite the fact he had done so just fine for many decades already.  Charlie steps in to exert his parental control only when necessary, after things seem to be getting too rough for Bella’s mental well-being.

This series has the typical elements of a romance.  Our heroine Bella is a young and naive girl who finds herself torn between two loves and tormented by her desire for the typical bad boy.  In this case both of her suitors seem to be the bad boy.  The main difference is that while one relentlessly pursues the girl, making his desires clear every chance he has and exhibiting a protectiveness that combines her well-being with his own selfish need for her; the other suitor is the typical romance novel jerk.  He is outright rude to Bella at times, constantly pushing her away and telling her why they can’t be together, and yet he always seems to be right there to make her feel miserable.  He just can’t seem to leave her alone.

Being a romance novel heroine, Bella has no choice.  She falls hard for the more bad of the two bad boys.  The worse he treats her, the more he pushes her away and turns her into an emotional wreck with his self-centered behavior and selfish emotional games, the more Bella is pulled by the need to be with him.  The other suitor doesn’t seem to know how the romance novel game is played.    His every expression of love, promise to always look after her, and show of abject devotion, seem to only push her further into the arms of his rival who is more than willing to take her despite his behavior that implies the opposite.

Bella’s main goal is to be with Edward Cullen, a vampire of dubious character quality who I suspect is just as emotionally and developmentally trapped forever at the same tender age of seventeen as his body is, and has been for more than a hundred years.  Of course, it makes perfect sense that if the body is frozen at seventeen years old and unable to age, the same would apply to the physical development and maturity of the brain and teenaged hormones, physical changes that come with aging.  No wonder he’s so moody and self-centered!  He’s been playing the same teenaged game for longer than most people spend an entire lifetime of birth, growing, maturing and withering into old age.

Edward’s rival, Jacob Black, is hopelessly in love with Bella.  In fact, he is so much in love with her that he is willing to stand aside and let her be with his rival if she thinks that is what will make her happy.  Of course this causes him great torment, watching Bella suffer emotionally at the hands of Edward’s selfish moodiness, especially when everyone except Bella and Edward’s family seems to see what a louse Edward is.

Of course, during this I (the reader) am smacking my head and swearing at the little ninny for being so naive and mindlessly chasing after the abusive treatment of the more bad boy when she could have the other guy, the other one she also loves and who genuinely cares for her and isn’t purposely making her unhappy and an emotionally scarred mess.

This is one of the points I dislike the most about all romance novels.  While it is necessary to build tension and throw obstacles in the way of love, does it always have to be in the form of the more mature man who is acting like an immature buffoon, abusive, mean and nasty to the naive young woman, making her fall hopelessly and desperately in love with him through his abuse and cruelty?  Must the girl always defer to his rather dubious maturity, while she herself behaves with a much greater level of it, all while he treats her worse than a pile of cow dung he might have accidentally stepped in?  Must romance novel heroines always be drawn with an uncontrollable lust and yearning for love only towards men who make them miserable and treat them badly?

In this case, our heroine does have a choice.  She is drawn to both men (more boys than men really).  She even seems to sometimes be more drawn to Jacob, giving us hope that she may wise up and choose happiness instead of confused hormones.  The love triangle twists and teases, with Edward and Jacob forced to make an unlikely allegiance for the sake of Bella despite their mutual rivalry and dislike of each other.

This is one of very few series I have read that were what I would consider an actual series.  Most series have a feel as though the subsequent books are an afterthought, like a hit movie where the writer, director, actors, and everyone else put everything into making that one movie, and then years later are told to do a sequel.  The sequel is seldom more than a lesser quality remake of the first movie.  The Twilight saga is a true series, each book following easily on the heels of the one before to continue the drama of Bella’s life.  Meyer’s did a great job of keeping the story feeling the same from one book to the next, carrying the momentum of the drama across covers, so that it felt more like reading one long book instead of individual books months apart.

While I would suggest that anyone older than thirty, and anyone younger with more mature literary tastes, might want to find a more mature read, I think Stephenie Meyer hit it dead on for her target audience.  It is an easy enough read with a simple plot that has enough twists to keep a young mind questioning and interested in the story.

I won’t reveal who gets the girl, for those who haven’t read the whole saga yet, but I’m sure it’s pretty clear from my review that I was rooting for Jacob Black right from the start.

Face it girls, there is no happily ever after with the Edward Cullen’s of the real world.

DianeWylie Apr 22, 2016 0
The Mayan civilization captured the attention of some folks recently with the “end-of-the-world” predictions caused…
Society