How dangerous can it be to deliver furniture? Hector Mendez learns the hard way about just how dangerous it can be? An extra 200 dollars in his pocket would go a long way. Trust is often overrated when you are blindsided.

Money becomes paramount and all too often we do not see the inner truth behind a person’s real motive until it is too late. Taking the job and bringing the truck to the destination requested by the man who hired him, Hector arrived at the Tropical Fiesta Hotel as requested and found his way to the dock to unload the furniture. But, the events that happen whether in slow motion or fast will shake up the world, awaken their complacency and let everyone know that terrorism can occur and an attack on our soil equal if not worse than 9/11 can happen at any time. When Hector tries to expedite matters and opens the back of the truck with the required key what happens will create a chain reaction of carnage, fear, destruction and violence that will do more than just annihilate people and crumble the hotel. Internal Security by author David Darracott don’t miss my review and definitely read the book. 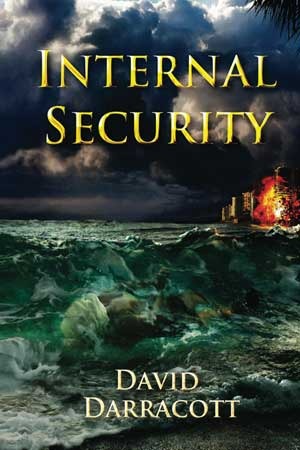 The news often brings out reporters who provide the public with fluff, flare and the mundane as the author so aptly states. Defining it as “pseudo news,” to fill the airwaves and entertain the listener. Tom Darden works for a third rate news network and learns about the explosion. Hoping to rise above his station in the news business he chances using his press credentials to get him closer to the scene. At first glance he thinks it might be just an ordinary explosion with a closer look and more discerning eye he realizes the there is much more to this than the eye can see.

The author graphically describes the burned bodies, charred tree stumps, melted street signs, the stench of burned plastic, woo, cloth and the chemicals that permeate in the hot, stick and balmy air that create an odor that will take more than your breath away. Pieces of torn clothing stained in blood as well as stained suntan oil provide the backdrop for a canvas if painted by an artist would bring to light a scene that many would not want to see. Rethinking about his decision to come face to face with this scene Tom begins to think about his true motives for doing this and is brought out of his reverie when stopped by the police and questioned.

Dr. Josiah Baines has a vision that he wants to present to a group called the Wise Men. A vision that will enhance pockets of the wealthy and deplete those who are not. A vision that will take away many civil liberties we all enjoy but require the American people to allow themselves to be controlled or brought under control as many races were. Subjugation, enslavement what exactly was his motive and his plan? Peyton Marshal a former Admiral and advocate of this plan and a powerful Senate Committee Chairman died after this meeting. Peyton thought to have a heart attack and the committee member an accident. Why did they die and why did the Wise Men turn down the plan?

But, what happens next will surprise the reader as Dr. Josiah Baines is approached by someone we will call the Great Man, given the resources necessary and the authority to implement his Master Plan to create a better security plan for our country. Just what this Master Plan is has yet to be revealed? Why would it cost the American Taxpayer? Why is the government willing to go along with this? But, when he presents the truth to his editor instead of realizing that he created a great story he sends him to Iraq to cover the war and what happens there will really enlighten the reader. When he witnesses a murder and bombing, takes pictures of the incident instead of appreciating his efforts he’s questioned by the military, treated as an outcast and the photos he took are stolen as someone left the camera minus the memory stick. But, Tom is resourceful and what he does let’s you know that he will stop at nothing to get what he wants and his story out there. Tortured, mistreated by those he’s supposed to trust he never gives up.

What would happen if the government decided to turn the United States into a police state filled with detention and concentration camps, detainees, inhumane treatment and liberties denied? As Tom investigates more finds himself embroiled in this plot just how will this all end and will those at the top of our government win or will his story break this wide open? Militia groups to arrest innocent people that come up on their computers as terrorists. As Tom and a man named Arvin Webber seek the answers there are others that claim they are doing this to enhance the Internal Security of our country and mend the breach of security the claim exists. Just how high up does this go and what happens to those involved and to Tom? You won’t believe the ending and you have to read this book. One man who risked it all for his beliefs and his country. Internal Security: What’s your definition?