What do you get when you cross a stand-up comic and aliens who look like they stepped out from your TV screen, of the fifties?

You get a delightful tale that begins with laughs galore, courtesy of resident funny man, Sam E, and brings you on a roller-coaster adventure ride of the sublime and the ridiculous, expertly weaved into a tale of heroism and finding peace with the past.

Die Laughing is a brilliant first novel by Louis K. Lowy that will have you clamoring for more. 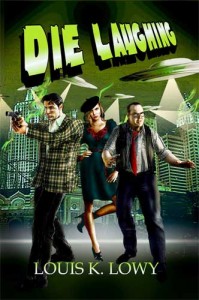 If you want to know how to capture an audience in the first chapter, this is it. It certainly drew me in with its effortless humor and period details that sticks you in the seat of a smoky lounge while the stage lights focus on Sam. And the moment he tells his first joke and gives his first zing, you’re hooked.

For the first quarter of the book, as Lowy deftly unfolds his vision of a nostalgic world and slowly turns it upside down, it’s a fun and engaging ride. I could not put it down.

Just when you think you have things figured out and know how it’s going down, Howdy Doody appears and things get even more interesting. Comics become heroes, villains become even more villainous… This is why minions should always be kept in their place, and with the lid firmly on.

The heroine with the monicker of Cricket, and a skeptical comic-book artist join Sam on his quest to save the world from aliens who could really use a better agent.

After the fantastic start, the middle of the book does drag a bit as our heroes flounder around before finding their mojo, and a plan. But it’s only slow in comparison to the face-paced punch lines and action of the rest of the novel. It is cleverly done and the characters acquire additional layers of complexity that make them more real before the adventurous charge to the end, and rush it does, as Sam and Co. race to save the world, and Sam’s career.

The book does much better when it doesn’t forget its humor, and there is a lot of mirth here, from Sam’s desperate off-the-cuff jokes, which is the hero at his most human and best, through it’s homage to old Sci-Fi tropes and B-movies, turned a bit side-ways.

I didn’t expect the ending until we got there, a touching, fitting ending, but I won’t give it away. In a way, the final scene was what the book was really about beyond the zany adventure, it’s about being human and finding peace at last as the curtain draws aside.

Die Laughing is an excellent debut novel and I look forward to more from this author.

Check out the trailer for Die Laughing.