Bobo and his friends enjoy racing in the Pocono 500 race on the Tricky Triangle every year. Each car is special and each driver his own unique way of racing and prepping his car for the event.

But, one thing rings true for this group of cars, Bobo, Saber, Big Foot and Justin is that they are all good friends. Whether preparing for a race or just going around the track several times, these racecars do it for the win but more for the fun of competing together. But, one peaceful morning while Bobo was just lounging around things would change, as someone knew comes on the horizon or racetrack and friendships would be tested and loyalties renewed. 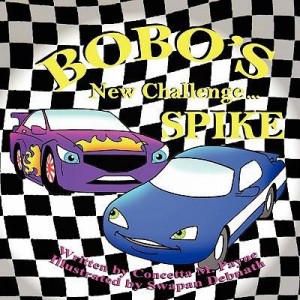 As Bobo was relaxing an old friend called him saying he was going to the track? Congratulating Bobo on his win at the track, Justin was excited to see his old and dear friend again. But, when they arrived at the track something would change. Big Foot, Gater, and Saber were all there talking to a new and shiny car named Spike. Spike had confidence, was deep purple in color and thought a lot of himself. Well, I will let him tell you himself.

“ I’m Spike, and I am probably the coolest and sleekest car on this track. I am deep purple with gold designs all over my great body. I intend to race in the Tricky Triangle and beat the competition at all cost. I just met Bobo and Justin and now I know what needs to be done. No, problem. ! They might have the trophies now but I will have it on my shiny bumper by the end of the race.”

As you can tell he is really full of himself and has quite an attitude problem. But, things got worse as they cars gathered at the track to practice and what happens really frightened not only Bobo but Justin and the rest of the other cars too. First, Spike tapped Big Foot’s bumper and then set his aim at Bobo. What happens next you won’t believe and the guys have to take matters into their own wheels you might say in order to make sure no one gets hurt. There were too many close calls and someone would definitely get seriously injured if they don’t talk to Spike and find out what the real deal is and how to stop him before things get worse.

As they talk with Spike and he hears what they are saying he has to decide whether to apologize for his rudeness and dangerous actions or take it even further. What he does and how the race ends you will have to learn for yourself. Once again the finish line does not always belong to the one car that thinks he might win. But, there is much more to this story as the race starts the cars line up and the end will surprise not only the reader but the cars too. What will Spike do during the race? Will he try to crash into the other cars or will something happen during the race that will change everything for him and everyone else?

But, when the race is over, the winner crowned and the trophy awarded something happens that makes our blue  Bobo blush. Meet Angie one hot pink car who is a total fan of Bobo. She loves racing and she definitely just might like our cute blue racecar too. But, will they race or do some laps around the track together? Only author Concetta Payne knows the answer to that question when we hope she writes the next in many Bobo Racecar Books.

This book definitely teaches children good sportsmanship, friendship, car safety and understanding that being rude is not the way to go if you want to make friends. Kids of all ages will love Bobo and readers will feel the excitement as the cars line up, the race starts and the suspense builds as Bobo, Justin, Spike, Big Foot and Saber race to the finish line. Who wins, who loses and who gets knocked out? Find out for yourself when you read this FIVE CAR BOOK: ONE BLUE: ONE PURPLE: ONE GREEN: ONE YELLOW : ONE: BLACK.

The illustrations are not only colorful but realistic and lifelike as you see the cars go around the track, the excitement of the spectators in the stands and the finish line with the winner taking all.