Are you one of those annoying individuals who always read the last few pages of a book to see how it turns out? Then this article is written just for you.

For my part, I far prefer not to know the ending. Instead, I want to find out what happens next in any story I read. That applies doubly so when I’m the one writing it. Part of the fun is being the first person to read the story as it unfolds from your mind. 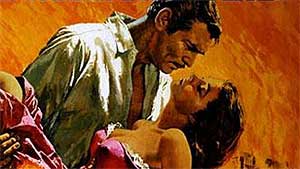 As far as I’m concerned there are several drawbacks to writing the last chapter first. The chief one being that once you have written it you must not deviate from the path governed by the ending.

For instance, you cannot employ any form of surprise twist at the end. However, you can inject red herrings. You can flesh out various parts of the story leading up to the ending, but that’s about it. It strikes me as being an extremely restrictive way of writing.

It’s interesting to note that the authors mentioned in the article, such as Margaret Mitchell who wrote Gone with the Wind, are not universally remembered for more than one book.

Could you think of another book written by her that everyone knows the title of? I can’t. But at the time, her book sold in the millions, plus it became an epic film. Those were the days when publishers promoted a book, unlike today.

Thank goodness that the great majority of writers do not follow the practice mentioned in the article. Plus these days with the eBook becoming more prevalent, its impossible to read the ending as the most you get are the first few pages using the Look Inside option, which probably explains why eBook sales here in the United Kingdom, a nation of paper and hardback lovers, pale in comparison to the much more enlightened readers in the United States.

The same can be said for France, Spain, Germany, Italy, Japan, India and Brazil. Opening online sites in non-English speaking countries like those I’ve just mentioned in an attempt to expand eBook sales is wildly optimistic on the part of companies like Amazon. Even Canada still prefers paperbacks to eBooks. But that’s another story…

Yezall Apr 19, 2012 5
Indie Writers - A Secret Brotherhood There is a not-so-secret brotherhood of writers called INDIES.  We are a…
Featured