Over Her Dead Body

Just how far would you go to keep your man? To what lengths would an over the hill, used up pushing forty year old due to keep her hot 84 year old husband of more than 20 years?

After all he is rich, gives her all the perks she wants and for that she keeps him relatively happy if you know what I mean. So, why would she be jealous of an octogenarian old woman who is friends with her husband?

Ethel Peterson had an untimely death. Well, not really she had some help. Someone came into her apartment and beat her over the head with a bat. From the prologue of the story we learn that someone was paid one million dollars to rid the world of this lovely lady. But, just who and why remains to be seen. From the talented author of Dead On Arrival where our main character Laura comes home and finds a dead coworker in her living room comes another hilarious murder filled with twists, mayhem, wild and zany characters and two building supers that play sleuth to help solve the case. Once again author Karen Vaughan delivers a first rate mystery. 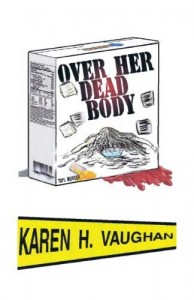 Ethel is gone but her family does not seem to care. Or do they? Coming to see her affects and check out what needs to be done, her niece Adrianna shows no emotion and just wants to be done with anything related to poor Ethel. Laura is more than upset at this girls unacceptable behavior and can’t imagine why she treated the incident and Ethel like yesterday’s trash. But, there is much more as we meet Sanford Brown who has a special interest in this case and who adored Ethel. Well, wife Leena who is tons years his junior, does not like and did not like the relationship and who will do anything to keep her rich sugar daddy. But, would she commit murder?

Just as Laura and her live in boyfriend Gerry begin cleaning out apartments, dealing with Ethel’s death several incidents happen letting the reader know that someone is not happy that she is snooping around and someone just might get hurt. Her car is vandalized, her boyfriend is injured and someone on the phone verbally threatens her but she thinks she knows who that might be. Added to that to make matters even worse her ex-husband is hired by the owners of the restaurant where she works as the cook. Dealing with that and much more Laura surely needs more than just a hug from Gerry and support from her friends and family. So, what will happen when wife Leena learns that Sandy is about to try and cut her loose? What will be the killer’s next move?

Things get complicated as Gerry is injured, Laurie’s car is vandalized, Sandy is shot and one loony tune wife is on the run or just out there causing more havoc than she is worth. Let’s not forget sister Jackie who has issues with Leena of her own. Added to that Jackie and her father are definitely two of a kind and have a borderline personality that tips in the wrong direction when crossed. Did Leena pay someone with her father’s money to off poor Ethel? Just how far would this lunatic go before more bodies are found?

If Laura did not have enough trouble she relates to the reader how her ex-husband is having trouble with his parents and his new boyfriend who is pressuring him to make a permanent commitment. Sandy relates how Leena followed him to the Senior Center and demanded his drop poor Ethel? Poor Detective Gibbons never knew what hit him when Laura came to live in his town and poor Gerry is getting fed up with her playing amateur detective. Poor Laura can’t seem to win and she is getting it from all sides. Added to that a star witness is murdered, the sister needs protection, security has to be beefed up at Sandy’s and Laura now needs a police escort. What will happen next? When will the nightmare be over and will they ever be able to prove who killed Ethel and why?

Then Laura and Jackie are kidnapped and taken to stand trial. Wait until you find out who the judge is. Threatening to shoot jurors, kill Laura and Jackie will anyone find them before it’s too late? With an ending that will keep you guessing, laughing and definitely in suspense author Karen Vaughn once again delivers a wild and zany mystery with characters that are so unique and different you hope they come back for more. Will poor Laura ever go home and not find herself smack dab in the middle of a murder? Will they remain where they are or will they decide to move? Will Gerry and Laura ever tie the knot? What happens to Leena will endear you not only to the police department but to Sandy, Laura, Jackie and of course Gerry in more ways than one. What happens when a woman decides no one is going to take her man? What really happened to Ethel and how many people were involved in her murder?

That is something I promised Gerry, Laura and Office Gibbons I would never divulge. After all: They still have to bring the culprit to trial. What is next for Laura and Gerry? Let’s hope author Karen Vaughan has more mysteries, plots, murders and excitement in store for our two favorite supers, amateur sleuth and of course readers. What happens at the end to prove that Adrianna might not be so cold and that she just might have loved her aunt? Find out for yourself when you read this great book.

Let’s dedicate this review to Ethel Robinson and Sandy.