Would you like the Queen of England as a house guest? I am totally serious. Would you take care of her and act as her own personal maid or even confidant?

What if I told you she arrived in the 21st century from the 16th by way of time travel? Would you believe me? What if I told you she wound up going from England to Australia and arriving in an odd place and hoping to return and retake her throne? What will happen if Queen Elizabeth I decides to remain here or cannot get back? Will Spain overturn her regime? Will her minions rebel? Out of Time by author Lesley Dimmick brings to light these issues and many more as I review this book.

Meet Lindsay ap Rhys ap Gruffud and Meg Dawson who are just trying to chill out, have a peaceful day and enjoy a beer. But, what happens will definitely add more than just some excitement.

Imagine wanting to go for a ride on your favorite horse, get some fresh air and take a break from the drudgery of paperwork and the responsibility of being the Queen of England and have a ride. Appointing and choosing her attendants to go along, deciding with the help of the Earl where to go, she sets out to ride to the Rolling Stones. But, will this be safe? These stones as the author relates are thought to be made up of a “bewitched band of an ancient king’s men.” Would you chance going there? Would you want to join these men of stone? When the Earl suggests this route the Queen agrees and things this will prove fun but instead and the end result is quite different. 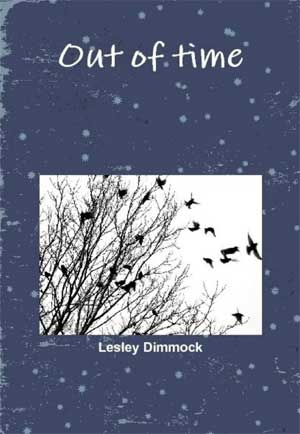 As Elizabeth rides an accident befalls her causing her to not only hit her head and fall off the horse but when she awakens she finds herself somewhere she has never been. You got it! Poor Queen Elizabeth I is about to meet Lindsay and Meg as she manages to land in Lindsay’s garden and what happens next is short of a comedy on television. As she and the reader fast-forwards to the present what will her fate be? When her attendants look around after her fall they have no idea where she is and that is where the real problem lies and the mystery begins?

Angry, startled, annoyed and slightly shaken up the Queen quickly takes control of the situation and the two girls too. Ordering people about is what she is used to and how she gets these two to be her own personal maids you have to read for yourself. This is one clever Queen but Lindsay and Meg are quite smart too as they use Google to search for information about the Queen, enlighten her about some of her past and hope to find the solution to returning her back where she belongs. But, how they go about it is quite unique and where they start is with a librarian but not before Meg brings the Queen some proper apparel to wear, a true Australian breakfast, and more. But, the Queen is worried that Spain will try and overtake her Empire before she returns. But, when Meg decides to share what she knows with someone else Lindsay becomes concerned. Imagine seeing cars and buses for the first time and riding on one. Everything looked massive to her and quite startling but she is the Queen as she states and will not be intimated or frightened as she continues on the journey to meet the one person Meg says can help them.

But, let’s return and learn something about what is happening while Elizabeth is away and what the Duke of Norfolk has planned. Securing the Rolling Stones and wanting to take over the throne himself he will do everything to block her reentry into the past and stop Spain from overthrowing the regime.

With the help of librarian Kate Spencer and the Queen they decide to look for a spot that might resemble the same one where the Queen fell and go from there. As Elizabeth I recounts the place and its appearance Kate remembers that there is a mountain and area that might be where to start. Hoping that the towers would transmit some kind of force that would help them leaning towards the television towers was their first choice. The situation lightens up as the take the Queen on a shopping spree in town where she becomes enthralled with the jewelry display and totally in love with the chocolate delights. But, when she disappears again poor Lindsay has not idea where she is until she turns up and tells her why. The humor is huge and the situations quite comical in this book and the attraction between Lindsay and Kate quite strong.

But, when they finally get to Hunting Rock the antics that the author shares will definitely endear you to our dear Queen for she is wise, smart but quite enterprising too. Needing money she does something her subjects might not agree with and definitely intends to earn her keep. But, back in the 16th century dear old Norfolk has other plans for the Queen and wants to make sure that she never returns. If she remains where she is he will take over the throne and everyone will be under the Catholic Church. But, when Norfolk takes his sword and turns it on one of the stones what happens to him will certainly surprise not only Norfolk but Dudley too. Loyal to the Queen Dudley will make sure that Norfolk’s plan never succeeds. But, will he foil it in time and will the Queen return before everyone runs Out of Time?

But, what happens to the Queen and Norfolk you will have to read for yourself. Did she return in time to save the Kingdom? Did Elizabeth learn the truth about Norfolk? What is the end result for England and where will this take her next? What will she do with what she learned in the future in the past? What if anything will happen between Kate and Lindsay? Interesting story filled with humor, funny antics, loyalty, friendships old and new beginning and a cute story that has room for a sequel if you want to bring back more characters from the past and insert some historical events as the author did in this one. Would you like the Queen of England as a houseguest? Read this and decide for yourself.

Caryl McAdoo Apr 12, 2021 2
Landmines and Pitfalls Okay, so from my previous offerings, you know where to open your curtain and whose Point…
Publishing