How Do You Like Your Man – With or Without Hunk?

– but let’s just say – there are always lots of studs to be had. As is the case with many romances – gay or otherwise – the heroes tend to be hunky, muscle-bound sex gods with abs so firm, you could bounce a coin off of them. Hey, there’s nothing wrong with that right? 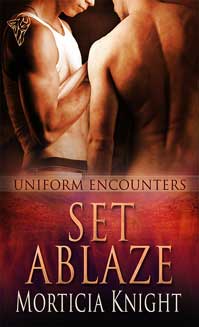 Of course not. In the same way that straight men fantasize about hot chicks, women and gay men dream of the perfect male specimen. But who is the judge of what the ideal man might look like? That’s impossible of course. One man – or woman’s – hunk, is another’s reject. This is one of my favourite conversations I have with my best friend who is gay. We’ll watch a film and then argue over whether or not we would do this guy or that guy. The comments go something like this:

“Are you kidding me? Look at that ass!”

It doesn’t really matter which one of us said what; the phrases tend to be similar. When I began writing the Uniform Encounters series, I chose to highlight professions that featured men in uniform. There are firemen, a detective, doctor, and paramedic. It is a three book series, and each book takes place in the same town but features different pairs of men finding one another and figuring out if they can make love last. Since I was writing about three different couples within the same series, I had to be very clear on not only the emotional and psychological characteristics of my boys, but they also needed to be distinctly different in their physical characteristics. This is where my best friend came in again.

Through conversations with him, and stories about his friends, I have heard of every sort of man that each guy prefers. Everyone really does have their own type or group of types. Some people prefer a tall and lean physique, but others like a muscle-bound hunk. Some love the idea of long hair on a man, while others see it as a turn-off. For some, it’s all about the eyes, and for others, it’s the smile. I wanted each of my men to stand out in their own unique way so that readers could immerse themselves in completely different men with each story.

The most recent installment in the series, Arresting Behaviour, revolves around a Hispanic homicide detective that has the most adorable dimple when he smiles. He sees a photo of their number one suspect in a string of recent murders – a Native American artist – and is in lust with the long-haired brawny man. Together, they go after the serial killer that is threatening their city of Mesa, Arizona. They also discover along the way that opposites really do attract.

What’s my type you may wonder? I’ll give you a hint: I love all of them! That makes my job of writing about all sorts of men in all walks of life a real dream come true.