“Football Wife: Coming of Age with the NFL as Mrs. Karl Kassulke” is an exceptional example of just such an autobiography. Jan Adams sometimes brutally candid memoir is a superbly written account by an extraordinary woman in her own right. 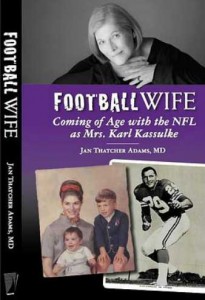 Adams had a twenty-five year career as a physician who in the 1990s accompanied Dr. Patch Adams on a tour through Russian hospitals, orphanages, nursing homes, refugee camps, and more. Perhaps her crowning professional achievement was founding Maria’s Children International, a nonprofit organization dedicated to providing art supports and funding to more than 600 Russian orphans, as well as similar projects in Mexico.

But while her professional career was exemplary, her marriage to Viking NFL player Karl Kassulke (whom she met playing ‘powderpuff’ football) was not. “Football Wife” is a story that incorporates drug abuse, alcoholism, marital infidelity, the impact of the cult of personality. It is also a personal history of a series of medical problems that began when Adams suffered a head injury in a traffic accident in 1985; spinal problems and a paralyzed leg in 2002; an undiagnosed severe illness in Russia in 2007 only to be followed by a diagnosis of cancer later that same year; reconstructive foot surgery in 2010; and the necessity of a pacemaker installed in 2011.

In “Football Wife” the reader is informed of the good times and the bad times, it is an remarkable account of struggle, failure, and ultimate redemption. A gripping read from beginning to end, “Football Wife” is deftly written, keenly insightful, occasionally inspiring, the singular life of a singular woman, and especially recommended reading for anyone struggling with familial issues complicated by medical traumas, and impacted by celebrity, success, and the siren call of hubris.

Jan Thatcher Adams, MD, was born in Huron, SD, grew up in Iowa, and settled in Minneapolis when, at the age of 18, she married football hero Minnesota Vikings Karl Kassulke. Her book details the years of that celebrity marriage, while Karl excelled at football, becoming all-pro, and Jan finished her undergraduate degree, had two sons, and went on to finish medical school. After their divorce, Karl, who was clearly suffering from the syndrome of repeated concussions, had a motorcycle accident and was paralyzed. Jan practiced in family practice and urgent care for 35 years, published hundreds of articles, raised her sons, experienced the usual setbacks life provides, played church organ for 35 years, and founded charities. She clowned in Russia for years with Dr. Patch adams, where she met her current husband, actor Dmitri gerasimenko. A vicious bout with cancer laid her low for 4 years, but she is now back at practicing medicine. She lives in the Minneapolis, MN and Port Angeles, WA area with her husband and 3 cats.