Where no counsel is, the people fall, but in the multitude of counselors there is safety.” – Proverbs XI/14 … Mossad motto

What if there is no safety? What if the person meant to provide counsel acts alone, bringing the United States to the edge of war with Iran, supposedly to protect Israel’s security?

That is exactly what Namir Bethan, Director of Metsada does. The United Nations and America are sitting on their hands while Iran expands its nuclear program. The Kadima Party coalition government is pursuing appeasement, unwilling to do the correct thing – bomb Iran’s nuclear facilities like they did with Osirak. Matan Irian, a former Army Colonel, presents a devastatingly simple plan: sabotage a refinery complex in Texas City, plant evidence that incriminates Iran, and sit back while an enraged United States strikes back in retaliation.

The plan is meticulously executed and the President positions two carrier battle groups off Iran’s coast in readiness to hit back. But Matan Irian makes one small mistake, his team leaves behind a tiny piece of evidence which the FBI forensic investigator traces back to Israel. The President’s rage is now turned on his ally and demands that Israel finally acts to recognize the Palestinian’s right to exist in a State of their own. The Israeli Prime Minister rejects the American demands as naive and simplistic. When the President withdraws all economic and military aid, the Israeli government falls. Israel is faced with a cruel choice: seek peace with the Palestinians or maintain an untenable war – alone.

Reviewed by Fiona Ingram for ReadersFavorite.com  ***** 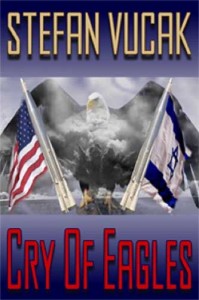 This is a great read, a real page-turner. The author lays bare the deep-rooted hatreds, as well as tribal rivalries that dog the composition of the Middle East, and preclude a possible resolution. From the start, the author draws the reader into a world where modern and historical animosities are twisted together in a knot that seems impossible to untangle. The actions of two men, Namir Bethan (Director of Metsada) and Matan Irian, the man who proposes a drastic solution to the nuclear terrors that threaten his county, cut this Gordian Knot.

The author draws on current events, such as international fears of a nuclear-capable Iran ready to hit the red button at any time, to the natural anxieties of the USA bigwigs, to the defiant and entrenched recalcitrant attitudes of the Israelis towards any attempt at removing what they perceive to be their God-given rights.

The author also eases the unversed reader into the technical and forensic aspects of explosives and armaments, as well as laying bare the complexities, the chaos, and the internecine rivalry that dominate government departments in the delicate interplay of politics and war. I enjoyed the development of the characters and the dialogue.

Each character came with his or her history and motives, created in a believable and natural way. The author also has an excellent eye for visual detail to paint the picture of different environments for the reader. This is a must for lovers of political thrillers.

Born in Croatia, Stefan is now living in Melbourne, Australia. With a degree in computer science, he has had a highly successful career in the Information Technology industry. His passion for writing hard science fiction has produced several short stories and seven SF novels of the Shadow Gods saga. He has also written a political thriller Cry of Eagles and a suspense novel All the Evils, both to be released by Solstice Publishing.