Blackthorns of the Forgotten: There is a saying in my corner of the universe which loosely translated simply states that you do not fight what you cannot help. It also sends a prayer that may we never be confronted by what we do not understand.

I had to struggle hard to keep my eyes open for Bree was merciless in her determination that I take the full potion of her heady brew. In fact, I assumed Bree was male. I could not keep Gillean and Sully away from my vision and those times when I had to eat, became an agony. 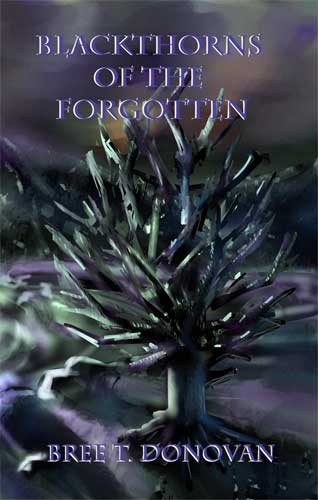 “Blackthorns of the Forgotten

” is a very powerful read indeed. Bree has explored in brilliant detail the many forces that shape us and how we may make choices that determine several lifetimes. It is about the threads of fate we sometimes unwittingly weave ourselves into and our ignorance of the true natures of the ethereal forces that surround us. She has given an indication that Man lives in a world he faintly grasps and he ignores these forces at his own peril. I felt I could lay a belt to Gillean and tar him with the hard part of my hairbrush, but ten I might be in tandem with Sully’s awful Dad.

I also lost patience with Adara and her ‘sacrifice’ which is the classic nature of all ‘good women’ to lay down and allow the man take them to the slaughter slab in the name of a love that could not be called practical or helpful. The characters were clear cut and faintly stereotype but Bree told such a brilliant, gripping story that you only noticed that at the end of the last page.

The characters from the awful Ciar, Shuffling Gillean, and frustrated Adara were solidly portrayed… then there was Sully. Lord, …I believe the Lord’s prayer went something like ..and deliver us from evil…. So we can help someone like Sully. Like some coffee stain, Sully stuck to the edges of my mind. Try as I might, Sully was the redemption of Gillean, the broken dream, the unfinished song, the whispering chill in the storm.. Guilty as charged.. for daring to be human while wearing the false robes of an angel? Or re-encounters?

That was a new name and concept on me. Sully was the pin and Gillean the canvas. The agony of a journey into a man’s soul and heart. The infinite struggle of the shadows in our lives, emotions we are scared about and definitions of love. These are the choices we make. I could not afford to overlook a word or phrase as Bree was unrelenting. Like a swift-flowing river, she swept me along. I was a willing victim howling my delight, chilled and thrilled every step of the tumultuous ride. I am African and we live in a seamless world with the elements, the elves and fairies, the gods and demons and this story is thus very plausible and gripping for me.

The portrayal of two sides of the world so thinly cloaked from each other resonated with me as well. Bree has made a very brilliant study of the complexities of the human soul and invited the reader to be hesitant about passing judgment. I would like to congratulate Bree and ..yes forgive her for keeping me on the edge of my seat, away from sleep and my dinner. I have a prayer that as the wind whispers to my soul, the song of man in his many journeys through the books of time, he will flip a page open for the angels, and my guardian angels should see the best page of my life. Now I know what hard work it can be, being an angel, ask Charlie, and check with Sully.

This book comes highly recommended by me.

Alan Place Jul 2, 2012 0
A Year in the Life of an Author: This month sees a lot of anniversaries for me. In the last year, my life has…
Publishing