Gerry McCullough, author of “Belfast Girls” and “Danger Danger” believes the most important thing in good prose writing is clarity. She credits a quote from George Orwell for reminding her that good prose is like a windowpane. She says, “I strongly dislike writing which is complicated, pretentious, and hard to follow.”

I’ve tried in my own writing to keep it simple and clear, without ending up sounding like someone addressing a child. At the same time, I believe there’s room in a novel for more than straightforward, clear prose.

The lyrical descriptive effects of poetry can add to the atmosphere; and I’ve often introduced poetic images and words in my descriptions. I think the mixture works well. The clarity moves the action along at a good pace, while the occasional poetic description draws the reader into the atmosphere of the book and the characters.” 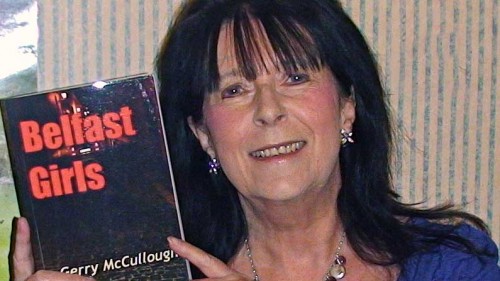 Gerry says writing plots that are a bit different and which work has always been her main difficulty. “Characters come naturally to me – but characters need to be doing something, and to think of things for them to do isn’t just as easy.

Like any skill, I’ve improved in this one the more I’ve used it. But I always need to go back and edit this aspect particularly carefully. It’s hard to get everything right the first time.

There are always holes to be patched, a time line which has to be accurate, a logical progression which must follow throughout the book.”

Gerry’s husband serves as her sounding board, but he doesn’t get a peek till Gerry has been through it six or seven times herself. “I’m always reluctant to let others see my work before I’m thoroughly happy with it myself.

When I put Belfast Girls on Authonomy, two years ago now, I found some of the comments upsetting, although the vast majority were very encouraging,” she says.

Gerry has been interviewed by and has written articles for local newspapers and literary magazines; appeared on local radio seven times so far; and uses the internet extensively. She says, “I’ve written guest posts for blogs, been interviewed on many others, and had my first book Belfast Girls posted on numerous listing sites.

I used both Facebook and Twitter, and have an extensive network of writing friends who are very supportive. The nearest I’ve come to paid advertising was to pay a nominal sum to two of these listing sites who were running ‘promotions’. In one case this was very successful, in the other much less so. What I mainly invest is time.

Since my first book, Belfast Girls, has sold nearly 2,000 copies in less than a year, I think I can say it’s paid off. But it’s hard to say which of all these efforts has been best, apart from the listing site, where I sold over a hundred books straight away and went to # 729 on Amazon.com. I’m trying to follow the same pattern with my new book, Danger Danger.”

Gerry has read a lot of indie authors, including Tom Winton, Sheila Mary Taylor, Stacey Danson, Janice Donnelly, Teresa Geering, Catherine Chisnall, Jessica L. Degarmo, George Polley, Drew Cross, Gordon Kuhn, Shah Wali Fazli, Anne R. Allen, Tim Roux and many others. “There are so many good writers now being published, after the block imposed by traditional publishers for too many years; and with ebooks at such a reasonable price, it’s possible to buy more than I’ve ever been able to afford previously.”

Gerry’s advice to aspiring writers? “Read a lot. You can learn your craft from other writers. Don’t give up. There will always be discouraging times when someone criticizes your work unfairly. But you need to develop a thick skin for this sort of thing. There will be encouraging times, too! Write every day, as nearly as possible. Set yourself a target. I try to write 1000 words a day.

Edit carefully. Mistakes in grammar and spelling are off-putting to most readers. The odd mistake is almost bound to remain, but try to get rid of as many as possible. And above all, as I’ve said above, don’t give up!”
Gerry appreciates the unfailing generosity and support that Indie writers supply to each other, saying it is a constant delight to her. Her two most current titles are Belfast Girls and Danger Danger—

Danger Danger has seven 5 star reviews on Amazon.com, and since it’s been out just over three weeks, Gerry is quite pleased with that. This title is available from

This is a short description:

‘Two lives in parallel – twin sisters separated at birth, but their lives take strangely similar and dangerous roads until the final collision which hurls each of them to the edge of disaster.

Katie and her gambling boyfriend Dec find themselves threatened with peril from the people Dec has cheated.

Jo-Anne (Annie) through her boyfriend Steven finds herself in the hands of much more dangerous crooks.

Can they survive and achieve safety and happiness?’

Belfast Girls has 30 reviews on Amazon.com with an overall rating of 5 stars; and has been reviewed very favorably in local literary magazines, being picked as Book of the Month by the Ulster Tatler. It was also Book of the Year on Night Publishing.

The story of three girls – Sheila, Phil and Mary – growing up into the new emerging post-conflict Belfast of money, drugs, high fashion and crime; and of their lives and loves. Sheila, a supermodel, is kidnapped. Phil is sent to prison. Mary, surviving a drug overdose, has a spiritual awakening.

Although from different religious backgrounds, starting off as childhood friends, the girls manage to hold onto that friendship in spite of everything.
A book about contemporary Ireland and modern life. A book which both men and women can enjoy – thriller, romance, comedy, drama – and much more ….

Gerry has had more than fifty short stories published in UK, Irish, and American magazines, anthologies and annuals – as well as broadcast on BBC Radio Ulster – plus poems and articles published in several Northern Ireland and UK magazines. Learn more about Gerry from her website and her blog. You can also find her on Facebook.

Posted on: November 14th, 2011 by Stephen Hise on his Indies Unlimited website.