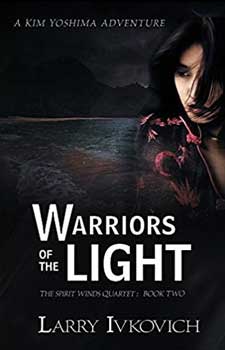 I’ve seen it happen often enough that a second book in a series just plain doesn’t measure up to the first. Not so with “Warriors of the Light.”
I finished reading “The Sixth Precept” and worried that there could very easily be a bobble in handling of a bad situation resolved and some mighty heroic characters moving into the second book with nothing much to do or worry about. Let’s face it; they got the job done in the first book, bad guys put away and nasty stuffed taken care of. I was happily surprised.
“Warriors of the Light” picks up not immediately, but some months after the end of the first book. Kim Yoshima has quit the police department and is living with Shioko, her semi-sister and fellow warrior, and, for as close as they were in the first book; things are not going so well for them now. Both are getting counseling and treatment for Post-Traumatic Stress Disorder after the fighting that took place in the first book. Wayne Brewster and Jackson Yamaguchi, the others who participated in the freeing of the city of Odawara from the clutches of Omori Kadanamora and his forces, are having their difficulties as well.

Mr. Ivkovich builds the action well, mounting the suspense in short narrative bursts, sometimes looking at the goings-on from the point of view of one of the heroes, sometimes from the POV of one of the non-hero/demonic characters. Those were interestingly portrayed, not so much as evil, as much as trying to obtain the things they needed to survive along with an over-arching desire to get away from the confusion that is 21st century Pittsburgh and back to the world where they belong. Unfortunately, there seems to be an instinctive understanding on the demonic forces’ part that they need Kim Yoshima and certain abilities of hers. Those abilities were important to the first book, but seemed to disappear once she returned from her adventure in 16th century Japan.
The denouement battle was interestingly constructed with that premise in mind and happily left enough of the resolution wide open in expectation of the next volume of the series.
“Warriors of the Light” was a lot of fun and, except for some minor bumps in couple of places, well-paced throughout. I would give it a solid 4.25 stars.
~ CK Stone

WARRIORS OF THE LIGHT

C.E. April, 2011
Kim’s senses flared, all her esper abilities coming “online.” The watcher wasn’t just someone but someone… non-human. The mental presence flickered but appeared of a uniquely exotic type. A yokai? One of the creatures at Spirit Winds, Inc. that had also been swept to Venice?
No, no, this one was different somehow, though Kim wasn’t sure why. This watcher’s aspect seemed more unusual, if that could be possible.

She concentrated her psi energy. She had been able to focus her mental “sight” before, when staking out the Horowitz Box Factory, letting her mind course through the factory corridors and rooms like an invisible camera. She attempted to utilize her power like that now.
Ah, yes. There it was, that locus of telekinetic-like force she could form and direct remotely. It was like an out-of-body experience, as if a part of her floated over the Grand Canal. Kim was aware of her immediate surroundings but, like looking through another “window,” she could see everything from a different vantage point, a different perspective.
She moved her remote vision higher. There… a figure stood on the flat roof of one of the palazzos. Kim “zoomed” in closer…
And jerked in surprise. Despite having seen and experienced things and events outside of what most people considered everyday reality, this sight still caught her off-guard.

The figure was tall, with wide shoulders and a broad chest. It wore some type of armor that looked to be made of leather and bamboo. Humanoid and bi-pedal, it possessed two arms, a man-like torso, and a head. But, that head! That face! Topped by a short, spiny crest and covered in feathery down with slanted, yellow eyes, the being’s mouth more closely resembled a beak, the tips of its fingers sprouting short talons.
Two large golden wings lay furled at its back.
Its head constantly moved, twitching slightly from side-to-side and up-and-down. Yet, Kim could see its eyes were directed steadily at her, its sparkling gaze fixed.
Abruptly, its jerking movements ceased. The avian-humanoid spread its wings and launched itself skyward as if knowing it had been spotted. Kim lost sight of the birdman instantly, its speed too great and unexpected for her to follow.

“Signora Yoshima?”
Kim sighed and shut down her remote sight. She had sensed the two men approaching but suspected they were from this Lenora Lazo had mentioned so hadn’t been concerned. Not having found her at the café, they had easily traced her movements here. Not bad.
“Si,” she answered, turning to face them. She checked a sudden laugh bubbling up in her throat. The two men looked like stereotyped “men in black,” dressed in dark suits, wearing sunglasses. “Gino and Luca, I presume?” she managed in halting Italian.

One of the men pointed to himself and said, “Gino.” He then pointed to his burly companion. “Luca.”
“Grazie,” Kim said, suddenly feeling very, very tired, despite the coffee. “Grazie.” She hoped the two men could see the relief on her face. She had had enough of cosmic traveling, fighting yokai, and mysterious avian watchers for one day.
“Take me to your leader,” she said in English and smiled. 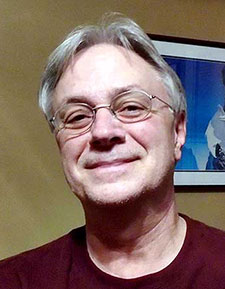