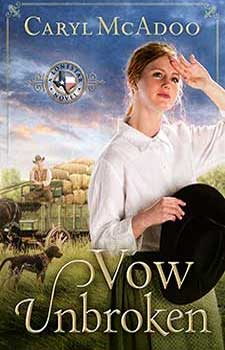 In 1832, young widow Sue Baylor has few choices to get her cotton to market after missing her chance to leave with the wagon train. She tries to talk her best friend Elaine into going along, but that’s not going to happen.

Susannah’s journey in Vow Unbroken had an unexpected stow-a-way. Me. I got so caught up in the author’s knowledge of Northeast Texas History and folklore, I couldn’t stop reading for fear they may leave me behind. The details were so true to life, I was really impressed.
I thoroughly enjoyed reading a Christian book that was historical and enjoyable. I would be thrilled to have Lifetime or Hallmark to make a series of Christian movies. This book is perfect.
By the way you are in danger of falling in love with Henry.
― Margaret Endicott

Just finished ‘VOW UNBROKEN’, a beautiful, entertaining, purposeful story. I got tears in my eyes, got ‘annoyed’ with Sue, and even convicted to examine my own heart. Thank you for putting pen to paper! Well done!
― Jessica Herrera

Loved the story and was also impressed with the accuracy of the Northeast Texas historical setting.
― Sharon Stephens

Elaine shook her head. “Sue, you simply cannot go. Listen to me! You and Levi cannot do this alone.” She leaned forward and held Sue’s eyes. “Now pay attention. It’s too dangerous. Anything could happen. There’s the Indians, thieves, and wild animals; the wagons or mules might break down. You’ll have the Sulphur River to cross, not to mention the White Oak Creek bottoms. What if you got stuck? What would you do then?”
“How about Larry going? I wouldn’t ask, but –”
“Please don’t, honey. You know he’s got way too much to do around here to be gone a month. We’ve already bought wheat seed, and our fields need a lot of work before they’re ready to plant.”
“Maybe I could hire someone in Cuthand, before I have to cross the river.”
“And you’d leave on that possibility. Come on, Sue.” Her friend’s eyebrows both went up, and her eyes, troubled only moments ago, suddenly sparkled. “I know! What about Henry Buckmeyer? I’m pretty certain he’s still around.”
“That lay-about heathen?”
“No, wait a minute. You shouldn’t judge him on all the gossip. I’ve known his mother for years, and she’s a wonderful Christian woman. Everyone speaks highly of her. I can’t imagine she didn’t raise her son in the faith. He could be the perfect one to help you.”
“So what if his mother’s a Christian? You’d really suggest I spend a month on the trace with a single man? What about abstaining from all appearances of evil?”
“What about Doug Howlett?”
“He and Shannan went with the others, and took Samuel and the girls along with them.”
Elaine looked off toward where the kids played and sighed. “What about Hershel Massey?”
Sue drew back and pursed her lips. “Now who’s crazy? He’s at least eighty years old!”
“Really? He sure doesn’t look it.” Elaine tucked a loose strand of hair back into her bun. “Well, what I know for certain, without any doubt, is that you cannot go alone.”
“But you refuse, and I have to get my cotton to the buyers. It’ll be the first time in all these years that we won’t be living on the razor’s edge. The first time since Andy passed that I’d have coin enough to actually buy more than just the bare necessities.” She angrily swiped at a stupid tear threatening to run down her cheek. “And if I don’t, and I can’t make any profits, I’ll have to start selling off the land. I just can’t do that, Elaine. So what do you suggest?” Elbows on the table, she hung her head, holding her face with both hands a minute, then looked back up. “Everyone I could’ve asked to help has already gone.”

The older woman dipped the fancy tea infuser that her mother had sent from back east in her cup. “There’s got to be someone. Let me think a minute.” 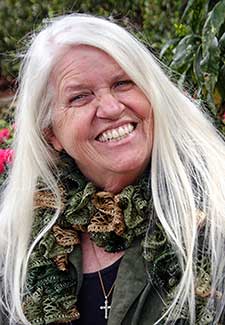 The novelist also edits, paints, and writes new songs. In 2008, she and her high school sweetheart-husband Ron moved from the Dallas/Ft. Worth Metroplex to the woods of Red River County. For more than ten years, four grandsons have lived with Grami—as Caryl is also known—and O’Pa.

The couple counts four children and fourteen grandchildren life’s biggest blessings believing all good things come from God. She hopes that VOW UNBROKEN will minister His love, mercy, and grace to all its readers. Caryl and Ron live in Clarksville, the county seat, in the far northeast corner of the Lone Star State.

Synopsis:  Susannah Baylor reluctantly hires Henry Buckmeyer to help her on the Jefferson Trace, a hard stretch of land between her Texas farm and the cotton market where she’s determined to get a fair price for her crop. It’s been a long, rough ten years, and the widow’s in danger of losing the land her husband and his brother left to her and the children. She’s got to get both her wagons safely to Jefferson. She knows Henry’s reputation as a lay-about and is prepared for his insolence, but never expects his good looks or irresistible, gentle manner.
Can Susannah and Henry’s love overcome their differences? In this heartening and adventurous tale, a young woman’s fortitude, faith, and heart are put to the ultimate test.