At the urging of her mentor Pulitzer Prize winning journalist Lionel Stone, Lark Chadwick leaves his Wisconsin newspaper the Pine Bluff Standard to accept a job as the Cops and Courts reporter for the Columbia Sun-Gazette in Western Georgia. Driving from her home, she is in Georgia desperately needing to take a leak. Lark leaves the highway and takes an isolated back road when a speeding vehicle forces her onto the dirt shoulder.

After stopping in a spot with no one around, Lark feels euphoric following her flooding the ground until she steps on a corpse. She calls 911, but the cops place her in the back seat of their car where she calls in the story to welcoming Columbia Sun-Gazette employee Marcie Peck. Columbia County Sheriff’s Department Detective Benson arrives at the scene, questions Lark and sends her on her way.

Accompanied by photographer Doug Mitchell, Lark continues to follow the story questioning the lead detective, and friends and family of the fifteen years old victim Rae Donovan. Meanwhile as a second murder occurs, the ambitious Governor pressures law enforcement to solve the homicide and the journalist she replaced fumes on his blog and at Lark at being unjustly fired.

Troubled Water is a fabulous journalistic investigative thriller due to the strong lead protagonist on her first job away from her Wisconsin home.

The whodunit is super, but it is fascinating realistic relationships between Lark and others; such as her with Lionel, Benson, Doug and others on the paper and the local residents; that make for a terrific mystery.
―  Harriet Klausner

The lilac sprig I clutched in my right hand had long since lost most of its spring-fresh scent. Three days earlier, as I began driving from Wisconsin to Georgia, I’d cut it from a lush lilac bush that shaded the graves of my parents. I never knew them. They died in a car accident a quarter-century ago when I was an infant. Annie, my father’s younger sister, raised me. We were like sisters. Now, she’s buried next to them — and that lilac bush.

Every few miles, I’d take another deep whiff so that spring in Wisconsin would stay with me – and in me – as I drove farther and farther into the Deep South. I’d never been to that part of the country before, so I had all kinds of preconceived notions of what life would be like living “down there.” After a long heart-to-heart with my friend and mentor, Lionel Stone, publisher of the Pine Bluff Standard, we agreed it was time for me to leave my reporting job at his paper and spread my wings.

Through Lionel’s contacts, I landed a job as a cops and courts reporter at the Columbia Sun-Gazette — a daily paper in west central Georgia about a hundred miles southwest of Atlanta and just across the river from Alabama. Lionel told me the paper had a reputation for scrappy investigative journalism that led to Pulitzer Prizes for reporters who then went on to prestigious publications like the New York Times where Lionel recently retired as the paper’s National Editor.

“It’ll be a good place for you to park for a while, kid until you’re ready to go on to the big time,” Lionel had said to me a couple weeks earlier when I was weighing the paper’s offer. Lionel won his Pulitzer in the early 1970s when he was the White House Correspondent for the Times during Nixon’s presidency.
About nine-thirty on this Saturday night, I was cruising down I-185 closing in on Columbia, but still in the boonies and having a heck of a time staying awake. I’d had so much caffeine that I was facing the law of diminishing returns – it seemed like the more coffee I drank, the sleepier I got. To entertain myself, I kept hitting the scan button on my radio to see what kind of nonsense could be strung together by the brief bursts of audio snippets. One particularly amusing string sounded like this:
“Governor Gannon’s presidential campaign got a boost today when he won the endorsement of — [fffftttt] — JAY-zuss. Thank you, Lord. Thank you, Lord, for your — [fffftttt] — Dodge Charger. It comes fully-equipped with — [fffftttt] — your own personal banker. That’s right. I’m here to ask — [fffftttt] — are you SAVED by the blood of the LAMB?”

After a while, that got boring, so I called Lionel because I can always count on him to keep my mind energized. We’d been yakking for a few minutes when my bladder began competing for my attention.

“Lionel, if I don’t stop this car right now, I’m gonna wet my pants.”
“You should’ve worn a diaper, Lark,” he chuckled.
“What are you talking about?”
“Don’t you remember the story about the former astronaut who drove cross-country wearing a diaper?” 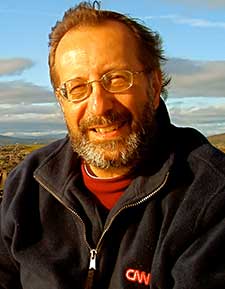 DeDakis is the author of two mystery/suspense novels (“Fast Track” and “Bluff”) published by ArcheBooks. His third and most recent novel, “Troubled Water,” was published on February 21, 2014 by Strategic Media Books.

A native of La Crosse, Wisconsin, he began his journalism career in 1969 at a campus radio station at the University of Wisconsin-Madison where he was tear gassed while covering an anti-Vietnam War riot in 1970. He earned a B.A. in Journalism from that university in 1977 following a stint in the U.S. Army where he worked from 1972-74 as a Special Events Reporter at The American Forces Network – Europe, based in Frankfurt, Germany. During that time he interviewed legendary film director Alfred Hitchcock.

DeDakis was CBN’s White House Correspondent during the last three years of Ronald Reagan’s presidency.  In addition to interviewing Reagan, John also interviewed former president Jimmy Carter.
In March 2013, DeDakis retired from CNN after a 25-year career there that began in 1988 when he joined the network as a writer.

John’s wife, Cynthia, a choral conductor, manages the chorister program at National Cathedral in Washington, D.C. She is a former national President of The Royal School of Church Music (RSCM) in America.