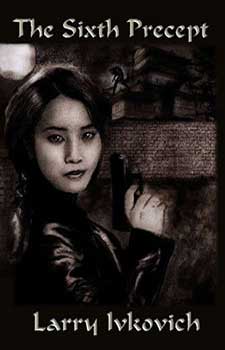 By Dwayne Russell:
I found much to admire about The Sixth Precept, by Larry Ivkovich. Its narrative is steeped in a particular culture that permeates and enriches the story – in this case, Japanese.  The mythology is complex and engaging, and the plot is beautifully intricate. There is enough right about The Sixth Precept that I can both recommend it, and mark its author as someone to watch.

Police lieutenant Kim Yoshima is our main character, even if we don’t meet her until several chapters into the novel. Though she lives and works in modern-day Pittsburgh, she has a deep respect for traditional Japanese culture which was carefully instilled in her by her grandmother.  Her family history is extremely colorful, including a series of fascinating incidents in medieval Odawara, Japan that involve a courtesan ancestor of hers who bears a striking resemblance to our heroine.

But at the beginning of our story, Kim doesn’t know very much about that, or about the ouroborosian nature of the adventure into which she is shortly to be drawn.

The best thing about The Sixth Precept is its plot.  For those who like fast-paced narratives, the book moves. For those who like intricate plots, its movement is purposeful.  Characters are reincarnated, or move between time periods…and yet Ivkovich never loses track of who is where and when.

Certain events get foreshadowed by the simple but effective method of having a character with a bit of historical knowledge (from their perspective) drop it into a situation where the events they’re talking about have not yet taken place. I paid very close attention to the implicit promises made in this manner, and they were all fulfilled.

It’s a masterful juggling feat that Ivkovich pulls off here, one that I found reminiscent of Brandon Sanderson at his most enjoyable.

One of the reasons I have long shied away from reading unknown authors is because the work can be frustrating, but I am rapidly discovering that there are also compensations. In this case, that would include the discovery of a raw but promising new voice. I’ll be back when it speaks again.

Kim heard the shot just as she was putting her briefcase into her car. She didn’t think twice, her instincts taking over. She pulled her Sig P228 and an extra clip from her backpack, threw the pack into the back seat and headed for the lot’s exit door.

The door had a special keyed locking system on the outside to keep possible intruders out. From within the parking lot, it was essentially an emergency exit. She looked up at the security camera stationed above the door and thought about contacting Joe, Lazo’s security head. No time, she decided. Besides, there was no need for two people to be in a possible line-of-fire. Once she took stock of the situation, she’d call for backup on her cell phone. She punched the button and as the door shushed open, exited the lot.

The humidity was all over her; heavy, moist air settling on her skin like a hot towel. It had stopped raining but the streets steamed; the glow of the streetlights cast an eerie luminescence throughout the empty block. She blinked, creeping into the shadows at the side of the garage and then, quickly, opened the section of gating outside the emergency exit and jogged out into the street.

No sounds. Nothing. The street was devoid of life.

That was when she saw the figure walk out into the light.

It’s her. The Yomitsu. The Eminent Lord be praised!

The shadow-tracker felt a thrill of another kind as he saw his target, gun in hand, crouching across the street. Her scent, even at this distance, filled him to the bursting.

I can take her, he thought, his head throbbing as he blinked the spots from his eyes. I can bring her back to the masters myself! The hell with their rules! The situation had become something entirely different. She was so close! Why shouldn’t he take advantage of this? The masters would know then, that despite his miscalculation on the three gang members, despite the wound he had incurred as a result, that he had still served his purpose.

Yes, he thought, rising to his feet. He would make his mark, no matter what. He walked out of the alley.

The silhouette was tall, lean, moving like a dancer, sinuous and mincing. The muted light revealed some kind of tight-fitting garment clinging to its body. Its hair was long, knotted into thin corn rows. Its eyes reflected the light as…yellow?

Something sharp glinted from the tips of its fingers.

What in heaven? Kim raised her gun. The figure stopped, its form backlit by a wavering glow from the alley behind it.
Trash fire? This one doesn’t look like your typical street person.

The figure began to move again, loping (yes, loping was the right word) toward her, its motion controlled and precise like a gymnast.

It was the face of an animal. 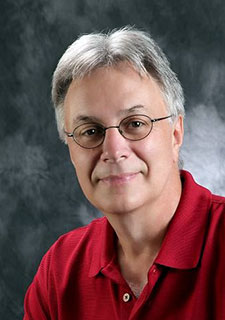 His science fiction story, Ghost Child, was published in the genre anthology, Shelter of Daylight, in December, 2011.

His fantasy adventure novella, Reunion at Olan, will be published next year by Wolfsinger Publications in print and ebook formats.

The newest publishing credit is to the online SQ Magazine for a story set in Venice, Italy – The Raptor and the Lion.

He has also been a finalist in the L. Ron Hubbard’s Writers of the Future contest.