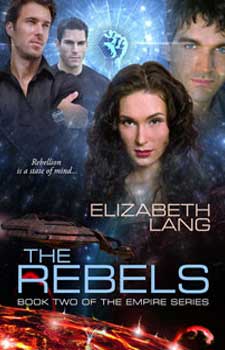 By Alice D. for Readers Favorite

“The Rebels, Book Two of the Empire Series” is first-rate science fiction that fans of the genre will not want to miss.

Bryce, Adrian Stannis, and Kali Mirren need to get away from the Empire, from Admiral Gwen van Reutensbrg and her cybernetic guardian, Spencer. Bryce, Adrian, and Kali escape from the jump gates and land on Orasis Quad, a Luo system planet which is a Tech 4 World on the Outer Rim.

The Empire wants Adrian, who is a computer technical genius and is number one on their lists of wanted “criminals.” Bryce, Adrian, and Kali find a long deserted cabin on Orasis and Adrian uses his technical skills to fix its interior mechanisms. Kali was once a rebel, a Tellaran with telepathic powers, but was banished for using her psi abilities to convince her people to take the alien invasion seriously.

Bryce has stolen goods in the past and was sentenced to fifteen years in the military as punishment. While Bryce and Kali flee on board a space ship, Adrian is taken by Drel Argus, a bounty hunter known as the Butcher of Kentara Three. On the space ship, Kali meets up with Jon Tucker, the famed rebel leader while she wants to save Adrian who now is confronted with not one, but two bounty hunters. But can they escape the Empire’s powers of detection?

“The Rebels” is an extremely well-written science fiction novel that has good dialogue among its characters that adds to the story line. The action alternates between Kali on the space ship and Adrian, now confronted with a wounded but murderous bounty hunter, and this back and forth telling only adds to the story’s plotline.

The characters of Adrian, Kali, Bryce, Jon Tucker, Drel Argus, Dr. Sam, and Charles Sester the psychostrategist whose loyalties are uncertain, are totally believable and the plot proceeds clearly to the story’s end which will hook even readers who generally don’t read science fiction.

“The Rebels” belongs to science fiction reading lists everywhere and its many fans will be awaiting Book Three in the series.

THE REBELS
By Elizabeth Lang

“Let’s get out of this hell hole!” Bryce bellowed. Fear bubbled in his stomach, flooding his mouth with the rank taste of yesterday’s vomit. He imagined faceless soldiers charging through the hallways like dark specters of death. One of them had a phaser burst with his name on it—he just knew it.

The jump gate flared, beckoning from the top of the platform, its undulating ripples of energy like a temptress luring him closer. He took a step, wincing at the traitorous clank when his feet hit the metal ramp. He felt like one of those legendary rats trampling each other as they abandoned a sinking ship, except that he was the only one running.

Banks of instrument panels winked red, signaling some dark secret. He hoped it wasn’t his obituary.
Cupping his hands to his mouth and bellowing above the intermittent whoosh of the energy coils, he cried, “The Admiral is coming! What are we waiting for? Let’s get out of here!”
The object of his warnings finally raised his head, tearing his attention from the small, wafer-thin device in his hands. Lieutenant Adrian Stannis looked at him blankly, a pale-faced ghost with hazel eyes that pierced right through him. The man might be his boss and a genius, but sometimes, he didn’t have much sense.

The woman beside him wasn’t any better. Kali Mirren seemed frozen, her smoky gray eyes filled with concern and her forehead etched like crushed velvet. With raven hair that cascaded past her shoulders and wine-red lips, she made her black uniform look sensual instead of intimidating.
Now, if only she would have better taste in men.

Kali touched Adrian’s arm and he blinked. The taut, finely-textured skin over his cheekbones relaxed slightly under her warm gaze. He long gave up trying to understand her effect on him, accepting it as inevitable, like a touch of serendipity.

She said, “We must leave before they get here. It’s our only chance to escape.”
He nodded, his sluggish mind clawing its way back from the clutches of a nightmare. “We must.”
Out of the corner of his eyes, he saw Bryce taking another step. The young man looked ready to bolt through the gate. Adrian was surprised he hadn’t already.
“I’m going,” the young man threatened. “I’m not waiting around to get caught.”

It was a sound idea, if not yet achievable. “The gate is charged but no coordinates have been set. Stepping through would simply return you to the location of origin.”
“Oh great. A one way trip to nowhere, like most of this year. Can you set the coordinates? Please? I’d like to get out of here before they shoot us.”
After the brutality of this past year, being shot was the least of Adrian’s worries. “They will not shoot us.”
“Oh yeah, they’re just going to put us in a cell and throw away the key. That makes me feel much better.”
Adrian scowled, wondering if irrational outbursts were always necessary or if this was simply a character flaw. “Your attitude is not helping.”
“Well, neither are you at the moment. We should be leaving, not staring at whatever that thing is. Do you like being a bull’s-eye? Because that’s what’s going to happen when the soldiers get here.”

At the mention of the ‘thing’, an icy shudder rippled through him. The transceiver reclaimed Adrian’s attention, mesmerizing him with its blankly staring screen. He squeezed it tighter, needing to feel the cruel edges digging into his palm.
It took all his self-control to stop from tearing into the back of his neck and ripping out the implant at the base of his brain. Even now, its insidious signals tugged at him like the strings of a marionette.
“Whatever it is, let it go,” urged Kali, her voice gentle but insistent. “You can deal with it later.”

If only he could. She didn’t understand about the implant; he hadn’t told her yet… Elizabeth Lang was born in Hong Kong and moved to Canada in the late ’60s.

She spent many years in IT, mainly in the insurance industry, and started writing late in life, but once begun, she couldn’t stop.

She was an avid reader from an early age. Science Fiction and Fantasy were, and still are her passions, with occasional dips in the pools of Mystery.

Her home base is in Toronto, but she has worked in many places around the world. She loves traveling, learning about different cultures, and sampling their delectable foods.

She writes mainly science fiction, thrillers/psychological dramas, though she did accidentally end up with a sci-fi romance novel. She swears she has no idea how that happened.

Elizabeth writes some humour, mainly wacky stuff that comes to her mind in the wee hours of the morning when her brain refuses to acknowledge being attached to the rest of her.

She has also dabbled in a bit of poetry, but barely enough to get her toes wet.

Elizabeth is a member of the Canadian Authors Association and the Saskatchewan Writers Guild.

This novel is the sequel to her novel, “The Empire.”

A Machine by Any Other Name
Sometimes a virus is all you need. Short story with Adrian and Kali of The Empire.

Let it Snow
A romantic short with Adrian and Kali of The Empire.

Super…Stars
Zaniness behind the scenes of a B-movie set.